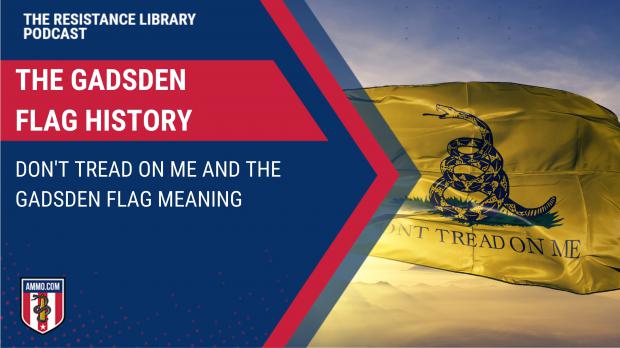 It's hard to miss the Gadsden Flag these days. Although it sprung back into popular American consciousness when the Tea Party first got its legs, this is a flag with a long and storied history. In fact, the flag is older than the United States itself.

Back in 1751, Benjamin Franklin designed and published America's first political cartoon. Called "Join Or Die," it featured a generic snake cut into 13 parts. The imagery was clear: join together or be destroyed by British power. But why a snake? Around this time, Great Britain was sending criminals over to the colonies. Franklin once quipped that the colonists should thank them by sending over shipments of rattlesnakes. As American identity grew, so did an affinity for American (as opposed to British) symbols. Bald eagles, Native Americans and the American timber rattlesnake – the snake depicted on the flag.

By the time 1775 rolled around, the rattlesnake was an immensely popular symbol of America. It could be found throughout the 13 colonies on everything from buttons and badges to paper money and flags. No longer was the snake cut into pieces. It was now recognizably the American timber rattlesnake, coiled into an attack position with 13 rattles on its tail.

The flag takes on a special historical significance at the Battle of Bunker Hill. This battle, still celebrated in Boston, is where Colonel William Prescott famously gave the order not to fire "until you see the whites of their eyes." One thing the battle underscored was that the Continental forces were woefully low on ammunition. In October of that year, the Continentals learned that two ships filled with weapons and gunpowder were headed for Boston. Four ships were commissioned into the Continental Navy, led by Commodore Esek Hopkins, ordered to get those cargo ships as their first mission.

In addition to sailors, the ships carried marines, enlisted in Philadelphia. Their drummers had drums featuring the yellow of the Gadsden Flag with the now well-known snake emblazoned on top. It included the words "Don't Tread On Me" –, a now-famous motto that adorns the clothing and accessories of freedom fighters from coast to coast.

In December of 1775, "An Anonymous Guesser" wrote a letter to the Pennsylvania Journal. While the letter is anonymous, most scholars now agree that it was written by Benjamin Franklin. This letter suggested, "As I know it is the custom to have some device on the arms of every country, I supposed this may have been intended for the arms of America."

Anonymous Franklin's reasons for such were as follows:

The rattlesnake is only found in North America.

The creature has "sharp eyes" and "may therefore be esteemed an emblem of vigilance."

The snake isn't known for unprovoked attacks. However, once it does attack, it doesn't stop until it wins.

What's more, even before attacking, the rattlesnake gives ample warning in the form of its rattle.

Franklin claimed in the letter that the snake's tail had 13 rattles, none of which would work independently of one another.

While Franklin didn't get his wish, the Gadsden Flag did find a place as the personal standard of Commodore Hopkins. No one is sure if his flag inspired the drums or if the drums inspired Hopkins. However, one thing is certain: the Gadsden Flag, by virtue of being Hopkins' standard, was effectively the first flag of the American Navy and Marines. He later presented another copy of the flag to the South Carolina legislature.

But what of the man himself? Who was Gadsden? Christopher Gadsden was the designer of the flag. He's known as "the Sam Adams of the South." Both a soldier and a statesman, Gadsden was a founding member of South Carolina's Sons of Liberty chapter. He served as a delegate to both the First and Second Continental Congresses. He left the Continental Congress in 1776 to serve as commander of the 1st South Carolina Regiment of the Continental Army. His legislative service continued in the Provincial Congress of South Carolina. And during the war, he was captured and served 42 weeks in solitary confinement after refusing to cut a deal with British expeditionary forces.

After the war, his health was in poor shape, primarily due to his time spent in an old Spanish prison. Gadsden was elected to the position of governor for South Carolina, but declined the position due to his health. He remained in the state legislature until 1788 and voted to ratify the United States Constitution. He died in 1805 and is buried in Charlestown. The Gadsden Purchase in Arizona is named for his grandson, who was a diplomat.

The Dont Tread on me Flag Today

Today you can find the Gadsden Flag and its variations throughout the conservative, libertarian and patriotic movements. The Tea Party waved it during their Obamacare protests in 2009. This is what caught the government's attention. A 2009 report from Missouri law enforcement called the Gadsden Flag "the most common symbol displayed by right-wing terrorist organizations." That same year in Louisiana, a man was detained by police simply for having a "Don't Tread on Me" bumper sticker on his vehicle. Christopher Cantwell and other libertarians have added the rattlesnake and "Don't Tread On Me" legend to the distinctive black-and-yellow anarcho-capitalist flag.

Over 250 years after its creation, the Gadsden Flag resonates because of its stark imagery and simple message. "Don't Tread On Me" with a rattlesnake poised to attack says all that needs to be said. It is not an aggressive posture, but rather a defensive one. It says to anyone who would tread on the liberties of free people to think twice. While free people are peaceful, their patience is not endless. Next time you hoist this flag up, don a hat with its image or throw a Gadsden Flag sticker on your car – remember that you're standing in a fine tradition that includes the first American Navy and Marines and the patriot after whom the flag is named.