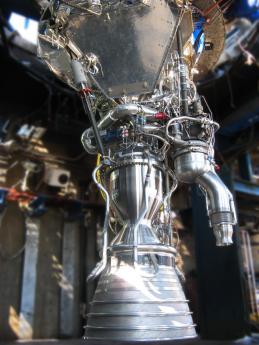 A Merlin 1C engine on Vertical Test Stand 1 at the SpaceX test facility
Hawthorne CA – February 27, 2008 – Space Exploration Technologies Corp. (SpaceX) announced today that it has completed the qualification testing program of its Merlin 1C next generation liquid fueled rocket booster engine for use in the Falcon 1 rocket. 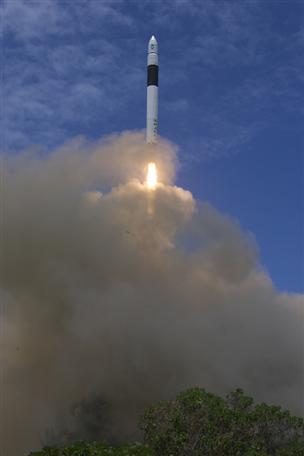 Tests were conducted at the SpaceX Texas Test Facility near Waco, TX, on a Merlin 1C configured for powering the first stage of a Falcon 1 rocket. After completing development testing in November of 2007, the qualification program began to verify the final design features on an actual production engine, clearing the way for full-scale manufacturing.

“Our propulsion and test teams finished the qualification program with a record-breaking day that included four full mission duration firings on the engine,” said Tom Mueller, Vice President of Propulsion for SpaceX. “This marathon run brought the total operating time on a single engine to over 27 minutes, which is more than ten complete flights. The engine meets or exceeds all requirements for thrust, performance and durability.” 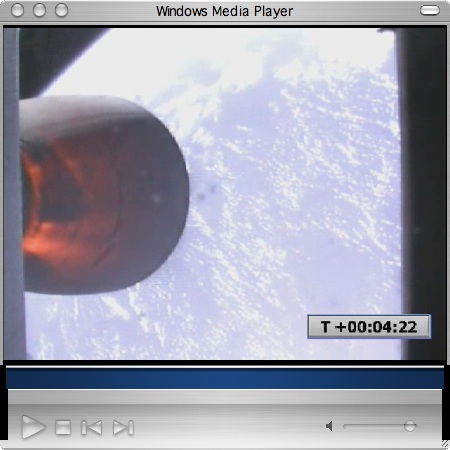 “This was the final development milestone required for the next Falcon 1 flight,” said Elon Musk, CEO and CTO of SpaceX. “In the coming weeks we’ll begin qualifying Merlin for the higher thrust and performance levels required by our Falcon 9 rocket, keeping us on track for delivering the first Falcon 9 vehicle to Cape Canaveral by year end.”

The single Merlin 1C will power SpaceX’s next Falcon 1 mission, scheduled to lift off in Spring of 2008 from the SpaceX launch complex in the Central Pacific atoll of Kwajalein. The far larger Falcon 9 uses nine Merlins on the first stage, and a single Merlin in vacuum configuration powers the Falcon 9 second stage. 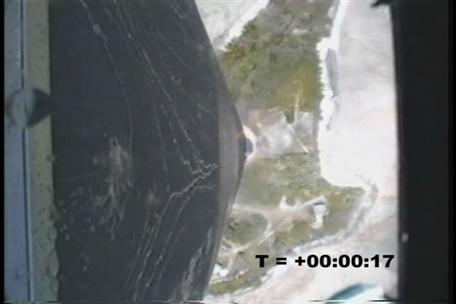 The Merlin 1C is an improved version of the Merlin 1A ablatively cooled engine, which lofted the Falcon 1 on its first flight in March 2006 and second flight in March 2007. The regeneratively cooled Merlin 1C uses rocket propellant grade kerosene (RP-1), a refined form of jet fuel, to first cool the combustion chamber and nozzle before being combined with the liquid oxygen to create thrust. This cooling allows for higher performance without significantly increasing engine mass.

In its Falcon 1 configuration, Merlin 1C has a thrust at sea level of 78,000 lbs, a vacuum thrust of 90,000 pounds and a vacuum specific impulse of 301 seconds. In generating this thrust, Merlin consumes 300 lbs/second of propellant and the chamber and nozzle, cooled by 90 lbs/sec of kerosene, are capable of absorbing 10 MW of heat energy. 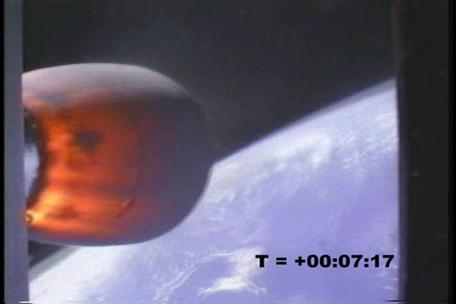 The Merlin engine is the first new American booster engine in ten years and only the second in over a quarter century. The prior two American engines were the RS-68 developed in the late nineties by Pratt & Whitney’s RocketDyne division, used in the Boeing Delta IV launch vehicle, and the Space Shuttle Main Engine developed in the late seventies, also by RocketDyne. With a production rate of one engine per week by late 2008, SpaceX will produce more rocket booster engines than the rest of US production combined and more than any country except Russia.

SpaceX is developing a family of launch vehicles intended to reduce the cost and increase the reliability of both manned and unmanned space transportation ultimately by a factor of ten. With its Falcon line of launch vehicles, powered by Merlin engines, SpaceX is able to offer light, medium and heavy lift capabilities to deliver spacecraft into any inclination and altitude, from low Earth orbit to geosynchronous orbit to planetary missions.

As winner of the NASA Commercial Orbital Transportation Services competition, SpaceX will conduct three flights of its Falcon 9 launch vehicle and Dragon spacecraft for NASA. This will culminate in Dragon berthing with the International Space Station and returning safely to Earth. When the Shuttle retires in 2010, Falcon 9 / Dragon will have the opportunity to replace the Shuttle in servicing the Space Station.