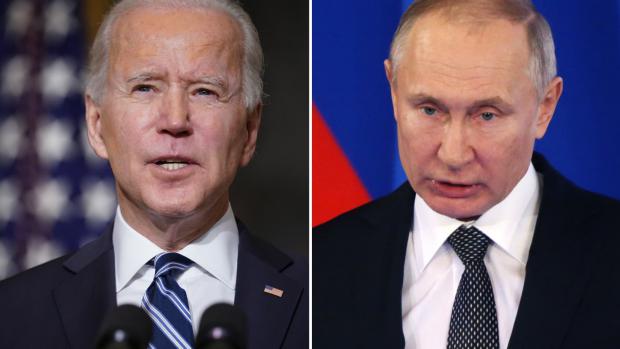 Both right wings of the US war party are perpetually at war by hot and/or other means against all nations free from their control.

Russia and China top their list for regime change because of their independence, prominence on the world stage, and ability prevent hegemon USA from controlling planet earth, plundering its resources, and subjugating its populations — especially united.

By no means did a few hours of talks suggest "that we must look into one another's souls, into one's eyes, and swear…eternal love and friendship. Not at all."

"We rallied European allies in a joint effort to impose costs on Russia for the use of a chemical agent against one of their citizens on Russian soil (sic).

"And we are preparing another package of (Illegal) sanctions to apply in this case as well."

"We have shown all along the way that we're not going to pull our punches, whether it's on SolarWinds (sic), or election interference (sic), or on Navalny (sic), when it comes to responding to Russia's harmful activities (sic)."

The Biden regime "also took the extraordinary step of signing a new executive order that gives (it) even more expanded authority when it comes to sanctions for Russia's harmful activities in the future (sic)."

Fact: No evidence suggests that Russia cyberattacked the US, interfered in its election process, poisoned CIA asset Navalny, or committed other wrongdoing against the US or West.

Claims otherwise by Biden regime and congressional hardliners, along with their press agent media, are bald-faced Big Lies.

A permanent US state of war on Russia by other means continues with no prospect for improved relations ahead, just the opposite.

On Sunday, Russian envoy to the US Anatoly Antonov departed from Moscow's Sheremetyevo International Airport en route to Washington.

Before leaving, he expressed "optimis(m)" based on Geneva talks he knows achieved nothing positive in bilateral relations.

Monday "and in the days to come, there are plans, scheduled meetings and lots of work. We are counting on progress (sic)."

Skilled diplomat Antonov knows what he's up against in dealings with hegemon USA.

Perhaps he'll return to Moscow ahead for more consultations after further Biden regime sanctions are imposed on Russia for invented reasons.

"We expressed concern over the EU's policy towards our countries, which cannot be considered constructive (or) sound policy," adding:

"We spoke about (US-dominated) NATO's actions, that the alliance is trying to aggravate the situation on our common European continent."

"We assessed the ongoing NATO military exercise, Defender Europe 2021, as a demonstration of the alliance's aggressive intentions."

Lavrov also expressed concern about "future (Pentagon deployment) of intermediate and shorter-range missiles, taking into account that the US withdr(ew) from the (INF) treaty, prohibiting the deployment of such ground-based weapon systems."

As for Antonov's return to Washington on Sunday, Lavrov called it "primarily a symbolic gesture."

While discussions can take place in the US capitol on issues related to bilateral relations, Lavrov noted that dealings with its ruling regimes are never easy.

He pointed out that the Obama/Biden regime illegally seized six Russian diplomatic properties in the US, adding:

Since 2016, "we are not even allowed to see what is happening there, which is contrary to all diplomatic conventions and American laws."

"Then many of our employees were expelled in groups. Of course, we took tit-for-tat measures."

Nothing in Geneva was achieved toward improving bilateral relations.

Lavrov "read comments by US officials on Geneva talks, including (by) participants in" Geneva, adding:

"They are trying to claim that they said it is necessary to return personnel to ensure the work of the embassy, compel Russia to reply to the accusations of hacking the US infrastructure, and force the release of the Americans that are serving prison terms" for their criminal actions.

"This is not the approach (that Putin and Biden's double) spoke about."

"It would be wrong for the Americans to think that if the ambassadors are returned, Russia will do everything the US wants, and then they will probably discuss" various issues of disagreement.

They can only be resolved "on a mutually acceptable basis," Lavrov stressed — knowing hegemon USA demands everything in return for hollow promises to be broken.

Lavrov's remarks came before Sullivan said more illegal US sanctions are being prepared against Russia.

When announced, they'll be another example of dismal bilateral relations that worsened after Biden replaced Trump by brazen election rigging.