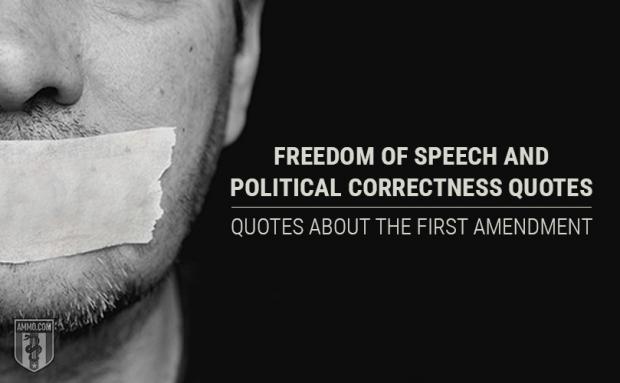 Freedom of Speech and Political Correctness Quotes: Quotes About the First Amendment

Before the term "politically correct," there was a term known as "freedom of speech" – and every American had it. When our voices are silenced, our freedoms, our Constitution and our country are all at stake. These quotes challenge the mainstream media's demand for political correctness.

Quotes on Freedom of Speech

"Why does the left hate free speech? Because they don't know how to talk about the substantive merits when they are challenged. Having submerged themselves in disciplining each other by denouncing any heretics in their midst, they find themselves overwhelmed and outnumbered in America, where there is vibrant debate about all sorts of things they don't know how to begin to talk about. They resort to stomping their feet and shouting "shut up"... when they aren't prissily imploring everyone to be "civil."" 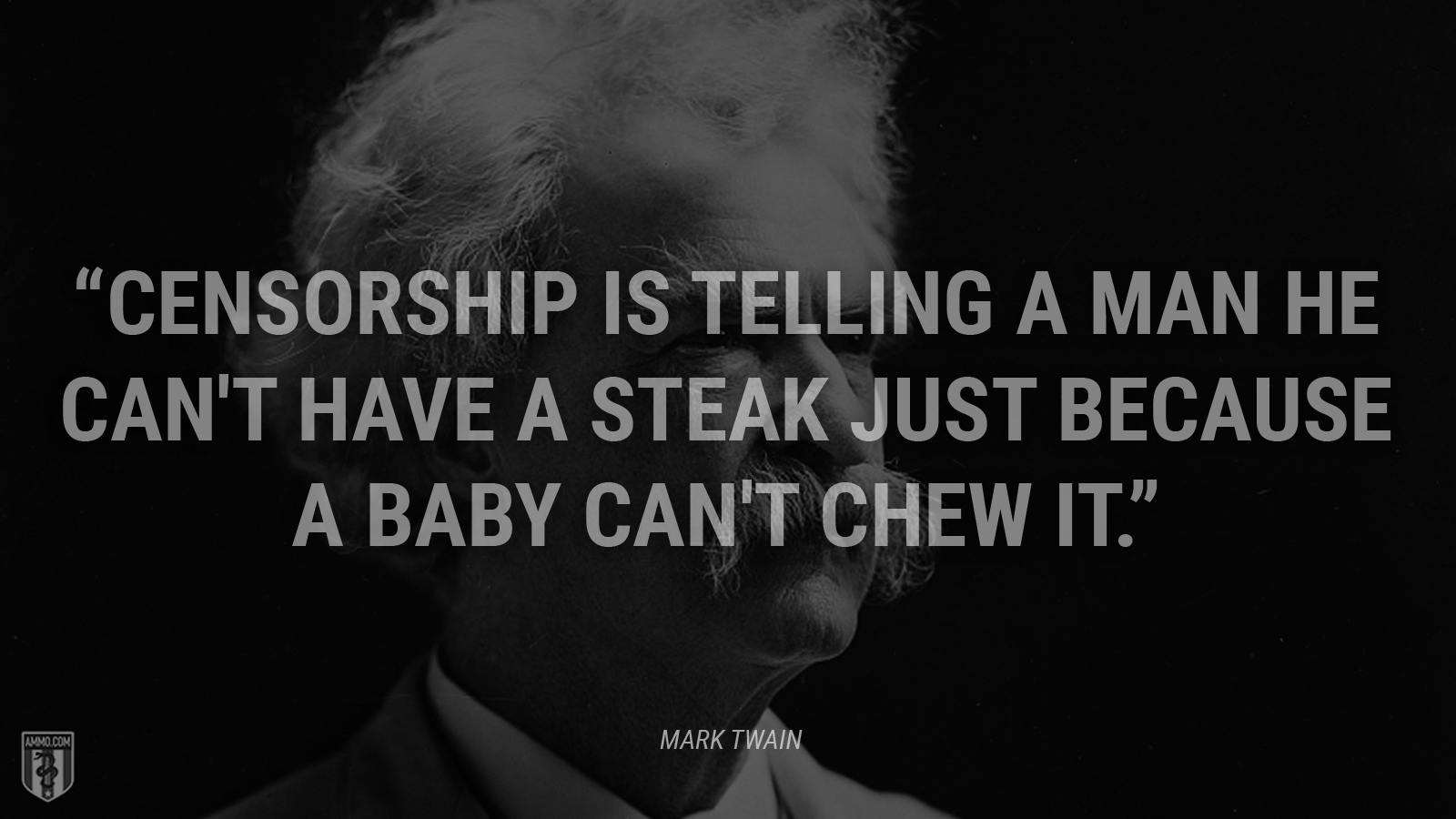 "Censorship is telling a man he can't have a steak just because a baby can't chew it."

"The right to speak freely does not include the right to be taken seriously.  And it certainly doesn't include the obligation that others must supply you with a platform." 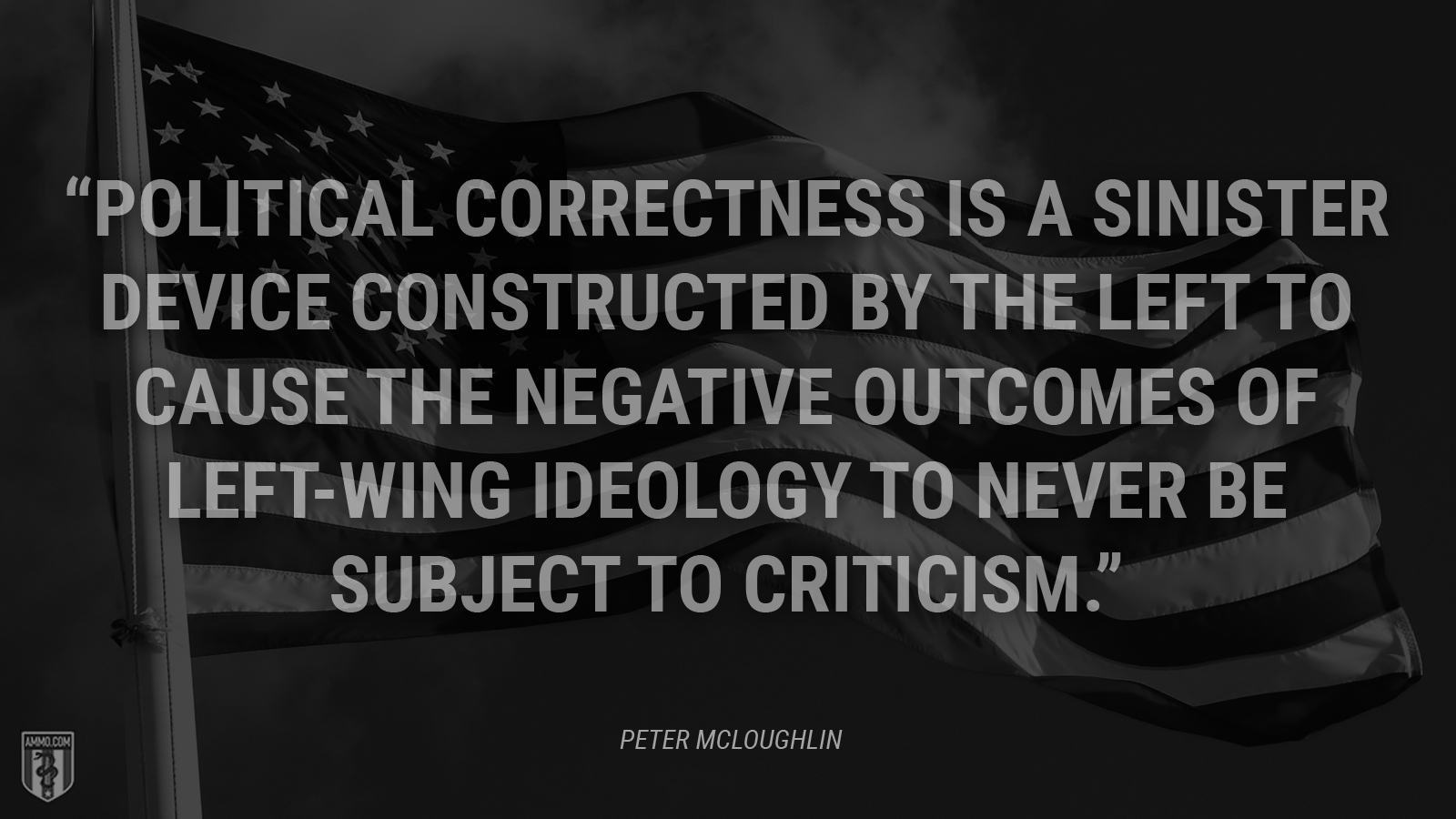 "Political correctness is a sinister device constructed by the left to cause the negative outcomes of left-wing ideology to never be subject to criticism."

"Freedom of speech is useless without freedom of thought. And I fear that the politics of protest is shutting out the process of thought, so necessary to rational discussion. We are faced with the Ten Commandments of Protest:

"Thou Shalt Not Allow Thy Opponent to Speak."

"Thou Shalt Not Set Forth a Program of Thine Own."

"Thou Shalt Not Trust Anybody Over Thirty."

"Thou Shalt Not Honor Thy Father or Thy Mother."

"Thou Shalt Not Heed the Lessons of History."

"Thou Shalt Not Write Anything Longer than a Slogan."

"Thou Shalt Not Present a Negotiable Demand."

"Thou Shalt Not Accept Any Establishment Idea."

"Thou Shalt Not Revere Any but Totalitarian Heroes."

"Thou Shalt Not Ask Forgiveness for Thy Transgressions, Rather Thou Shalt Demand Amnesty for Them." 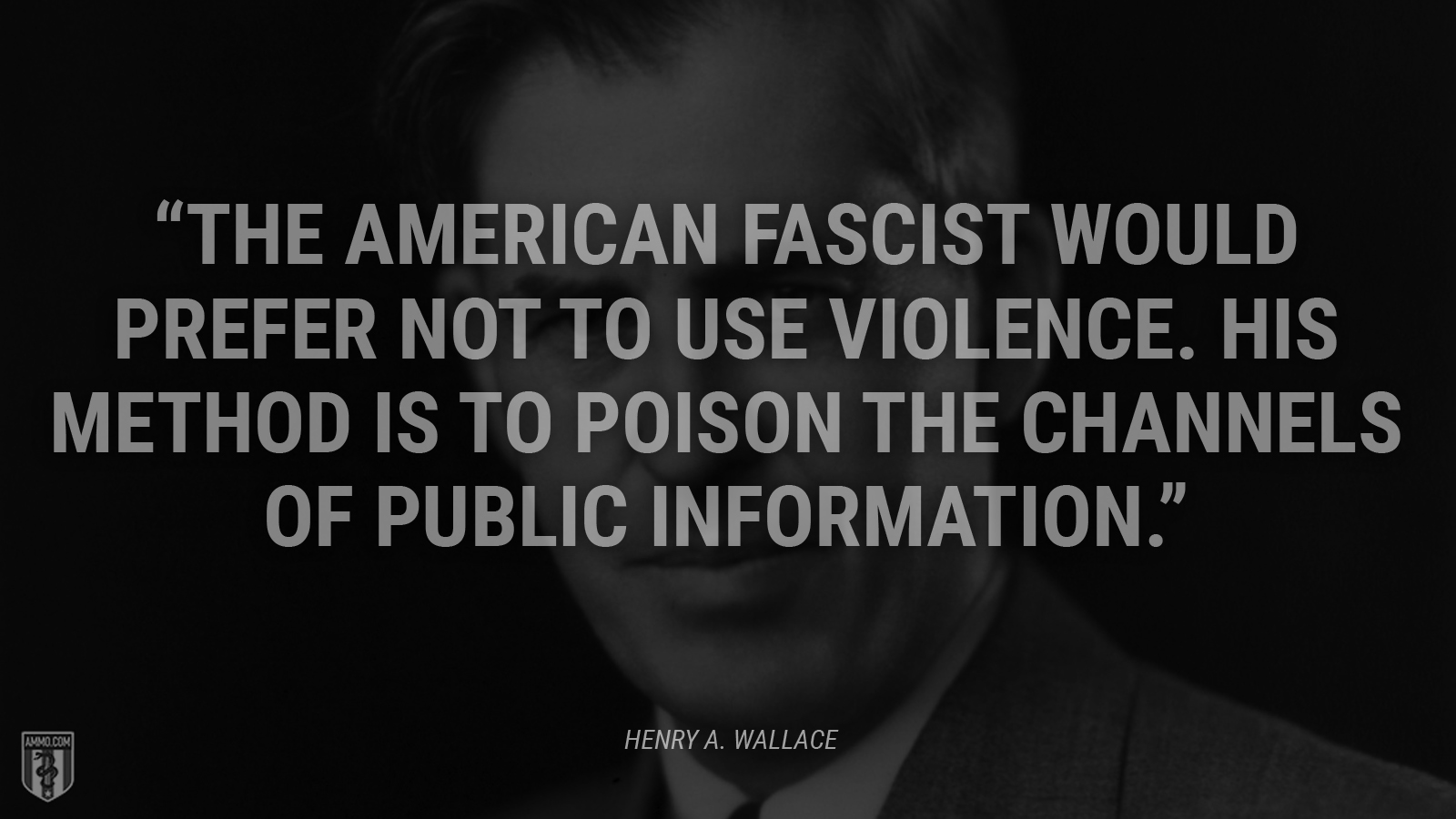 "The American fascist would prefer not to use violence. His method is to poison the channels of public information."

"The reason I'm defending freedom of speech is because that's how people with different opinions settle their opinions in a civil society and if we lose that we'll lose so much, you can't imagine.

It's as a consequence of free speech and the ability to speak, that people can put their finger on problems, articulate what those problems are, solve them and come to a consensus and we risk losing that. Now, the radical Left activists are trying to turn this into an argument about sexual politics, and it's only nominally about sexual politics. It's about language that's designed to control our freedom of expression."

"I believe that political correctness can be a form of linguistic fascism, and it sends shivers down the spine of my generation who went to war against fascism."

"Political correctness is a doctrine fostered by a delusional, illogical minority, and rabidly promoted by the mainstream media, which holds forth the proposition that it is entirely possible to pick up a turd by the clean end." 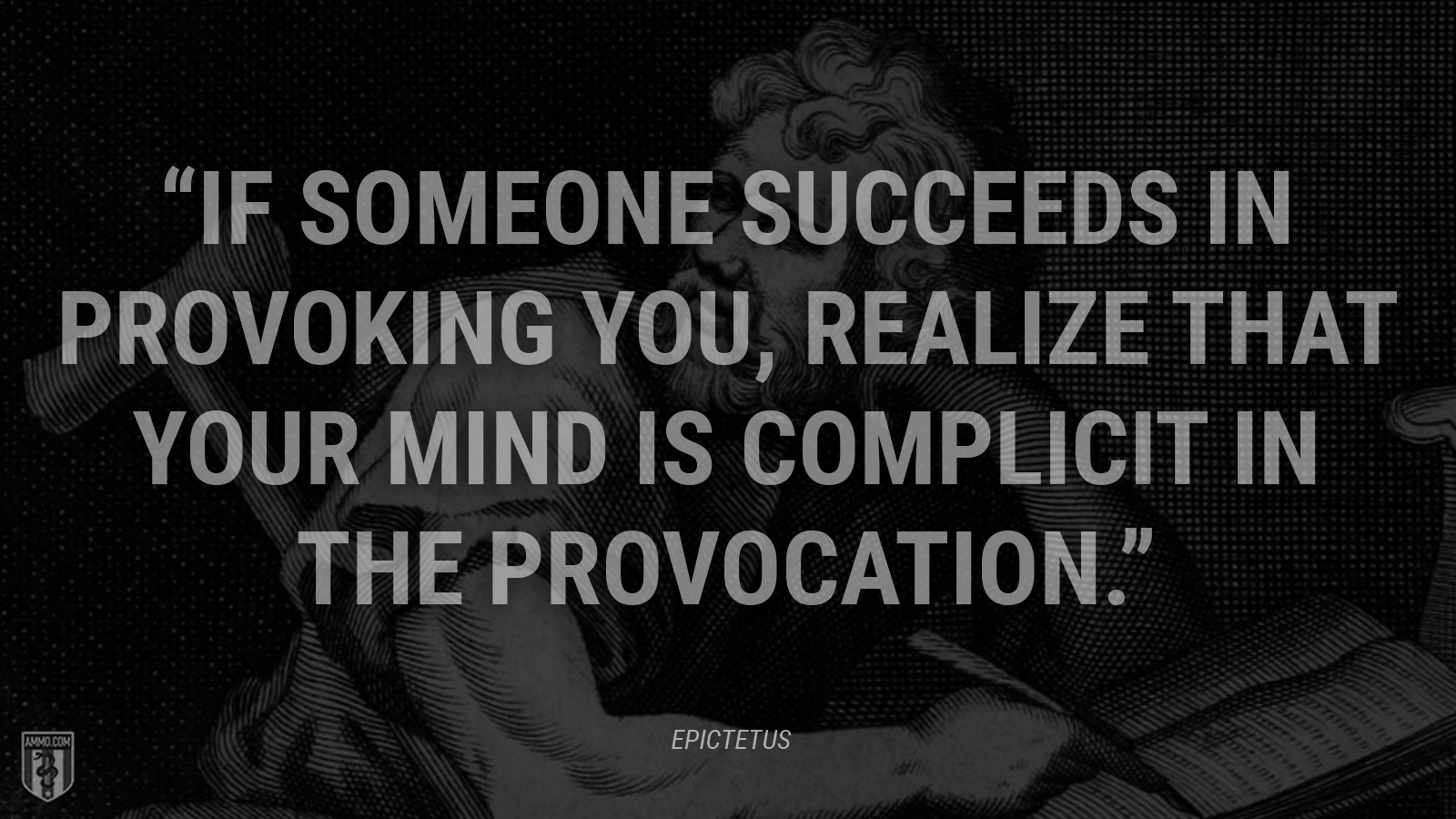 "If someone succeeds in provoking you, realize that your mind is complicit in the provocation."

"A joke is either funny or it's not funny. If I hear a funny joke, you know what I do? I laugh, that's what I do. I don't start a focus group to see who got hurt by the joke."

"The Bill of Rights does guarantee free speech, but it did not anticipate the notion of total anonymity. Free speech assumes that the speaker is known, that what is said depends on who the speaker is and what the speaker has said in the past – that is, the character of the speaker. All that is impossible through these new mediums like social media. One person can pretend to be 20 people by opening multiple accounts, and each can have their real identities hidden or claim someone else's identity. The Founders did not expect speech to be divorced from responsibility. Social media specializes in it."

"There is more than one way to burn a book. And the world is full of people running around with lit matches."

Ray Bradbury, speaking on current culture in the afterword of the 50th anniversary addition of Fahrenheit 451 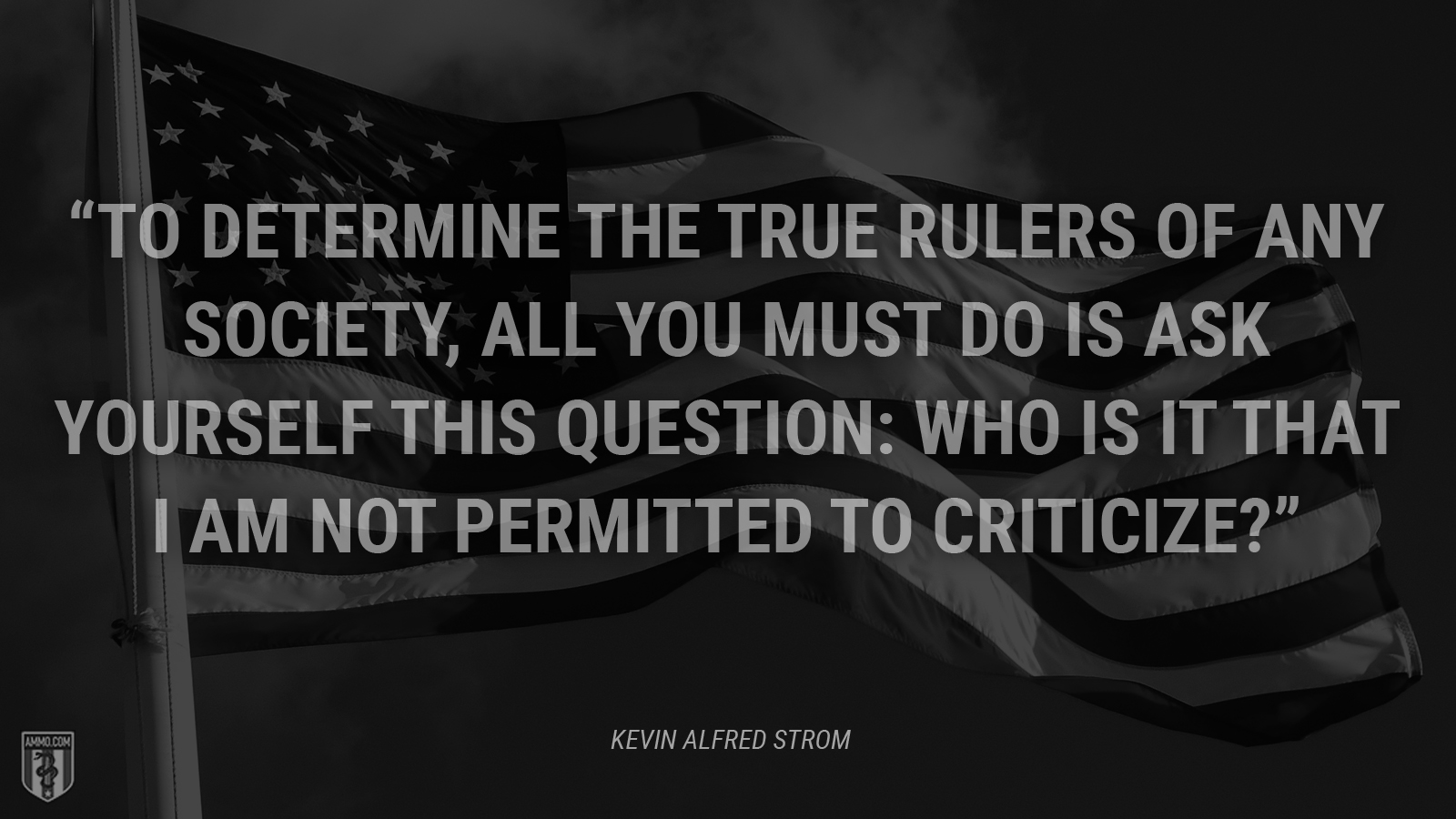 "To determine the true rulers of any society, all you must do is ask yourself this question: Who is it that I am not permitted to criticize?"

"Political tags – such as royalist, communist, democrat, populist, fascist, liberal, conservative, and so forth – are never basic criteria. The human race divides politically into those who want people to be controlled and those who have no such desire. The former are idealists acting from highest motives for the greatest good of the greatest number. The latter are surly curmudgeons, suspicious and lacking in altruism. But they are more comfortable neighbors than the other sort."

"Truth does not become more true by virtue of the fact that the entire world agrees with it, nor less so even if the whole world disagrees with it." 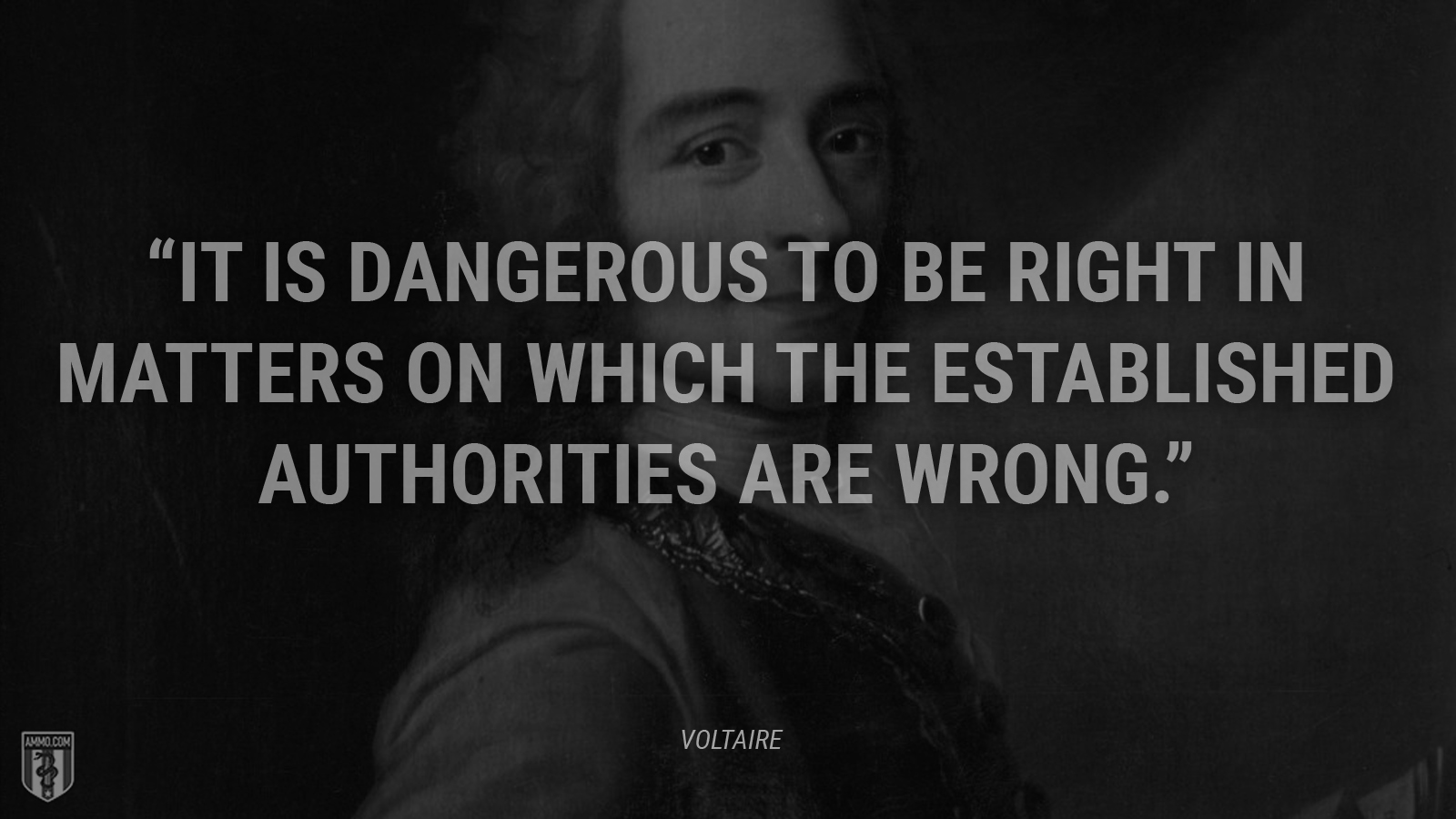 "It is dangerous to be right in matters on which the established authorities are wrong."

"The smart way to keep people passive and obedient is to strictly limit the spectrum of acceptable opinion, but allow very lively debate within that spectrum..."

"Debate refines a good idea. That's why we have two major parties in Congress. Somebody says, "I have a great idea for the country." We say, "Wonderful! Put it on the table. Let's debate." And we start the debate by questioning the guy who has this great idea. After the third question he says, "I withdraw my great idea. I forgot about those three questions.""

Jim Rohn, "The Treasury of Quotes"

"We (as a society) have to be committed to defending free speech however impolitic, or unpopular, or even wrong because defending that is the only barrier to violence. That's because the only way we can influence one another short of physical violence is thru speech, thru communicating ideas. The moment you say certain ideas can't be communicated you create a circumstance where people have no alternative but to go hands on you." 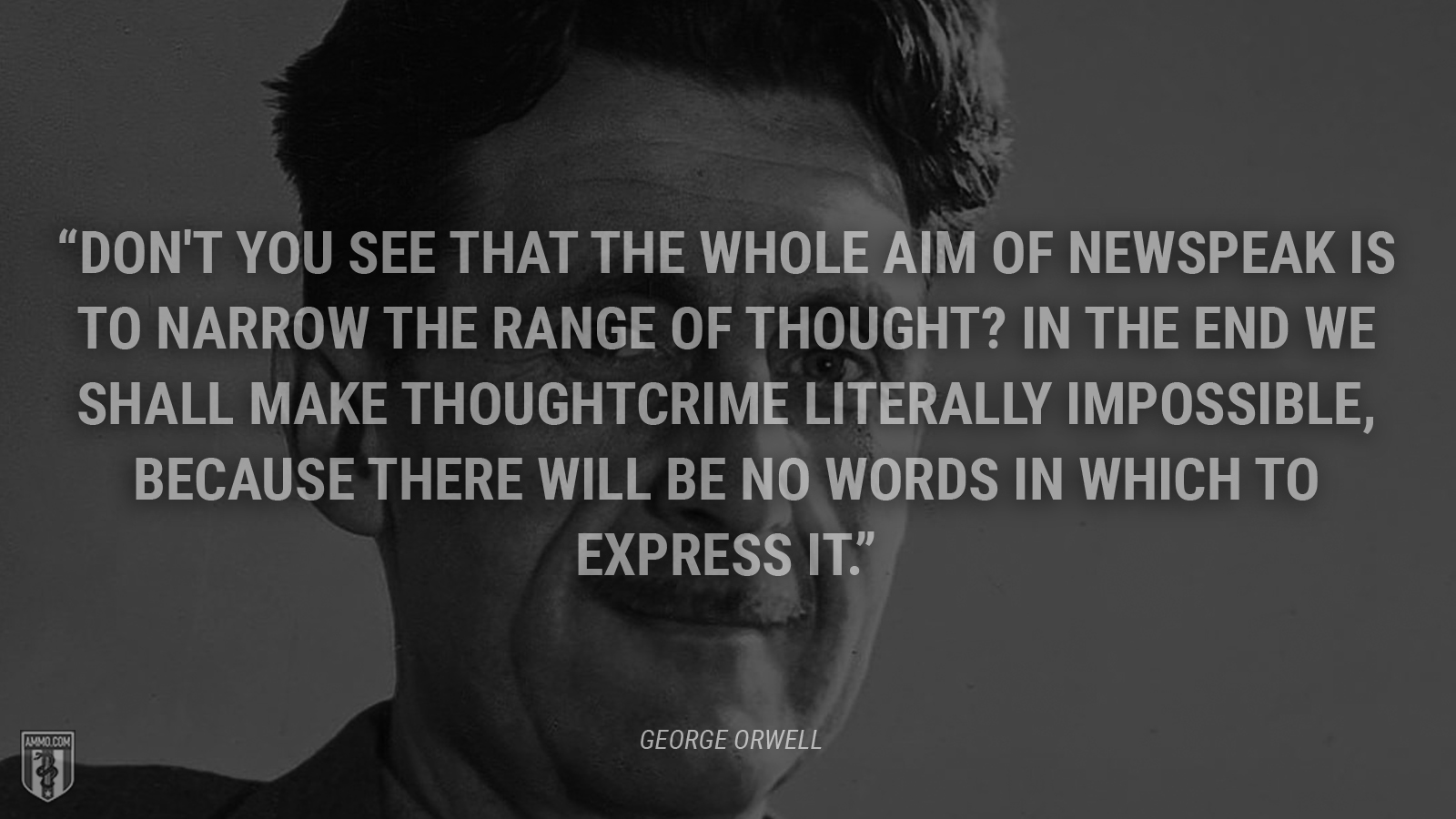 "Don't you see that the whole aim of Newspeak is to narrow the range of thought? In the end we shall make thoughtcrime literally impossible, because there will be no words in which to express it."

"There was of course no way of knowing whether you were being watched at any given moment. How often, or on what system, the Thought Police plugged in on any individual wire was guesswork. It was even conceivable that they watched everybody all the time."

Freedom of Speech and Political Correctness Quotes: Quotes About the First Amendment originally appeared in The Resistance Library at Ammo.com.