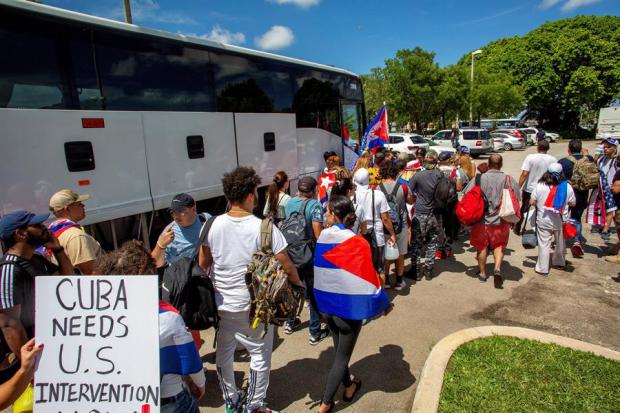 International, constitutional, and US statute laws never interfere with its diabolical aim to control other nations, their resources and populations by brute force if other methods fail.

Biden regime orchestrated protests in Cuba were likely prelude for tougher tactics to follow — with regime change in mind.

Biden's impersonator suggested it. So did interventionist Blinken, including on Friday, saying:

The Biden regime will "continue" to impose (illegal US) sanctions on Cuba along with other hostile actions.

Defying reality, he falsely claimed that actions taken and planned aim to help "the Cuban people" — ignoring harm from over six decades of illegally imposed US embargo on the country.

Biden regime and congressional hardliners are allied in wanting Cuba transformed into a US vassal state.

Aggression on the island state and its people is supported by some hostile to peace Republicans and Dems.

"We do it knowing the consequences, but the bloodshed will be much greater if that doesn't happen (sic)."

"We should've been in Cuba many many years ago…No doubt about it…We have a great opportunity now (sic)."

"If it takes the force and strength of the US, it should be used to free those people," Sacco roared.

Days after Biden regime orchestrated protests in Cuba, son of a Cuban immigrant Senator Marco Rubio said: "We have to act now."

"What's the point of having this superb military (we're) always talking about if we can't use it?"

On Thursday, the American Conservative (AM) headlined:

It's been blocked since Washington's illegal 1962 embargo.

Yet AM dubiously claimed that "(t)he Authorization for the Use of Military Forces Against Cuba to Ensure the Delivery of Humanitarian Aid (sic)" calls for what the vast majority of congressional members oppose.

According to Mooney's office, he hasn't introduced legislation on Cuba with any aims in mind.

AM said it contacted Scott's office to comment on the above but got no response so far.

"With the same hatred directed for years against the Cuban people and its Revolution, the US (regime) is now calling for the destruction and death of an entire people," adding:

"Representatives of the anti-Cuban right wing are demanding that (the Biden regime) take concrete action against Cuba, including the option of 'military intervention.' "

On Friday while meeting with Maintenance Enterprise workers involved in stabilizing electricity generation, Cuban President Miguel Diaz-Canel stressed that "the Revolution will always be on the people's side."

"Everything the Revolution does is for the people" — in stark contrast to exploitation, repression, and aggression by US/Western regimes.

Biden Regime Escalates War on Cuba by Other Means

Cuba Demoted To "Not Real Socialism"