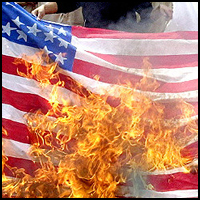 While looking through an old issue of Pastor Butch Pugh’s MINUTEMAN NEWS (www.pastorbutch.com), I ran across a six-page article explaining how to “destroy a nation.” The author left no signature so I cannot give credit that is due for this exceptionally great piece. Since space in the Chronicle is limited, I picked the most important aspects to share with you.

The article begins with, “If I were given the power to take down a nation, how would I do it?”

Control the nation’s monetary system. Tax the population, incurring massive debt. Institute various handouts. Kill the unions that demand livable wages, medical benefits and pensions. Close down local industries, and ship them overseas, if workers balk at lower wages… Shut down mills, plants and shops and send them to foreign lands where labor costs are mere pennies. Import foreign workers for one third of American wages.

Move major decision making to the executive branch, using Presidential Directives and Executive Orders. Pit American workers against immigrants to keep the focus off the various trade agreements; the more hatred and chaos, the better. The people must never see these issues as pertaining to class, but rather intolerance, racism and bigotry.

Limit any real choices in voting, keeping the field limited to a two party system, where only the wealthy need apply. Both parties will be given scripted talking points so they don’t address the real issues facing Americans. Keep up the pretense of a representative democracy.

Set up a dysfunctional Department of Education to dictate to the states insane mandates, regulations and policies to dumb down the future generation. A dumb population is an easily controlled population. Mental illness centers will become a major part of education. Saturate the land with drugs till the land is awash with mind numbing, brain damaging chemicals. Name peace officers “law enforcers” and gradually militarize them. Citizens should FEAR the police, not welcome their presence.

Allow the HMOs, Pharmaceuticals and Insurance companies to destroy what was once an affordable medical system. The focus will be on profits with exotic drugs being offered in lieu of preventive medicine. Make retirement an impossibility for seniors and those with fixed incomes or pensions. Encourage them to embrace “death with dignity.”

Waco, Ruby Ridge, school shootings, road blocks, identity theft, color coded fear days, security cameras and drug sniffing dogs will be used to cause confusion, resulting in more laws and violating the rights of a once carefree population. Limit or totally prevent information, rational discourse and debate on all sides of an issue. Corporate control of the media is a must if citizens are taught what to think – not how to think.

All authority and decision-making should be in the hands of corporate interests.

All this I would do if I were to destroy a nation and no one would have a clue as to the final objective. The few who do object will be labeled “conspirators, crazies, fringe, extremists, communists, un-American and traitors.” Nobody wants to be labeled “other”; not in group-think, that would make that person “the turd in the punchbowl!”

Permission to reprint granted to Barbara H. Peterson by:

The Unspoken Strife of Conspiracy Realists: You Are Not Alone

Bill Gates Wants "conspiracy theories" About Him To Go Away

THE TRUTH About Mass Shootings in America - Season 1, Ch.1: Time to Wake Up