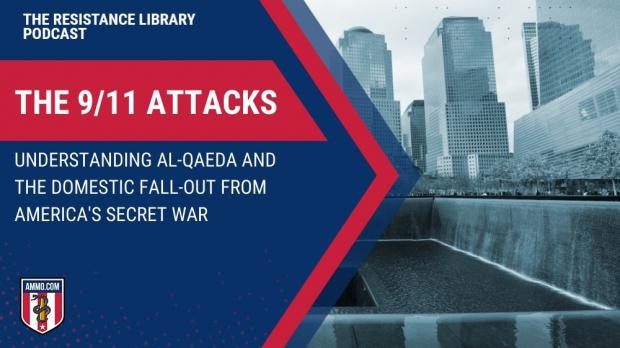 The 9/11 Attacks: Understanding Al-Qaeda and the Domestic Fall-Out from America**Q**s Secret War

On this episode of The Resistance Library Podcast, Sam and Dave discuss the 9/11 attacks, Al-Qaeda, and the domestic fall-out from America's secret war. With American military personnel now entering service who were not even alive on 9/11, this seems an appropriate time to reexamine the events of September 11, 2001 – the opaque motives for the attacks, the equally opaque motives for the counter-offensive by the United States and its allies known as the Global War on Terror, and the domestic fall-out for Americans concerned about the erosion of their civil liberties on the homefront.

Before venturing further, it's worth noting that our appraisal is not among the most common explanations. Osama bin Laden, his lieutenants at Al-Qaeda, and the men who carried out the attack against the World Trade Centers and the Pentagon are not "crazy," unhinged psychopaths launching an attack against the United States without what they consider to be good reason.

Nor do we consider then-President George W. Bush to be either a simpleton, a willing conspirator, an oil profiteer, or a Machivellian puppet whose cabinet were all too happy to take advantage of a crisis.

The American press tends to portray its leaders as fools and knaves, and America's enemies as psychopathic. Because the propaganda machine hammered away so heavily on the simple "cowardly men who hate our freedom" line, there was not much in the way of careful consideration of the actual political motives of the hijackers, the Petro-Islam that funded them, the ancient, antagonistic split between Sunni and Shi'a, the fall-out from the 1979 Iranian revolution or the 1970s energy crisis, the historical context of covert American involvement in the Soviet-Afghan War and the Iran-Iraq War of the 1980s, nor the perceived "imperialist humanitarianism" of American military adventures of the 1990s in Muslim nations like Bosnia, Iraq, Somalia and Kosovo. Alone, none of these factors were deadly. Combined, they provided a lethal combination.

It is our considered opinion that the events of 9/11 and those that followed in direct response to the attacks – including the invasion of Iraq – were carried out by good faith rational actors who believed they were acting in the best interests of their religion or their nation. There are no conspiracy theories here; sometimes truth is stranger than fiction.

This opinion does not in any way absolve the principals from moral responsibility for the consequences of their actions. It does, however, provide what we believe to be a more accurate and nuanced depiction of events than is generally forthcoming from any sector of the media – because we see these principals as excellent chess players who, in the broad sweep of events, engaged in actions which are explicable.

You can read the full article "The 9/11 Attacks: Understanding Al-Qaeda and the Domestic Fall-Out from America's Secret War" at Ammo.com.

And check out our sponsor, Libertas Bella, for all of your favorite 2nd Amendment apparel at LibertasBella.com.