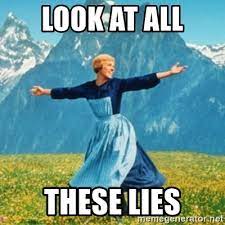 The NYT, CNN, National Pentagon Radio (NPR) Britain's BBC, Canada's CBC, and virtually all other US/Western MSM are complicit with state-sponsored mass-murder on an unparalleled scale.

Never before in world history did dark forces anywhere plot anything as recklessly diabolic as what's been going on since last year.

Instead of condemning what no one should tolerate, US/Western MSM cheerlead irreversibly harming and mass-eliminating countless millions of people — with hundreds of millions, likely billions, more in mind.

Jabs designed to harm health — with culling world community populations in mind — offer nothing beneficial, no protection to health, no degree of immunity from any disease.

On Monday, the NYT willfully and maliciously lied like always on all things flu/covid and other major issues.

Nothing it reports can be taken at face value.

Reports on everything important should be dismissed as fake news.

Its rushed to market, inadequately tested, experimental drug — falsely called a vaccine — "has been shown to be safe and highly effective in young children aged 5 to 11 years (sic)."

False! It's toxic and health-destroying!

It's irreversibly harming everyone jabbed with what's crucial to shun.

Instead of setting the record straight, the Times continued its daily drumbeat of Big Lies and mass deception on all things flu/covid.

It lied claiming the need to jab everyone, including young children, "is urgent (sic)."

If the Pharma-controlled FDA rubber-stamps authorization to jab kids, grievously harming them could begin before end of October — what nothing remotely justifies, nor for anyone else.

A pro-Pharma/pro-toxic mass-jabbing NYC doctor was quoted, saying — with tongue in cheek no doubt:

"We've been waiting for these kids to be protected (sic)."

Keeping them — and everyone else  — safe requires rejection of toxic jabs with mass-extermination in mind.

The Times and other MSM are guilty of promoting unprecedented harm to maximum numbers of people.

Separately on CNN's State of the Union fake news Sunday program, fraudster Fauci showed up again to continue promoting genocide on an unprecedented scale by reciting his customary litany of bald-faced Big Lies.

He wants everyone jabbed, double-jabbed, booster-jabbed, and forever jabbed ad infinitum to accelerate their demise.

He wants what he personally shunned, pretending to be jabbed by faking it — yet slipping up by being caught red-handed.

Like always before, he lied claiming that data show "both safety (and) efficacy" of jabs, including for young children (sic).

He lied saying "the proper regimen for protection, optimal protection, and durability of protection would be more than just the prime and the boost followed by three to four weeks, that it might actually entail a third boost (sic)."

He knows but won't say that jabs harm heath, that multiple jabs harm most of all.

Instead, he lied claiming that jabs designed to destroy health "saved millions of lives globally (sic)" — by eliminating them straightaway or later on, he left unexplained.

He lied saying "I will certainly get a booster." He shunned jabs entirely.

In the next "couple to three weeks, (he) anticipates" FDA approval for Pfizer, Moderna and J & J boosters — so mass-extermination can proceed according to plan.

On Sunday, Fauci also lied to viewers of NBC's Meet the Press and ABC's This Week.

They and other Biden regime anti-public health officials support boosters and forever-jabbing once OK'd by the Pharma-controlled FDA.

Collins defied reality by claiming that the FDA's advisory panel "approve(d) initiation of boosters" to segments of US society is good news (sic), adding:

"It would surprise me if it does not become clear over the next few weeks that…boosters may" be OK'd for most all Americans (sic).

He repeated the "waning" immunity Big Lie, along with falsely claiming that "science" is directing Biden regime policy.

He lied about numbers of US flu/covid deaths — a figure grossly inflated by including numbers from unrelated diseases as part of continuing state-sponsored fear-mongering mass deception.

Like Fauci and other Biden regime officials, Collins "want(s) everybody to be (jabbed), and if (an unconstitutional) mandate helps with that, let's do it."

He virtually called for mass-poisoning Americans by mandating what refuseniks won't take on their own.

He's onboard with mass-elimination of unwanted Americans by killing them with as many toxic jabs needed to accomplish this diabolical goal.

He, Fauci and other Biden regime officials want others jabbed with what they won't go near for themselves.

The state of the nation is more dystopian and lawless than ever before in its history.

Because of my writing and activism — notably about all things flu/covid since last year — readers of my articles email me comments on various issues.

At times, I discussed examples of individuals harmed by flu/covid jabs that are crucial for everyone to shun.

On Sunday, an emailer explained harm caused her and family members from toxic jabs.

Her husband's 96-year-old father died six months after getting one.

She experienced "nose & rectum" bleeding from one or more jabs.

An ER exam failed to diagnose her problem.

It included blood pressure spiking to over 200 systolic and she has vascular issues.

Lifting anything heavy causes discomfort in her fingers.

She broke veins in her fingers and experiences what she called "weird feelings in (her) feet and calves."

Her main fear is that if mandated to take another jab "it will probably kill" her.

She expressed other concerns as well likely shared by millions of others in the West and elsewhere.

There's nothing remotely safe and effective about toxic Pfizer, Moderna, J & J and AstraZeneca jabs designed to harm health, not protect it as US/Western dark forces and their media press agents falsely claim.

My advice to everyone is shun them. If got any, take no more.

If jabs are mandated for any reasons, resist.

The Nuremberg Code, other international and US constitutional law support you.

No one may legally mandate anything health related otherwise.

If necessary, get legal representation to uphold your constitutional rights.

If resistance mounts enough, what's going on can be halted and defeated.

That goal should be prioritized by everyone wanting their health protected and preserved.

The same goes for all other fundamental rights.