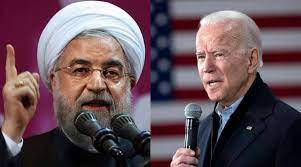 On Tuesday, they both addressed the UN General Assembly.

A separate article discussed the fake Biden's dissembling and threats against nonexistent enemies.

Iran prioritizes world peace, stability, cooperative relations with other nations, confrontation with none, and compliance with the rule of law.

It hasn't attacked another nation for centuries — what hegemon USA does time and again by hot and/or other means.

Raeisi explained that Iran is a "land of culture and civilization…of knowledge and spirituality…of perseverance and independence."

The above is polar opposite what hegemon USA is all about — notably post-state-sponsored 9/11, especially since seasonal flu was renamed covid with mass-extermination and social control tyranny in mind.

Raesi stressed that "(f)or hundreds of years, (Iran) safeguarded (the) right (of all nations) to self-determination and freedom against the hegemonists…"

Its liberating 1979 revolution freed the nation and its people from US imperial control, pillaging and exploitation of its people.

Raeisi's message to the world community is "rationality, justice and freedom."

The latter "means the right to think, decide and act for all the human beings," he stressed, adding:

"Peace and lasting security are tied to the administration of justice."

"Justice and freedom may be achieved only when the rights of all nations are fulfilled" — free from foreign meddling and control with diabolical aims in mind.

Its endless preemptive wars against invented enemies long ago proved that Washington's "hegemonic system has no credibility, whether inside or outside the country."

Its aim for global dominance inflicted more harm on more people over a longer duration than any other country in world history — defined by decades of "blood-spilling and instability" with no end of it in prospect.

Its war by other means is waged by imposing illegal sanctions on dozens of nations, including Iran for the "crime" of being free from US control.

Its agenda is tyrannical, notably its crimes against humanity at home and abroad.

On behalf of the Iranian people and others harmed by US ruthlessness on the world stage, Raeisi "condemn(ed) illegal US sanctions, especially (for) humanitarian items."

He justifiably "demand(ed) that this organized crime against humanity be recorded as a symbol and reality of" hegemon USA's ugly face, its destructive agenda, its contempt for the rule of law.

Iran is a regional leader that's dedicated to peace, stability, and legitimate use of "nuclear and satellite technologies," according to international law, said Raeisi.

US abhorrence of "rationality, justice and freedom" created crisis conditions.

Iranian policies "strive for the preservation of stability and territorial integrity of all the countries of the region" and everywhere else.

The Islamic Republic is a mortal enemy of US state-sponsored terrorism — used "as an instrument (of its) foreign policy" to further its hegemonic aims.

"You cannot make a terrorist group (like) ISIS (for use as proxy foot soldiers) and claim to" be combatting it, Raeisi explained.

Security is unattainable wherever hegemon USA shows up.

Along with its regional presence, the scourge of "Zionist…state terrorism" menaces millions.

Iran "wants nothing more" than respect for its sovereign rights and adherence to "international rules."

It wants an end to US war by other means, including its "maximum oppression."

Iran doesn't "trust" hegemon USA because time and again its promises are breached, its word never its bond, why it can never be trusted.

Raeisi believes that "(a) new era has begun" at a time when hegemon USA is in decline while other nations dedicated to peace and stability are rising in prominence.

"The Islamic Republic of Iran is ready to play its part for a better world," he stressed, adding:

"A world brim-full of rationality, justice, freedom, morality and spirituality" is possible — in stark contrast to how hegemon USA and its imperial partners operate.