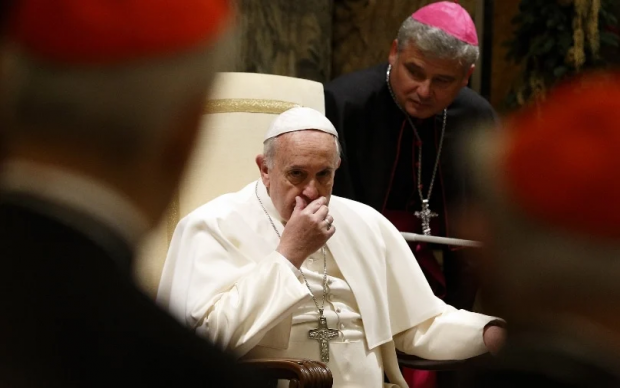 In his book, titled "God and His Demons," Michael Parenti exposed the myth of organized religion being above reproach.

The god of the Holy Bible – so much adored in the United States and elsewhere – is ferociously vindictive, neurotically jealous, intolerant, vainglorious, punitive, wrathful, sexist, racist, xenophobic, homophobic, sadistic and homicidal."

"As they say, it's all in the Bible. Beware of those who act in the name of such a god."

He and other pontiffs exercised dictatorial powers, governing as they wished, their decrees having final say.

Claiming to serve God's will, they tread where they don't belong by siding with wealth, power and privilege over equity and justice for all.

Before becoming archbishop of Buenos Aires in 1998, then a cardinal in 2001, Jorge Mario Bergoglio (Pope Francis) supported Argentina's military dictatorship (March 1976 – December 1983) – including its brutal dirty war backed by Washington.

Thousands disappeared. In detention centers, they were tortured, many eliminated.

In his earlier capacity, Pope Francis was complicit in what went on, supporting instead of denouncing it responsibly.

As pontiff, he operates in similar fashion with greater authority.

Last Christmas eve, he pushed toxic flu/covid mass-jabbing instead of forthrightly opposing what harmed countless millions over the past eight months.

Urging mass-jabbing "for all,  especially for the most vulnerable and needy of all regions of the planet (sic)," he called toxins designed to destroy health "morally acceptable."

Who better to push poison than the Bishop of Rome with over a billion followers worldwide.

Effective October 1, "(t)he Governorate of Vatican City State" decreed that entry into its territory "will only be permitted to persons who are in possession of a Vatican Green Pass…European Green Pass, or a foreign (flu/covid) green pass attesting to (having been jabbed) or recovered from (the) SARS-COV-2" virus that doesn't exist, adding:

"Entry will also be granted to those who have a negative molecular or antigenic test for the (nonexistent) SARS-COV-2 virus."

The above decree came in response to remarks by Pope Francis on September 7.

Policy now decreed is necessary to ensure "the health and well-being of the working community (sic) while respecting the dignity, rights and fundamental freedoms of each of its members (sic)."

Francis called for "adopt(ing) every suitable measure to prevent, control and counteract the health emergency" that doesn't exist.

The decree is signed by Cardinal Giuseppe Bertello, president of the Pontifical Commission for the Vatican City State and its Governorate.

Its provisions apply the Vatican City State's citizens, residents, staff, and other workers.

No exemptions are permitted except for limited numbers of individuals participating in "liturgical celebrations for the time strictly necessary for the performance of the rite."

They'll be required to wear masks, maintain social distancing, and not enter areas outside of worshipping space.

Health passports where mandated have nothing to do with protecting what's too precious to lose.

They have everything to do with draconian social control with tyrannical rule in mind.

If protecting public health was prioritized in the West, the Vatican City State and elsewhere, all things flu/covid never would have been mandated or urged — especially no mass-jabbing with health destroying toxins.

"Verification of compliance with new (Vatican) norms will be carried out by the Service for the Health and Safety of Workers in the workplaces of the Directorate of Health and Hygiene," Vatican News reported.

Left unexplained is that the new policy has nothing to do with its stated purpose.

It has everything to do with Vatican dark forces going along with draconian US/Western policies that are all about destroying public health and fundamental freedoms.

According to an unnamed Vatican City civil servant critic:

"I look to the church to take care of its flock."

"To see this happening in the Vatican is both uncharitable and scientifically ignorant."

"As many scientific studies have shown, (jabbing) does not render one immune or unable to transmit the virus."

It "increases the potential for carrying a higher virus load."

"I will never take an abortion tainted vaccine."

Last February, a Holy See decree called for "appropriate measures aimed at preventing, tracking, and dealing with unique situations of a public health emergency" that didn't exist then or now.

The decree covered "instruments required for an adequate and proportional response to the (nonexistent) health risk" — notably mass-jabbing with health destroying toxins.

It virtually mandated "measures…deemed necessary (sic)" for public interactions and what it called risks to the safety of residents and staff, saying:

"Voluntary adherence to a (jabbing) program must, therefore, take into account the risk that any refusal by a person concerned may pose a risk to him or herself, to others, and to the working environment."

On the phony pretext of "protecting the community (from) those who refuse (jabs) in the absence of health reasons…(draconian) measures (will be adopted that have nothing to do with) minimiz(ing) danger(s)" that don't exist.

Article 6 of the Vatican's 2009  Rules for the Protection of Human Dignity and Fundamental Rights (sic) stipulates the following:

"(R)efusal to undergo preventive or periodic (medical) examinations… entail(s) consequences for employees of various degrees that can go as far as interruption of the employment relationship."

"For job holders, this is equivalent to renouncing the employment relationship."

Will Vatican City State refuseniks be isolated from others?

Will those with jobs be fired, fined, or otherwise punished?

Will its residents and staff rebel?

"Will they resist what no one should tolerate anywhere?

Businesses Face $700,000 Fine For Not Forcing Shots On Employees

The 'Plandemic' and the Great Awakening

It's Time For All Good Men to Stop Fearing John Galt