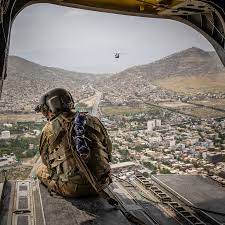 Both wings of the US war party are at war by hot and/or other means against all nations free from their control.

Despite withdrawing combat troops from Afghanistan, Biden regime war on the country continues by hot and other means.

"Without speaking to specific rules of engagement surrounding air strikes, there is currently no requirement to clear airspace with the Taliban (sic), and we do not expect that any future over-the-horizon counterterrorism strikes would hinge on such a clearance (sic)."

The Biden regime illegally retains the right to use Afghanistan airspace to continue endless war on the country — on the phony pretext of combatting terrorism US ruling authorities, the Pentagon and CIA support, their own creation to use as proxy troops.

According to USCENTCOM, when it extrajudicially "authorizes (air) strikes…in Afghanistan, (it) won't be negotiating with the Taliban about where and when (it) can drop bombs (sic)."

The Biden regime illegally considers the country "a free space"for US forces to operate in without seeking permission of its ruling authorities — a flagrant UN Charter breach.

In late August, Biden's impersonator defiantly said that the US regime "will defend (its) interests (sic) with every measure" at its disposal — meaning US aggression against invented enemies continues unchanged, including against Afghanistan.

The Biden regime will "hold the Taliban accountable to their commitment to prevent terrorist groups from using Afghanistan as a base for external operations that threaten other countries (sic)."

Jihadists in Afghanistan, the Middle East and elsewhere were made in and supported by hegemon USA.

Taliban authorities are their mortal enemy, yet surely will be falsely blamed for US-orchestrated attacks they launch in the country or cross-border.

Ignoring nearly 20 years of US aggression, occupation, rape and destruction of Afghanistan — its responsibility for millions of civilian deaths by war, related violence, torture, starvation and other abuses — Price defied reality by his colossal Big Lie, claiming:

The US is a "fierce advocate for the human rights of all Afghan people (sic), of all the people of Afghanistan (sic), and that includes women, children, members of minority groups (sic) it doesn't give a hoot about at home or abroad anywhere.

Like earlier, he ignored that Afghan funds held at the New York Fed, totaling over $9 billion, were frozen to deny Taliban authorities access to the nation's money.

Nor did he explain that Biden regime hardliners ordered the IMF and World Bank to deny financial aid to the country.

Illegal US sanctions on Afghanistan — that adversely affect its people — remain in place with no prospect of easing them, more likely to be ordered.

The Biden regime's "commitment to the Afghan people" is all about immiserating them and Taliban authorities into submission to a higher power in Washington.

Days earlier, former political prisoner Hajimumin Hamza recounted torture and abuse he endured by his US Bagram prison captors from 2017 to when Taliban forces regained control of the country, saying:

"They used to tie us to (a) chair, our hands and feet, and then applied electric shocks…sometimes beatings, too."

He and other prisoners also endured hanging upside down for hours, along with being isolated in tiny windowless cells in the dark or under a bright light kept on round-the-clock.

Another political prison named Sultan, his surname unrevealed, said during imprisonment at Bagram from 2014 to last month, he lost his teeth from torture, euphemistically called enhanced interrogation.

A plaque affixed to a Bagram prison wall mocked what occurred secretly inside for years, stating:

"Violence to life and person, in particular murder of all kinds, mutilation, cruel treatment and torture."

Yet thousands of US political prisoners at Bagram, Guantanamo and numerous other Pentagon/CIA black sites were brutally tortured and otherwise abused.

According to the UK-based Reprieve human rights group, thousands of US political prisoners — held under appalling conditions — endured virtually every imaginable form of brutal mistreatment.

Shaker Aamer was one of countless others.

Unjustly abducted, hooded, shackled and taken to Guantanamo on the same day his youngest child was born, it happened when he was doing volunteer charity work in Afghanistan.

Brutally beaten and isolated, Reprieve lawyers said when released years later in 2015, he was "unrecognizable" from his healthy pre-abduction state.

Many thousands of others endured similar brutality.

Thousands remain US political prisoners at home and abroad.

US torture prisons remain operating at home and abroad, crimes against humanity ongoing secretly out of public view or reported by MSM.

US war on humanity continues with no end of it in prospect.

All of the above and much more reflect what the scourge of US imperial ruthlessness is all about.

"Our deeds will show that we are not like the Americans who say that they stand for human rights but committed terrible crimes."

"There will be no more torture and no more hunger."

We have a constitution but we will introduce changes to it and, based on those changes, we will revise the civil and criminal codes and the rules for civilians."

"There will be much less prisoners because we will follow the rules of Islam, humane rules."

"We will bring peace and stability."

Endless US war on the country will make the latter aims hard to achieve.