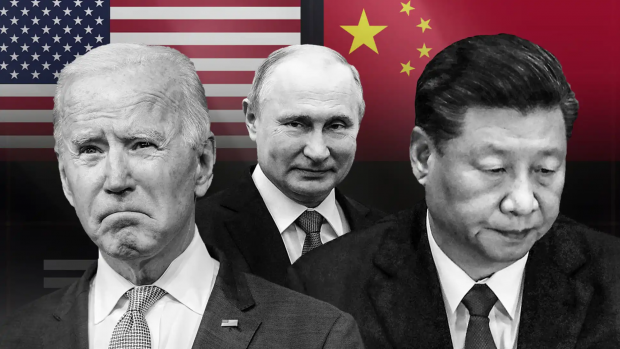 Since usurping power by brazen election fraud — a de facto coup d'etat — the Biden regime escalated war on Russia and China by other means.

An undemocratic Dem amendment to the House passed FY 2022 National Defense Authorization Act (NDAA) was the latest shoe to drop.

It prohibits US citizens from buying or selling newly issued Russian sovereign debt on primary and secondary markets.

Dems unjustifiably justified the hostile act by falsely accusing Russia of interfering in US elections.

No evidence suggests Russian interference in any foreign elections because it doesn't exist.

In compliance with international law, the Kremlin respects the sovereignty of other nations, including their election process.

Prioritizing peace, stability, cooperative relations with other nations and adherence to rule of law principles is polar opposite how hegemon USA and its imperial partners operate.

A statement by undemocratic Dem Rep. Brad Sherman — a co-sponsor of the unacceptable amendment — bragged about what no government respecting the rule of law would tolerate, saying:

He and undemocratic Dem Rep. Waters "push(ed) for tougher sanctions on Russia for its interference in our elections (sic)" — that never happened, as they and other congressional members know.

The hostile action by him, Waters and other congressional Russophobes virtually assures more of the same ahead — in flagrant breach of international law and bilateral relations that remain implacably hostile.

Like many times before, Sherman lied claiming that Vladimir Putin aims "undermine (nonexistent US) democracy and divide our country (sic)."

If enacted into US law — what's virtually certain ahead — the ban will cover secondary market trading of bonds in any currency issued by Russia's Central Bank, National Welfare Fund, or Federal Treasury with maturities of more than 14 days.

The House adopted NDAA amendment calls on the US director of national intelligence (DNI) to monitor and report on interference by Russia or other nations in US elections — that never occurred.

No evidence exists to suggest any foreign interference ever in US elections —what hegemon USA has done scores of times worldwide throughout the post-WW II period and earlier.

Notably, the US Chamber of Commerce opposed the House adopted amendment, saying the following:

It'll "have an insignificant effect on (Russia's) ability to secure funds in global markets — given (its) strong foreign-exchange and gold reserves."

But it'll "severely" harm operations of US companies that operate in Russia.

The hostile action also "violates the provisions of the UN Charter and acts contrary to generally accepted norms of international law."

They're strongly opposed "by a growing number of (world community) countries."

"US hegemonic and bullying practices are rejected by Russia and China and will meet rejection and opposition from more and more countries."

According to Bloomberg News, "Russian investors shrugged off US House backing for a provision that could extend bond-trading curbs to the secondary market."

UK-based Aberdeen Asset Management's Viktor Szabo noted that "markets are so used to this sanctions news."

"It's not the first proposal and not the last." So traders largely ignored the news.

A House approved measure also authorized sanctions on entities and individuals involved in the planning, construction, and operation of Russia's Nord Stream 2 gas pipeline to Germany and other European markets.

Biden regime and US congressional war on Russia by other means is virtually certain to escalate further ahead.

The same applies to continued US hostile actions toward other countries free from its hegemonic control.

NDAA Amendment for More US Sanctions on Russia's Nord Stream 2