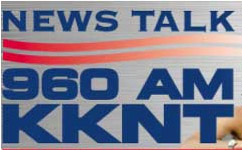 EVENT FLIER
For Immediate Release
Contact:
Rachel Van Hofwegen
Director of Marketing and Promotions
Intelligent Conservative Talk 960 AM KKNT
2425 E. Camelback Rd. Ste. 570
Phoenix, AZ 85016
Phone: (602) 955-6900 ext. 205
http://www.kknt960.com
rachelv@kknt960.com
Arizona State Treasurer Dean Martin to Host Townhall Forum - April 8th 2008
Phoenix, AZ – Intelligent Conservative Talk 960 AM KKNT is proud to announce Dean Martin, Arizona State Treasurer, as moderator for the upcoming Townhall Forum which will feature three of the nation’s top talk radio hosts, Dennis Prager, Michael Medved and Hugh Hewitt.
Martin will be probing the minds of Prager, Medved and Hewitt, all hosts of daily radio shows on KKNT 960 AM, about the 2008 election, US Political State and more.  The evening event will begin at 7 pm at the Maricopa County Events Center, formerly the Sundome, in Sun City West.  Together, these great political minds will delve into the tough questions and concerns that plague the minds of Americans today.
State Treasurer Dean Martin is the Chief Financial Officer for Arizona, third in succession to the Governor, overseeing $13 billion in assets under management.  He has opened government finances to the public on his website AzTreasury.gov.   Last fiscal year, Treasurer Martin made taxpayers over $730 million and increased investment earnings by 24% over the previous administration.  Dean Martin has been recognized
nationally as "Hero of the Taxpayer."  As Senator, Martin sponsored the largest income tax relief and property tax cuts in Arizona history, and repealed both Arizona's Marriage Tax Penalty and Death Taxes.
Ticket prices are $22.50, $29.50 and $59.50 and are currently on sale at KKNT960.com, the Maricopa County Events Center Box Office and all Ticketmaster outlets. To charge by phone, call 480.784.4444 (Phoenix Metro Area) or 520.321.1000 (Outside Phoenix Area).  All dates, acts, and ticket prices are subject to change without notice. All tickets are subject to applicable taxes, and service and handling charges.
____________________________________

Dennis Prager is one of America's most respected radio talk show hosts. He has been broadcasting on radio in Los Angeles since 1982. His popular show became nationally syndicated in 1999 and airs live, Monday through Friday, 9:00 AM to Noon (Pacific Time) from his home station, KRLA. Widely sought after by television shows for his opinions, he's appeared on Larry King Live, Hardball, Hannity & Colmes, CBS Evening News, The Today Show and many others.
Michael Medved is a nationally syndicated radio talk show host, best-selling author and veteran film critic. His daily three-hour program, emphasizing the intersection of politics and pop culture, reaches more than 2 million listeners in over 180 markets, coast to coast. For seven consecutive years, he's been listed by Talkers Magazine as one of their "Heavy Hundred" most important American talk show hosts, and for four of those years his show has also been listed as one of the ratings top ten.
Hugh Hewitt is the host of a daily nationally-syndicated talk radio show heard in more than 100 cities across the county. He is a Professor of Law at Chapman University Law School, the Executive Editor of Townhall.com, and one of the country's most widely read bloggers at HughHewitt.com. Hewitt is the author of eight previous books, including the New York Times' bestseller "If Its Not Close, They Can't Cheat" and "Blog: Understanding The Information Reformation That Is Changing Your World," and the recipient of three Emmys during his decade as an anchor of a nightly news and public affairs show for the Los Angeles PBS affiliate, KCET. He served six years in the Reagan Administration in a variety of posts including in the White House Counsel's office. He is a graduate of Harvard College and the University of Michigan Law School.
____________________________________
For more information, contact Rachel Van Hofwegen, Director of marketing and Promotions of NewTalk 960 KKNT, at (602) 955-9600 ext.205 or email rachelv@kknt960.com.