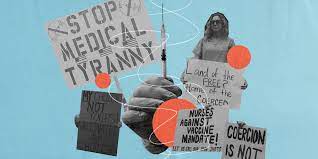 In the aftermath of giving seasonal flu a scary new name with destruction of health and remaining freedoms in mind, doctors, nurses, scientists, and activists against their diabolical scheme are on the right side of history against what no one should tolerate.

Longtime UK-based physician, author of over 100 health-related books Vernon Coleman MD explained that truth-telling doctors on all things flu/covid — especially about toxic jabs — "ha(ve) been repeatedly lied about and libeled on the internet and in the mainstream media."

Time and again, he stressed that the "threat of (flu/covid is) wildly exaggerated and (there's) no pandemic" among the unjabbed.

Because of his prominence, truth-telling on the most crucial issue of all-time, and commitment to practicing medicine as it should be before retiring, he "lost count of the number of" times he's been demeaned and libeled.

Nephrologist Richard Amerling MD is cut out of the same mold.

In his article, titled "Covid-19 Response and the Tyranny of Evidence-Based Medicine," he asked:

"Why are the vast majority of practicing physicians doing absolutely nothing to help patients with early" stage flu/covid — when safe and effective protocols exist to treat and cure it?

Slamming health-destroying protocols by Western regimes and complicit WHO, he said:

Their "guidelines are consistently wrong."

"(T)he WHO receives more than 50 percent of its funding from industry."

So do the Centers for Disease Control and Prevention (CDC)…the Food and Drug Administration (FDA)," and other US/Western public health agencies.

They're allied with Pharma over what medicine is supposed to be.

On who to trust at a time of universal deceit, Amerling said doctors who treat patients according to "science, logic, deductive reasoning, judgment, and clinical experience," adding:

"Most doctors have become so dependent on (health-destroying) guidelines that they have lost the ability to problem-solve, to think critically, and to practice real clinical medicine."

"Medicine has gone off the rails, and patients are suffering the consequences."

"These physicians achieved remarkable clinical results, but instead of being embraced and emulated, they were censored and harassed."

"As should now be obvious to even the most naïve, Pharma and other stakeholders…suppress(ed) successful, cheap remedies to pave the way for the rollout of" toxic jabs now widely used with disastrous results when taken as directed.

The diabolical scheme was advanced by what Amerling calls "the tyranny of Evidence-Based Medicine (EBM)" — demeaning what works with MSM help while promoting what's harmful.

"It is displacing the doctor-patient unit as the ultimate decision-making authority."

"Peer review is used as censorship."

"EBM is a self-referential closed system, where critical appraisal means checking whether a study conforms to its rules."

"EBM repackages and uses concepts from legal proof, in an attempt to impose a medical dictatorship."

It was "highjacked" by Pharma and other industry firms that prioritize profit-making over medicine as it should be practiced to serve needs of patients above all else.

So-called evidence can be manipulated to serve profit-making interests over truth, the whole truth, and nothing diverging from it.

" 'Evidence' is not science," Amerling stressed.

"Evidence can always be (manipulated) to support any hypothesis, no matter how absurd."

"If hundreds of thousands of patients die unnecessarily, their doctors will not be held responsible."

Longtime practicing nephrologist for over 30 years, Amerling earlier served as president of the Association of American Physicians and Surgeons (AAPS).

Well-known nationally and internationally, his work has been published in textbooks and peer-reviewed medical journals.

On the right side of history for medicine as practiced by my family's physician and favorite uncle when growing up long ago, it's at a time when challenging the fabricated official narrative is a hazardous undertaking.

Amerling is currently Associate Medical Director of America's Frontline Doctors for medicine as it should be practiced.

It's at a time when most doctors and hospitals are going the other way on all things flu/covid, harming patients instead of helping them by doing no harm.