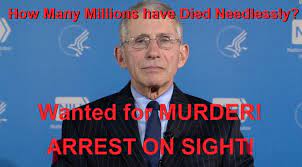 Whatever scant credibility National Geographic (NG) may have once had was lost by its fake news "documentary" attempt to transform an arch-criminal menace into a superhero, a patron saint of science he long ago abandoned in favor of Pharma profiteering, his own self-interest, and mockery of what public health should be all about.

There's nothing remotely truth-telling about the film, titled "Fauci."

Airing on the pro-toxic mass-jabbing Disney channel, the diabolical measure of the man is suppressed.

Ignoring his Big Lies and mass deception, his support for depopulation on an unparalleled scale and social control tyranny, NG falsely called him "a world-renowned infectious disease specialist (sic) and longest-serving (US) public health leader (sic)."

Along with attempting to reinvent a public health monster — a figure involved in going all-out to destroy it  — what Robert F. Kennedy, Jr. called "The Real Anthony Fauci" in his book by this title is worlds apart from NG's misportrayal of reality.

Kennedy earlier called him "a mix between (con man) Bernie Madoff, (extrajudicial defender of powerful interests at the expense of law and order) J. Edgar Hoover," a mafia crime boss, and modern-day angel of death Josep Mengele — he benefitted hugely by fronting for unparalleled pure evil.

Hostile to public health, medicine as it should be practiced, and the rule of law, he pretends otherwise with MSM propaganda support.

In his truth-telling book, Kennedy set the record straight, saying:

He works in cahoots with "long-term partner, billionaire Bill Gates, to corral Americans toward a single vaccine solution to (covid)…"

He "committed zero dollars to studying or promoting early treatment with various drug combinations that could dramatically reduce deaths and hospitalizations."

He, Gates, and their co-conspirators "worked together to finance and promote the very gain-of-function experiments in Wuhan that may have (been the origin of) the (covid) pathogen."

"Silicon Valley and media allies dutifully censored criticism of his policies on mainstream social media and collaborated to muzzle any medical information about therapies and treatments that might end the pandemic and compete with vaccines."

Fauci, Gates et al and their press agent media push what harms health and well-being over what preserves and protects what's too precious to lose.

Last year, Kennedy explained that "Fauci's tactics are an open secret" in Washington.

"Intimidation. Bullying…reckless disregard for the health and safety of the American people," and profiteering from collaboration with Pharma to rush approval of hazardous to health drugs.

Last year, Kennedy called eminent virologist Judy Mikovits MD "one of the most skilled scientists of her generation…in the field of human retro virology," adding:

Her "standards of ethics and moral courage are unparalleled."

For diabolical self-serving reasons, Fauci earlier threatened to fire her when employed at the National Cancer Institute.

Along with self-serving profiteering in mind, he delayed "development of testing (related to research by Mikovits that isolated HIV from blood and saliva and let) the HIV epidemic (spread) through the world, killing millions."

"Driven by greed and cronyism," modern-day angel of death Fauci was "directly responsible for the further spread of HIV throughout the world."

Rather than being punished for his diabolical actions, he was appointed NIAID director in November 1984, a position he still holds, along with disserving the public as chief Biden regime medical fraudster.

Mikovits explained that he notoriously advances his own interests at the expense of what public health should be all about.

When she refused to be silent about vital information he wanted suppressed from public view, he ordered confiscation of her "computers and notebooks," along with "retraction of (a) Science paper" she was involved in preparing.

He "removed (her) funding and prevented (her) from getting a job in government research" since 2012.

He abused and misused the power of his office to serve his own diabolical interests.

Before his involvement in giving seasonal flu a scary new name with mass-extermination in mind, he was also involved in permitting use of vaccines contaminated with enotropic murine leukemia virus (XMRV) administered to millions of Americans.

Based on Big Lies and mass deception, countless millions of people have been harmed in the US/West and elsewhere by what's crucial to shun for health and well-being to be preserved and protected.

Lauding a monster, the pro-toxic mass-jabbing NYT defied reality by claiming that "if anyone ever deserved to be described (as a) public servant (devoted to) public service…it's Anthony Fauci (sic)," adding:

"He's perfectly sincere (sic), perfectly patient (sic), a professional standing resolutely outside so many of the worst currents of American life (sic)."

"More than that, he has been essential (sic)."

"We owe him an immeasurable debt of gratitude (sic)."

Discussing NG's fake news film, the NYT called him "Fauci the movie star (sic)," falsely adding that the portrayal is "straightforward and no nonsense (sic)."

Ignored was that the gushing misportrayal of the man bears no relation to the monster he's been throughout nearly four decades of public health disservice.

The true measure of the man is suppressed in favor of reinventing him on the silver screen.