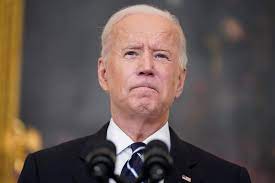 "(T)he Department of Labor is developing an emergency rule to require all employers with 100 or more employees, that together employ over 80 million workers, to ensure their workforces are fully (jabbed with health-destroying toxins) or show a negative test at least once a week" — that if positive is virtually always false.

No federal law or executive order mandates the above, no OSHA regulations.

Nor is there a statutory requirement for all federal employees to be jabbed or regularly tested — nor for healthcare facilities that receive Medicare and/or Medicaid payments to destroy the health of staff by mass-jabbing.

Anything that conflicts with international and constitutional law can legally be shunned.

There's nothing remotely legal about what the fake Biden announced last month.

Besides no federal legislation that mandates the above, nothing was sent by the fake Biden or his minions for rubber-stamping by the White House Office of Information and Regulatory Affairs, nothing officially requested of Congress.

No legal challenges followed so far because there's nothing official to challenge.

Yet before and following the fake Biden's remarks, growing numbers of large and medium-sized US companies ordered their workers and other staff to be toxic-jabbed as a condition of employment.

According to InfoWars on Tuesday, growing numbers of US airline pilots refuse to self-inflict harm from jabs designed to destroy health, not protect it as falsely claimed.

Americans are being "coerced," including commercial airline pilots.

"I believe in freedom, and I'm here to support the freedom of my fellow employees and all people across this country."

"(T)he transportation sector is the heart and soul of this country and it's a very delicate system."

"If you have flights reduced by 30% because 30% of pilots are fired because they won't take the vaccine, this is going to affect how your goods get here from overseas, how they're distributed to the stores."

"(T)he same thing is happening with the truckers, it's happening in the shipping industry."

"Those Amazon boxes that typically show up in two days, you might be looking at three weeks."

"If these companies fire us and they fire 30% of the workforce (for refusing jabs), aircraft are going to stop moving and it's going to affect you."

The "fault (lies) squarely" with the White House.

It's because of lack of enough pilots and other staff to man them over refusal to be jabbed.

Much the same thing is affecting other US airlines, so far in smaller numbers than at Southwest.

It's happening in other companies. According to the Labor Department, US retail workers are quitting.

Numbers of job openings far exceed Americans willing to take them because of poverty wages, few or no benefits and mandated jabs millions don't want.

If resistance against what no one should tolerate continues to grow throughout sectors of the US economy, Biden's head-fake mandate can be defeated.

It won't happen soon or easily. Sustained pressure by growing numbers of refuseniks is needed.

Pro-mandatory toxic mass-jabbing Dems in control of the White House and Congress represent a major obstacle to overcome.

With the fate of public health and  what remains of fundamental freedoms at stake, mass resistance against what's going on is the only option — including by civil disobedience if that's what it takes.