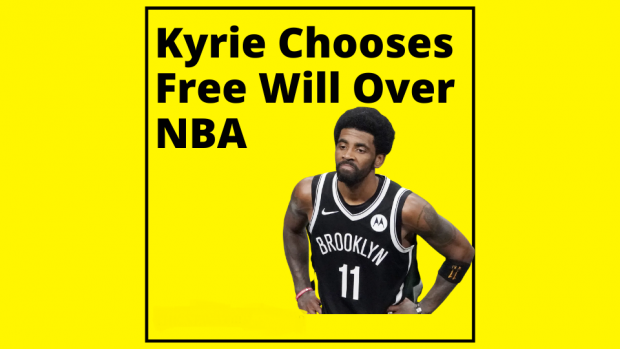 Seven-time all-star Irving prioritizes protection of his health and other issues of concern over multi-millions of dollars paid him annually to play NBA basketball.

Whether or not understanding the hazards of flu/covid jabs, he went public on Instagram Wednesday to explain why he shuns them. See below.

"Given the evolving nature of the situation and after thorough deliberation, we have decided Kyrie Irving will not play or practice with the team until he is eligible to be a full participant," adding:

"Kyrie has made a personal choice, and we respect his individual right to choose."

"Currently the choice restricts his ability to be a full-time member of the team, and we will not permit any member of our team to participate with part-time availability."

Under draconian New York City policy, proof of having taken toxic flu/covid jabs is required for access to most public places, including restaurants, theaters, gyms, Brooklyn's Barclay Center arena where the Nets play basketball and Madison Square Garden, home of the NY Knicks.

According to NYC health and freedom-destroying rules no one should tolerate, players, coaches and other staff of the Nets and Knicks are prohibited from entering home arenas for games when played unless jabbed.

The same goes for fans and others seeking entry.

The Athletic's Shams Charnia said Irving's refusal to be jabbed is because he "wants to be a voice for…voiceless" others shunning them, adding:

He's angered over countless thousands of people losing jobs over this issue that include people of color like himself.

"To him, this is about a grander fight than the one on the court, and (he's) challenging a perceived control of society and people's livelihood, according to sources with knowledge of (his) mindset."

"It is a decision that he believes he is capable to make given his current life dynamics."

Having earned tens of millions of dollars over the past decade, money is secondary to other priorities.

Breaking his silence on Wednesday, Irving said the following on Instagram:

"This is about my life and what I am choosing to do," adding:

"The financial consequences, I know I do not want to even do that."

"I chose to be un(jabbed), and that was my choice, and I would ask you all to just respect that choice."

"It's about choosing what's best for you."

"You think I really want to lose money?"

"You think I really want to give up on my dream to go after a championship?"

"You think I really just want to give up my job?"

"This is my life. I get to do whatever I want with this. This is one body that I get here."

"And you are telling me what to do with my body."

"This has everything to do with what is going on in our world."

"And I am being grouped into something that is bigger than just the game of basketball."

"Nobody is hijacking this voice."

"I am not retiring…I am not going and leaving this game like this. There is still so much more work to do."

Though not explicitly citing concern about protecting health as a reason for shunning jabs, his remarks suggested it, along with other issues of importance to him — including freedom of all things related to his body and life.

What's best for him goes for everyone wanting their health protected and preserved, along with the freedom to choose on all things related to the inviolability of our bodies and well-being.

No one may legally order anything affecting them — for good or ill — without our voluntary consent.

Irving may or may not know the law. Knowing what's best for him demands respect.

The same goes for everyone — notably at a time when diabolical US/Western dark forces are waging war with mass-extermination and social control tyranny in mind.

All-out resistance against what's going on is the only viable option.