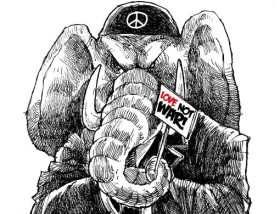 In case you haven't had a chance to read today's newspapers, we received a copy of State Senator Joe Pennacchio's 94-page fascist manifesto over the weekend and released a copy of it on my website www.MurraySabrin.com. If you don't have the time to read the entire document, below are some the excerpts from the book titled, "The Nationalist Agenda: A blueprint for the 21st Century":

Joe Pennacchio on democracy: "How do we start? Our first Step should be getting rid of our constant need for elections."

Joe Pennacchio on putting Americans into camps: "Taking these people and separating them into various military camps would be a first step on the mainstreaming of our homeless back into society...A considerable amount of the homeless are alcoholics and drug-dependent. These homeless should be separated from the unemployed homeless in a different type of military camp."

Joe Pennacchio on the Internal Revenue Service: "The IRS only collects 81% of its taxes due... The IRS can only accomplish this if it has the additional man power. Any additional funding for the IRS would be well worth it."

Joe Pennacchio continues on the Internal Revenue Service getting involved in private debt collection: "The Nationalist Part proposes that businesses be allowed to gift court-awarded judgments to the Internal Revenue Service for collections. If the IRS manages to collect these deadbeat funds, then the companies would be able to have 10% tax deduction."

Joe Pennacchio on Israel providing reparations to the Palestinians: "Reparations - the United States, Israel and other concerned nations agree to provide Jordan and its newly assimilated Palestinian population with long term economic aid."

Joe Pennacchio on nationalized health care: "The Nationalists Party endorses the formation of a new form of medical system. This will be called, 'The National Health Organization.' ... to date, the biggest resistance to 'socialized' medicine has been from the medical establishment. We must, therefore, find a way of encouraging doctors to become participating members."

Joe Pennacchio on Ronald Reagan and George H.W. Bush: "Republicans offer 'trickle-down' and 'voo-doo' economics. Republicans have failed to offer fresh ideas. The United States should abandon costly and doubtful programs such as Star Wars and a new generation of land-based missiles."

Joe Pennacchio on senior citizens: "Our elderly must join the entire community of citizens to help lay a sound cornerstone of financial responsibility."

Joe Pennacchio on the 2nd Amendment: "The Nationalist Party favors...registration and ballistic testing of all weapons sold."

There are many more passages including encouraging girls to take the abortion pill - RU486, creating national education requirements, and creating an Equal Rights Amendment to "prevent women from taking on jobs of which they are not physically able."

I have called on Senator Pennacchio to not only remove himself from the United States Senate campaign but to step down from his current office.


Pennacchio Falls On His 'Penn' Pennacchio's Supporters Are Running For Cover!

Trenton, NJ - New Jersey conservative Republican leader Dr. Murray Sabrin, the Garden State's strongest advocate of limited government and individual freedom and candidate for United States Senate, called on State Senator Joseph Pennacchio to resign from his State Senate seat and to abandon his campaign for the U.S. Senate at a press conference yesterday after releasing copies of Joe Pennacchio's 94-page manifesto titled, "The Nationalist Agenda: A blueprint for the 21st Century" as seen here: http://www.sabrinforsenate.com/xDocs/2008-03-17_NationalistAgenda.pdf.

Dr. Sabrin released a copy of a letter sent to 50,000 Republican leaders, activists and donors across New Jersey and around the country today.

Murray Sabrin is a retired successful entrepreneur working in commercial real estate, portfolio management, and economic research. Murray is an author, TV and radio commentator, and Professor and Executive Director of the Center for Business and Public Policy at Ramapo College. He and his wife Florence of 39 years reside in Bergen County. For more information, please visit www.murraysabrin.com.