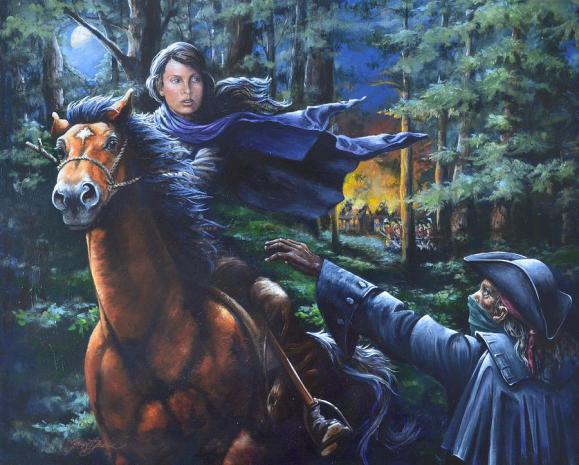 I’m 71 years old and have never heard her name.

I found this article and wanted to share (it was from May 2021):

I'm 71 years old and have never heard her name. ALL the history I took in school and all the women's movement stuff...never knew about this child. Well, I do now and I won't forget it. How important her charge was and how courageous she must've been.... Love this story!

This month in U.S. history, we remember that famous ride that would warn the colonies that the British were coming.

The Colonel needed someone he could trust, someone brave enough, someone who could ride a long distance, through the darkness, from 9 p.m. to dawn, someone who could fight off enemy combatants, to alert the Colonial militia to the approach of British forces.

So, the Colonel chose the "best man for the job."

This month, on April 26, 1777, her father asked his young daughter to take the dangerous ride.

On the night of April 18, 1775. Revere made his famous ride and history remembers him well, because of the famous poem by Henry Wadsworth Longfellow, who would tell the tale, saying:

"Listen my children and you shall hear

But, many people do not know about the four other riders, who warned their communities of the approach and movement of the British forces.

The five heroes (including Paul Revere) were Samuel Prescott, Israel Bissell, William Dawes, and, the one who I am dedicating this post to, Sybil Ludington, who at that time was only 16 years old.

On the night of April 26, 1777, Colonel Henry Ludington chose his daughter to take that famous ride in history.

Sybil set out at 9 p.m. that night in the rain to warn the colonists at Danbury, Connecticut of the approach of the British. She would make a journey double to that of Revere (totaling 40 miles), riding through Kent to Farmers Mills and then returning back home again.

During her famous ride, she gathered her father's troops, knocked on doors and warned the countryside of the British troops' incoming attack - and, she fought off a highwayman with a long stick.

By dawn, she was exhausted, damp from the rain, but had accomplished her mission warning the colonists and bringing together 400 soldiers ready to march and drive the enemy troops from the area.

She would later be commended by George Washington for her heroism. Each April since 1979, the Sybil Ludington 50-kilometer footrace has been held in Carmel, New York. The course of this hilly road race approximates Sybil's historic ride, and finishes near the statue which was erected in her honor on the shore of Lake Gleneida, Carmel, New York.

So, when you hear the tale of Paul Revere this month, remember about the other riders, one of which was the courageous Sybil Ludington.