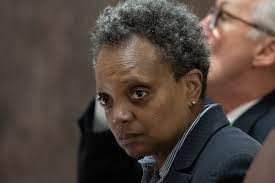 Chicago where I've lived since the late 1960s is no longer what Frank Sinatra once called "my kind of town."

It's no longer home sweet home.

Life in the city is increasingly hazardous to health — at a time when US federal, most state and local authorities are going all-out to destroy it, along with what remains of a free and open society.

Things shifted this way incrementally since US dark forces renamed seasonal flu/influenza covid last year — with the worst of diabolical aims in mind.

Left unexplained by most all levels of government and MSM co-conspirators is that the so-called SARS-CoV-2 virus doesn't exist.

What doesn't exist cannot cause any disease. The mother of all things public health related is a colossal hoax.

Since last year, we've been consistently lied to and mass deceived by federal as well as most state and local officials with diabolical aims in mind.

Chicago mayor Lori Lightfoot is complicit with waging war on public health and what remains of fundamental freedoms.

Her draconian public health related mandates are all about wanting it obliterated — replaced by medical tyranny.

They include requiring that city employees, including police, be fully-jabbed with toxins designed to achieve the above objective.

Lightfoot's Office of the Mayor website falsely claims that (toxic) flu/covid jabs are "safe and effective (sic), and are an important tool for ending the global pandemic" that's invented, not real — except for the jabbed.

She willfully and maliciously deceived the public further by saying that toxic health-destroying jabs "protect you and the people around you (by) reducing the spread of" flu/covid (sic).

They continued on a Monday press release, falsely saying the following:

"By getting (jabbed), we can preserve the safety of city employees and the health of our communities while moving Chicago closer to a safe return to normalcy (sic)," adding:

"Chicago needs to be proud of our city employees (sic), who are committed to keeping our residents safe (sic) and will continue to do a phenomenal job at submitting their (jab) card or (jab) status to our city portal."

"I am thankful to everyone who has demonstrated their civic duty thus far (sic) by keeping our workplaces and city safe (sic) and our union partners for working through many difficult conversations to make this milestone possible (sic)."

The old saying that "there's no fool like an old fool" now applies to millions who've been fooled to believe that health-destroying flu/covid jabs are beneficial.

There's nothing remotely safe and beneficial about what was designed with mass-extermination of unwanted people worldwide and social control tyranny in mind.

Lightfoot is part of the problem for allying with diabolical dark forces in Washington.

Henceforth, city workers — including police, firefighters and others involved in essential duties — who fail to comply with what no one should tolerate face unacceptable punitive actions as follows:

They'll "be placed in a non-disciplinary, no-pay status until they have come into compliance with the policy."

"Disciplinary action may also be taken against employees who fail to report their status as required by the (draconian) policy."

On Monday, thousands of city police were stripped of their law enforcement powers and sent home for reporting for duty unjabbed as mandated by October 15.

The same action was taken against other unjabbed city workers.

According to Lightfoot's office, over one-third (4,543) of police in a force-strength of 12,770 remain unjabbed and have not reported their status as required.

The true number is likely half or more of city police, the same likely true about its firefighters.

Reportedly around a third of their numbers remain unjabbed, the true total likely greater.

Other city departments include large numbers of refuseniks — though reportedly most city workers unwittingly agreed to self-inflict harm.

On Sunday by memo from police superintendent David Brown's office, cops who choose retirement over jabs "may be denied retirement credentials."

"Complying with this INVALID order and the violation of MY Bargaining, Constitutional and Civil Rights has furthermore caused me severe anxiety while challenging both my religious and moral beliefs."

"I am in fact complying with this because I am being forced to do so under complete duress and threats of termination."

"Still think this is about (flu/covid) or public health??"

"This mayor is a complete and utter joke. She is the epitome of hypocrisy."

"This is plain and simple union busting. The other city unions better wake up."

"Today it's us under attack. Tomorrow it will be you if you challenge this tyrant. We will not relent."

City mandates are "not about stopping the spread" of flu/covid.

"It's all about control."

Lightfoot is a "miserable human being" for push toxic/health-destroying jabs as a condition of city employment.

The city and FOP are battling each other judicially — things rigged for health-destroying jabs over voluntary consent on all things health related, as required under international law.

According to the Chicago Tribune on Monday:

Disciplinary actions began against "thousands of (police) officers who did not meet the Friday deadline to upload their vaccination status to a city portal."

They're "being brought in for counseling sessions where they were given direct orders to report their (jabbing) status."

"If they refuse, they are sent to human resources, where the city swiftly takes disciplinary action."

The same thing applies to all noncompliant city workers.

A police department memo obtained by the Tribune said the following:

"TO BE READ AT ALL ROLL CALLS FOR SEVEN (7) CONSECUTIVE DAYS."

"This…message informs (police) department members of consequences of disobeying a direct order to comply with the City of Chicago's (mass-jabbing)Policy issued 8 October 2021 and being the subject of the resulting disciplinary investigation."

"A department member, civilian or sworn, who disobeys a direct order by a supervisor to comply with the (mandate) will become the subject of a disciplinary investigation that could result in a penalty up to and including separation from the Chicago Police Department."

"Furthermore, sworn members who retire while under disciplinary investigations may be denied retirement credentials."

"Any questions concerning this (draconian) message may be directed to the Legal Affairs Division via e-mail."

On Wednesday, the city and FOP return to court on this most crucial of all issues.

City workers — including police, firefighters and others — face stiff headwinds ahead in their struggle for justice to protect and preserve their health that the Lightfoot regime is hell bent to destroy in cahoots with dark forces in Washington going all-out for the same diabolical aim.