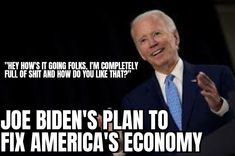 The Biden regime is hands down the most illegitimate, lawless and ruthless one in US history.

It's illegally empowered by the most brazen election theft in US history.

It's nominally headed by a selected/know-nothing impersonator — instructed to read or paraphrase lines written for him.

It's waging unparalleled war on humanity at home and abroad to eliminate unwanted billions of people.

It aims to transform the world community of nations into ruler/serf societies — subservient to their master in Washington.

It's contemptuous of the fundamental rights and welfare of most people domestically and abroad — wanting them entirely eliminated.

It's heading toward criminalizing what's mandated under international and US constitutional law when diverging from its diabolical agenda.

Like its predecessors, it's at war by hot and/or other means against all nations from US control.

Its recklessness makes the threat of global war more possible than any time since WW II ended.

The real Joe Biden is too cognitively impaired to function in any official capacity.

So he's hidden away from public view who knows where.

He's likely secreted in a cordoned off part of the White House while his wife painfully pretends that the impersonator representing him is the real JB which he's not.

Interventionist Blinken runs all things foreign policy for the regime.

His mouthpiece Price at State parrots lines scripted for him to recite and paraphrase — Big Lies and mass deception his mandate in similar fashion to his boss.

Ignoring over a decade of US aggression against Syria — launched by the Obama/Biden regime, continued by its predecessors, he demanded that President Assad observe Security Council Res. 2254 (2015) that three US regimes trashed.

Mandating ceasefire and respect for the country's political process, dominant US hardliners breached it straightaway and repeatedly since adopted.

Saying Syrians "deserve nothing less after more than a decade of war," he ignored US responsibility for the rape and destruction of the country — along with others in the Middle East, Central Asia and North Africa post-9/11 alone.

As part of longstanding US war on Russia by other means, NATO illegally withdrew accreditation of eight members of its mission to the US-dominated alliance.

Defying reality, Price falsely claimed that the hostile act "strengthened its deterrence and its defense (sic) in response to Russia's aggressive actions (sic) while, at the same time, leaving the door open for meaningful dialogue (sic)."

Fooling no one, the above rubbish includes multiple bald-faced Big Lies in the same remark.

On JCPOA talks after six failed rounds achieving nothing positive, a seventh likely upcoming, Price ignored flagrant US/E3 breaches of the landmark agreement since 2018 while demanding full compliance from Iran it never deviated from.

They're longstanding US practice at home and abroad, notably in its global torture prisons, Guantanamo the tip of the iceberg.

Venezuela operates by higher standards, in compliance with the rule of law hegemon USA long ago abandoned at home and abroad.

Since Hugo Chavez took office in 1999, US regimes waged war on the country and its people by other means to transform it back into a subservient vassal state.

Like other nations on Washington's target list for regime change, Price blamed Venezuelan ruling authorities for US crimes against humanity and other hostile actions against the Bolivarian Republic and its people.

A rant of bald-faced Big Lies followed by Price, typical of how US extremists operate against all sovereign independent countries.

On China, Price falsely accused its government of pursuing a "nuclear buildup (sic)."

Deploying WMDs, including banned weapons, worldwide is a US specially, part of its war on humanity in stark contrast to prioritizing peace and stability, how Beijing operates.

No "range of threats from the PRC exists." Price lied claiming otherwise.

On Afghanistan, he lied again, pretending US concern for its people — survivors of its two-decade war against the nation that's continuing with no prospect for resolution in sight.

Biden regime hardliners won't quit pursuing their diabolical aim to regain full control over the country, its resources and population.

Managed news misinformation and disinformation define all public remarks by Price, his boss and the imposter in the White House.

A notorious serial liar like most all Biden regime officials and congressional Dems, nothing he says can be taken at face value.