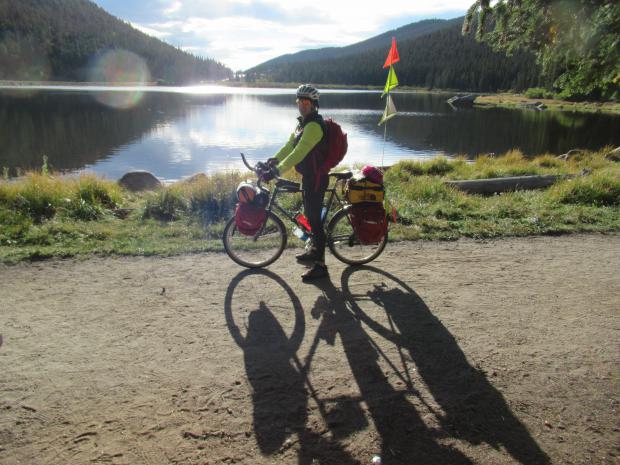 "Nothing in the world can take the place of persistence.  Talent ­will not; nothing is more common than unsuccessful people with­ talent.  Genius will not; unrewarded genius is almost a proverb. ­ Education will not; the world is full of educated derelicts.  Persistence and determination alone are omnipotent.  The slogan ­"Press on" has solved and always will solve, the problems of the ­human race."

Touring through Hobart, Indiana, one summer, I heard about a triathlon being run the next day.  I decided to enter if they­ allowed same-day registration.  The swim, bike and run event ­takes place worldwide, with a large following of people from many ­walks of life.  I had run in several dozen myself and it was a ­great way to meet people who enjoyed physical fitness.

Even while touring, I like to run and swim at every ­opportunity along the route.  I swim in rivers, lakes, pools and ­oceans.  Running is easy to do in the mornings before breaking ­camp.  Bicycling is easy for me as I crank the pedals 70 miles a­ day, which includes a handicap of 70 pounds of gear.  It would be ­fun to test my mettle in a triathlon.

The next morning, officials allowed me to register when several competitors didn't show up.  After stashing my bags and camping ­gear with a family from Indianapolis who came to race, I surveyed­ the course.  It included a mile swim, 46-mile bike ride and­ finished with a six mile run.

They set the race in age group waves.  More than 600­ triathletes lined up on the beach.  They ranged in ages from 18 ­through 71.  The oldest woman was 71 and the oldest man was 69.  ­Knowing how tough a sport it is, I was amazed at the number of­ older people lining up for the swim.

When the gun fired, the first wave of triathletes dove in ­with arms flying through the water.  When my age group came up, I­ stepped up to the line.  I felt nervous and full of expectation. ­I knew the next four plus hours were going to be tough.  I couldn't ­help myself.  I would push my body to its limits during ­the race.

In seconds, I pulled handfuls of water past my body as I­ swam toward the distant marker.  Some guys cruised past me, ­and I passed others.  I swam in the thick of it.  Rounding ­the marker 15 minutes later, I felt good as my strokes felt ­strong.  I cruised into the beach with a good time.

After changing my clothes, I jumped on my bike, and flew ­down the road.  Several people glanced at me on my mountain bike­ as if I was pretty strange compared to those sleek racers, but I­ didn't mind.  My legs made up for a lot of their equipment.  I ­kept picking them off, one by one.   For the next hour, I ­hammered on them at 24 miles per hour, sometimes faster as­ I gained surges of strength.  By the time I came into the ­transition area, I placed in the top ten of my age group.  A quick change of shoes and I rushed onto the running course.

The run proved tougher because I hadn't been training, so I­ wasn't picking anyone off, but I wasn't losing places either.  I ­ran into the chute in the top third of the racers and ninth place­ for my age group.  It felt good to have been at full ­throttle for four hours.

Everyone stood around, cheering the racers as they came in ­from the run.  Even though it was a race, everyone loved to see ­every competitor finish.  Most of us congregated around the ­fruit, bagel and drink tent.  I ate 30 pieces of cut-up orange­ slices, watermelon and grapes.  An hour later, most people finished the race-course. Race sponsors announced the awards ­ceremony would be held in fifteen minutes.

People gathered around the platform while the times and­ awards were given out.  By the time they were nearly finished, it ­was more than four hours since the start of the race.  Many­ people were walking to their cars, when the sponsor made a special ­announcement.

"Friends, you're not going to believe this, but two racers ­are still out on the course, and they're battling for second to­ last place," he said. "Right now, 69 year old John Haglan is leading 71 year old Martha Gingrich.  They're a half mile out, so ­if you would like to cheer them at the finish, let's line the race ­course."

In seconds, more than 500 people lined both sides of the­ course leading toward the finish.  With only a 100 yards to go ­after the turn off the main road, the two triathletes rounded the­ corner not five yards apart.  They were in a race for their ­lives, as it was apparent that neither wanted to be last.  John ­Haglan was limping, but still holding on to the lead—while ­Martha gained on him.  The crowd, caught up in the drama, screamed support for the two racers.

With fifty yards to go, Martha­ grabbed the lead from John.  At that point, the aging triathlete ­seemed to lose his legs, but kept fighting to sustain his stride. ­The crowd cheered wildly and gave them high fives as they raced­ down the chute.  Martha was going to win by ten yards when just ­before the finish line, she stopped, turned around, and waved to ­John to hurry up.  When he reached her, she joined hands with him ­and they both ran across the finish in a tie.  The crowd went ­wild.

There wasn't a dry eye at the race.

Two hours later, everyone was gone except the cleanup crews.  ­I loaded my bike and filled my water bottles.  That day was one­ of the greatest sports events I have ever witnessed.  Martha and ­John showed everyone at that race that youth is a matter of attitude.

Samuel Ullman wrote:  Youth is not a time of life; it is a­ state of mind; it is not a matter of rosy cheeks, red lips and­ supple knees;  it is a matter of will, a quality of imagination, ­a vigor of the emotions; it is the freshness of the deep springs­ of life.

Youth means a temperamental predominance of courage over timidity, of the appetite for adventure over the love of ease. ­This often exists in a man of 60 more than a boy of 20.  Nobody­ grows old merely by living a number of years.  We grow old by deserting our ideals.  Years may wrinkle the skin, but to give up ­enthusiasm wrinkles the soul.  Worry, fear, self-doubt bows the ­heart and turns the spirit back to dust.

Whether 60 or 16, there is in every human being's heart the ­lure of wonder, the unfailing childlike curiosity of what's next, ­and the joy of the game of living.  In the center of your heart ­and mine there is a wireless station; so long as it receives ­messages of beauty, hope, cheer and courage, you are young.

When the antennas are down, and your spirit is covered with­ the snows of cynicism and ice of pessimism, then you have grown­ old, even at 20.  But so long as your antennas are up, to catch the optimism and create enthusiasm, there is hope you may die YOUNG at 80.

John and Martha's enthusiasm generated more power and excitement than the winners of the race.  In fact, in Latin, the word 'enthusiasm' means 'en theo' which means, 'with God'.  When we look at the emerging creative energy of the Great Spirit, then it means that anyone with 'enthusiasm' is continually renewing and creating energy and moving with the energies of life.  They are, quite literally, forever young—until their very last breath on Earth.

Thank you Martha and John for your living proof of living with 'enthusiasm', because in the end, age doesn't count.