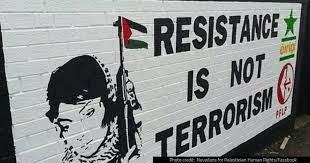 Like US-dominated NATO, apartheid Israeli falsely accuses others for its own high crimes.

State terrorism, aggression, occupation, and contempt for the rule of law define its hostile agenda.

Ones named include Addameer, Al-Haq, Defense for Children-International - Palestine, the Union of Palestinian Women's Committees, the Bisan Research and Advocacy Center, as well as the Union Of Agricultural Work Committees.

They support all things human rights as mandated by international law, what hegemon USA-dominated NATO and Israel rejected throughout their odious history.

Like former PM Netanyahu and current one Bennett, Gantz is both unindicted war criminal and serial liar.

Falsely claiming that the above human rights groups are actively "involved in terror activity" mocked and denigrated what their agenda is all about — polar opposite Israel's war on humanity.

Saying they "operat(e) under cover in the international arena" on behalf of the (activist) Popular Front for the Liberation of Palestine Israel falsely considers a terrorist organization included no evidence of a link between them and the PFLP.

Nor does any evidence exist to show that the above-named human right groups support terrorism or "armed struggle (for the) destruction of Israel."

Under Israeli law, groups labeled terrorist organizations permit its ruling regimes to close their offices, seize their assets, ban their activities, arrest their members and imprison them — for invented reasons.

"They may be able to close us down. They can seize our funding. They can arrest us."

"But they cannot stop our firm and unshakeable belief that this occupation must be held accountable for its crimes."

In response to Gantz's false about Al-Haq and other Palestinian groups named, Jabarin added:

"I challenge any of them — the (war) minister, Shin Bet, anyone — to prove" the phony accusation.

He also criticized Gantz's timing. Coming late afternoon Friday, it was ahead of the Jewish Sabbath (Shabbes or Shobos) from sundown Friday to sundown Saturday.

"When Gantz issues such an order on Friday afternoon, it means he doesn't want the world to see his actions," Jabarin explained.

"This decision is an alarming escalation that threatens to shut down the work of Palestine's most prominent civil society organizations."

"The decades-long failure of the international community to challenge grave Israeli human rights abuses and impose meaningful consequences for them has emboldened Israeli authorities to act in this brazen manner."

The HRW and AI have much to answer for about being on the wrong side of hostile US actions against nations threatening no one.

Nonetheless, their criticism of apartheid Israeli actions is welcome and needed.

"It is an act characteristic of totalitarian regimes, with the clear purpose of shutting down these organizations," adding:

The Bennett regime is trying to perpetuate a "violent apartheid regime."

"B'Tselem stands in solidarity with our Palestinian colleagues, is proud of our joint work over the years – and is steadfast to continue so."

"The international community must use all available means to hold Israeli authorities accountable for targeted attacks and repression of Palestinian civil society organizations."

Like its predecessors, the Bennett regime wants evidence of Israeli crimes or war, against humanity, and atrocities against Palestinians suppressed, along with its critics silenced.

That's what falsely designating the above human rights groups as terrorist organizations is all about.

Most often, the Jewish state gets away with the highest of high crimes because of world community indifference toward harm they cause.

Does US Direct and/or Proxy War on Russia Loom?