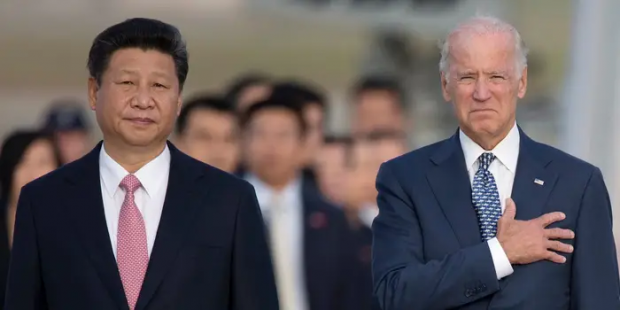 One-China has been official US policy since January 1, 1979 as agreed to by Jimmy Carter and Deng Xiaoping.

Trump renounced what stood the test of time for four decades.

So did Biden regime hardliners as part of their war on China by other means.

For the first time on Tuesday, Taiwan's president Tsai Ing-wen confirmed the presence of Pentagon forces on Taiwanese territory.

What Beijing no doubt knew crossed an unacceptable red line in Sino/US relations.

Claiming US troops are on the island for "training purposes, Tsai failed to disclose how many — nor what Pentagon armaments are present.

According to former Taiwanese official in favor of unification with the mainland Chiu Yi, Tsai is playing with fire.

The presence of Pentagon forces on the territory flagrantly breaches the one-China policy.

"(W)e encourage all UN Member States to join us in supporting Taiwan's robust, meaningful participation throughout the UN system and in the international community."

He falsely called this step "consistent with our one-China policy (sic)."

Blinken's unacceptable statement "seriously violates the one-China principle and the stipulations of the three China-US joint communiques, violates the promise it has made, violates the basic norms governing international relations, and has sent a seriously wrong signals to the 'Taiwan independence' forces," adding:

"China strongly deplores and firmly opposes this, and has made clear its solemn position to and lodged stern representations with the US."

"I want to stress the four-point basic position."

"First, there is only one China in the world."

"The government of the People's Republic of China is the sole legal government representing the whole of China."

"The Taiwan region is an inalienable part of the Chinese territory."

"A total of 180 countries, including the US, have established diplomatic relations with China on the basis of commitment to the one-China principle."

It's "a universal consensus of the international community and a widely recognized norm of international relations, which does not allow unilateral challenge or distortion by the US."

"In three China-US joint communiques, (Washington) unequivocally recognizes the government of the People's Republic of China as the sole legal government of China."

"Within this context, the people of the US will maintain cultural, commercial, and other unofficial relations with the people of Taiwan."

"Second, the Taiwan region's participation in activities of international organizations must be handled in accordance with the one-China principle."

"Resolution 2758 adopted by the UN General Assembly has solved once and for all the issue of the China's representation in the UN in political, legal and procedural terms."

"The system, agencies and the Secretariat of the UN should abide by the one-China principle and UNGA Resolution 2758 when dealing with Taiwan-related affairs."

"By touting and whitewashing of Taiwan's so-called democracy and contribution and endorsing Taiwan, the US is trying to distort concepts and mislead others."

Its "motive and intention are seen clearly by the international community."

"Fifty years ago, the US attempted to create 'one China, one Taiwan' or 'two Chinas' in the UN, only to confront setbacks."

"If the (Biden regime) backpedals in history today, it is pitting itself against the 1.4 billion Chinese people and the vast majority of countries in the world, and will only face another failure."

"This is the greatest realistic threat to peace and stability across the Taiwan Strait and the crux for the repeated frustration Taiwan has experienced in participating in activities of multilateral institutions such as the ICAO and WHO in recent years."

"(T)he Taiwan region has unfettered access to information from the ICAO."

"It is linked to many cities in the world with convenient flights."

"On the premise of observing the one-China principle, medical and health experts in the Taiwan region can attend WHO technical meetings."

"Taiwan has unfettered access to public health information including with regard to" flu/covid.

The Biden regime "is making an issue out of Taiwan's participation in the ICAO and WHO to angle for sympathy."

"This attempt is miscalculated and futile."

"China has made clear its firm rejection to them from the very beginning."

The Biden regime "has been keeping up erroneous words and acts on the Taiwan question."

"The Chinese side has made resolute and necessary reactions every step of the way."

If Biden regime hardliners "continue playing the Taiwan card,' it would inevitably pose seismic risks to China-US relations, seriously undermine peace and stability across the Taiwan Strait, and gravely harm the interests of the US itself."

There's no ambiguity about the above stern remarks.

Beijing's position on one-China is nonnegotiable.

Commenting earlier about the presence of Pentagon forces on Taiwan, Zhao said China "will take all necessary measures to protect its sovereignty and territorial integrity."

On October 7, the Wall Street Journal said a Pentagon "special-operations unit and a contingent of marines have been secretly operating in Taiwan to train military forces…for at least a year," adding:

Unnamed "US military officials (dubiously claimed) that Beijing is likely to try to use force in its designs on Taiwan within the next six years (sic)."

"Other officials have said China's timeline could be sooner than that (sic)."

Citing no corroborating evidence because none exists, the above claims reflect US anti-China bluster.

Warning that the Biden regime is "playing with fire on (the territory), it denounced its "drive for reunification and development," adding:

US "vicious acts such as selling arms to Taiwan and sending officials to the region for visits have undermined the China-US political foundation, increased uncertainties in their relations, and greatly harmed peace and stability across the Taiwan Strait."

"Beijing will never compromise on those matters regarding the country's core interests."

"The Chinese government and people have both the capacity and resolve to safeguard the country's sovereignty and territorial integrity."

"One who plays with fire will surely end up getting burned."

On Wednesday during a virtual ASEAN summit, the imposter in the White House ignored all-out US war on humanity at home and abroad with mass-extermination and establishment of unchallenged tyranny in mind.

Also ignored were its numerous wars by hot and/or other means against invented enemies.

Instead, the fake Biden falsely blamed China for "coercive" actions against Taiwan that don't exist, adding:

The regime he represents — by impersonating dementia-impaired Joe — "is committed to Taiwan."

"It continues to be the maintenance of peace and stability across the Taiwan Straits and within the region (sic)."

On all things related to peace, stability and compliance with the rule of law, hegemon US is a longstanding/unapologetic enemy.

It's the gravest threat to everyone everywhere.