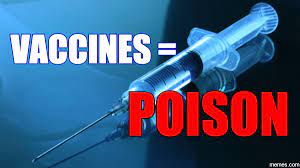 The BMJ defines its mission as follows:

"Improving the creation and dissemination of research evidence"

"Championing the health and wellbeing of doctors"

"Improving the social and environmental determinants of health"

It's "poor practices" raise serious questions about claims of safety and effectiveness.

Last year, company chairman and CEO Albert Bourla dubiously claimed to be "operating at the speed of science" to develop and produce flu/covid jabs.

Researchers involved in testing its experimental technology at several sites discovered that warp speed development "c(ame) at the cost of data integrity and patient safety."

"Staff who conducted quality control checks were overwhelmed by the volume of problems they were finding."

On the same day, Ventavia fired her."

Ventavia calls itself one of the nation's largest privately owned clinical research companies.

Documenting disturbing quality control issues, she said that "something new (is happening) every day. We know that it's significant."

"Documents show that problems had been going on for weeks," including the "falsif(ication) (of) data."

President of Citizens for Responsible Care and Research Incorporated (CIRCARE), Elizabeth Woeckner, slammed the FDA for shoddy oversight that permits falsified data and other disturbing practices to go on unaddressed.

The agency rarely does anything other than inspect paperwork, usually months after a trial ended.

It failed to inspect Ventavia after receiving Jackson's complaint.

According to an earlier HHS inspector general's report, the FDA "inspected only 1% of clinical trial sites."

After Ventavia sacked Jackson on the phony pretext of "not (being) a good fit," she told The BMJ that what happened was a first in her 20-year career.

She was sacked for blowing the whistle on unacceptable practices by Pfizer to rush development of its experimental mRNA drug for use in jabbing for protection against flu/covid that indisputable evidence shows it does not provide.

Nor does Moderna's similar drug or J & J/AstraZeneca vaccines.

The decision came after years of research failed to deliver positive results.

"(T)here can be no assurance that our LNPs will not have undesired effects."

In late October, Kaiser Health News (KHN) reported that US hospital emergency rooms (ERs) "are swamped with seriously ill patients" — mostly ones not ill from flu/covid.

What's going on is in stark contrast to 2020 when "many ERs across the country were often eerily empty" at a time of public hysteria generated by fear-mongering about flu/covid.

According to KHN, "in parts of the (US) where (flu/covid) isn't overwhelming the health system," large numbers of patients are showing up in ERs seriously ill, "their diseases more advanced and in need of more complicated care."

They include "abdominal pain, respiratory problems, blood clots, heart conditions and suicide attempts, among other conditions."

Overloaded ERs have far more demand for treatment than staff able to provide it.

Patients arriving by ambulance aren't getting care they need because of the overload on staff.

"The midwest, the south, the northeast, the west…they are seeing this exact same phenomenon."

Because of overload, patients can't be admitted quickly and moved to a room for treatment.

She described what she called chaotic conditions that are "not even human. (It's) horrible care."

According to NEJM Catalyst Innovations in Care Delivery, "overwhelmed staffers are burning out."

Pre-2020, rarely ever did myocarditis and other heart-related issues affect young people.

Since mass-jabbing for flu/covid began last December, it's showing up in alarming numbers of children, adolescents and young adults.

On Wednesday, Slovak hockey player Boris Sadecky collapsed and died after a match from what was diagnosed as cardiac arrest.

When hospitalized, he was diagnosed with cardiac arrhythmia.

What caused the deaths of Sadecky and Aguero is virtually unheard of in physically fit professional athletes.

Similar problems are showing up with disturbing regularly in young and old alike.

Why is what's been rare among young people in the US and abroad now becoming more frequent?

Mass-jabbing in the US/West and elsewhere with experimental, inadequately developed, rushed to market mRNA drugs and vaccines changed what affects public health and fundamental freedoms.

Draw your own conclusions about an epidemic of serious illnesses — numbers much greater than in pre-2020 years.

And why aren't MSM sounding the alarm about what's going on?

Why are they largely or entirely silent about a crucially important public health issue?

What the NYT earlier called ERs overloaded with flu/covid patients are either ones jabbed for protection from the viral illness not gotten or suffering from other diseases.

What the Times and other MSM misreport on or conceal is what's crucial for everyone to know.