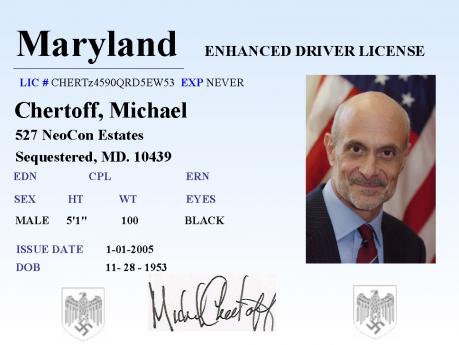 Mark Lerner is on the road nearly every moment he can find the money. His time is spent in appointments with legislators, sitting down with them to discuss the Real ID. When Mark starts talking they are polite, but not particularly interested. They think they know what the Real ID is about. But when Mark is finished they are worried and asking questions. Mark is the whistle-blower who brought the fraud by biometrics companies to the attention of the Securities and Exchange Commission only to be ignored for nearly two years before he went public. The silence from the SEC continues today. Mark is no longer silent. He is desperate to stop the Real ID because its implementation will hand over the most personal information and the biometrics of all Americans to the use of corporations and governments globally.

Americans have no idea what they are facing. Mark is determined that they be awakened to the their danger. The danger lies deep in plans long in place, from such innocuous agencies such as American Association of Motor Vehicle Administrators, AAMVA currently has an alliance called the DLC (Driver's License Compact) All but a few states belong to it. AAMVA recently forged a new alliance called the DLA, (Driver's License Agreement) Under the section entitled, “Jurisdiction,” within the DLA, it states that the United States, Mexico and Canada, will be under one umbrella of jurisdiction to share citizen's of each country's information contained in DMV data bases.

The Department of Homeland Security calls the AAMVA and its network, referred to as AamvaNet, the “Backbone of the Real ID Act,” meaning it is the essential system that will allow data bases to be connected and information shared. That includes all information garnered about Americans from all sources. AAMVA has introduced a new alliance between states and territories and countries. Those countries are the United States, Canada and Mexico. This is the precursor, what is needed, for the establishment of the North America Union, the Security and Prosperity Partnership.

This ties together the Trans Texas Corridor, Homeland Security, and the issuance of the Amero to replace the U. S. Dollar, along with and the most ominous branches of the United Nations with the corporations that now take for granted that their profit agenda should control the world.

“If you stop the Real ID you throw a major monkey wrench in their plans,” said Lerner for this interview. That is why Mark stays on the road talking to legislators who have been blinded by the carefully orchestrated half-information provided to them by the Real ID 'opposition' that either focuses on only one issue, for instance Cato Institute with privacy, or by those who simply cannot understand the scope of what is proposed.

Mark also spends his time in briefings with ordinary Americans and activists who come away shocked and appalled that the measure could have come so far and remained under their radar. One recent participant from a conference in California said, “I am numbed; shocked, I had no idea.”

Mark is used to that. His own participation began on the other side of the issue. Determined to do something about security in the wake of 9/11 Mark became a confident of Chairmen of the Boards, CEOs, and other senior officials in the Biometrics Industry. He learned all there is to know about the technologies and about the potential for profits that made those technologies the focus of excitement for billionaires across the globe.

Yet for Mark the focus remained not profits but security and between 2003 – 2004 he realized that for those investing it was profit and not security that was driving the testing. Over two years, he said, he realized that the technologies did not work as presented and the people involved were not to be trusted. Tests were manicured so that outcomes showing an effectiveness of 45% appeared as 90%. Alarmed and unable to get those falsifying results to stop Mark informed the SEC. He was told an investigation was underway. He waited. Then, Congress funded those same technologies.

Mark presents the documentation to anyone who questions his experience. A methodical and careful man, he kept the records, the same information he presented to the SEC.

Today he continues his battle saying that to be truly defeated the Real ID Act must be challenged and brought down simultaneously from three different directions. First, he calls on the grass roots, people, he says, must know and take action. When he speaks he asks them to tie up the phone lines of legislators who support the Real ID; to become informed on the Act, and to ensure that more people find out what is going on under the radar. Then he lays out how the Act can be challenged at the state level and federally. So, he says, “the wolf does not come back again dressed in the skin of yet another sheep.”

To date, Mark has spent four weeks giving evidence to several different committees of Congress in Washington D. C. He has spent weeks on the road, sitting down with legislators in Oklahoma, California, Pennsylvania, Missouri, Kansas, and other states. Every day he or his one occasionally paid staff person hear from activists or legislators in another state who now are beginning to realize what is really in store for Americans. A month ago the ACLU and ACLJ came together for the first time to help Mark in fighting the Real ID Act.

Typically, Mark stays at the cheapest possible hotels. Motel 6 costs less and so keeps him on the road to the next state. He eats fast food; it is cheap and filling. It is a far cry from the kinds of places he stayed while giving advice to the heads of the Biometrics Industry. Asked what others can do to help he responded for this interview, “We have a button on the site if you can spare anything to help. If you have no money we also accept frequent flyer miles.” He evidently means it. Major contributors to the effort have been few and the money tight. The money is so tight his group, Stop The Real ID Coalition, is just a blog that costs them nothing. Mark says that every penny counts.

And Mark, like the energizer bunny, just keeps going and will not stop, he says, until he has driven a spike through the heart of the Real ID because, as he said, “our freedom and the Constitution are in danger and I am an American.”