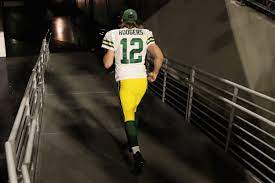 Few athletes in any sport accomplished as much as Rodgers.

A Green Bay Packers QB since 2005, his accomplishments include winning a Super Bowl, being named its MVP, named a Pro Bowl QB 9 times, an NFL MVP 3 times, an AP News athlete of the year, along with numerous other gridiron honors.

Prominence has its downside as Rodgers learned.

Because of his high-profile status, the pro-mass-jabbing 4th estate singled him out for unjustifiable criticism.

Unacceptably demeaning him is for following a known safe and effective protocol to protect against contracting flu/covid — along with treating and curing it in a few days if become ill from the virus.

If everyone followed Rodgers' example, the viral illness could be held at bay or obliterated in short order when outbreaks occur.

On November 3, the NFL said Rodgers tested positive for flu/covid and must avoid contact with other team players and staff for 10 days.

Left unexplained by the league is that when PCR tests are positive, the diagnosis nearly always is false — because of how they're administered.

It's highly likely that Rodgers is flu/covid-free.

Fake PCR test results provided a foundation for artificially inflating numbers of outbreaks to scare people into being jabbed with experimental, hazardous to health toxins designed to harm, not protect.

Mandating and encouraging jabs is a diabolical, state-sponsored, MSM supported scam to irreversibly harm maximum numbers of people from toxins they contain.

On virtually all major issues mattering most, MSM suppress what's important for everyone to know.

Nothing is more important than protecting health, well-being and fundamental rights from being lost.

In flagrant breach of the rule of law and journalism as it should be, MSM are all over Rodgers for his health-protecting right to stay jab-free.

The NYT slammed him earlier and again Monday — to its shame, further burnishing its greatly tarnished image for banning news vital to print over reporting it.

In stark contrast, it consistently turns science-based reality on its head by falsely demeaning it as "misinformation and junk science" — another bald-faced Big Lie in support of health-destroying jabs.

Defying science, he falsely accused Rodgers of "put(ting) out misinformation that could cause people to make bad decisions for themselves or their children (sic)."

Indisputable reality is the other way around.

With officially reported numbers almost certainly inflated — like phony numbers of outbreaks, deaths and other flu/covid related propaganda — it's unclear what percentage of professional and amateur athletes are jabbed for protection against flu/covid not gotten from their toxins.

The NYT falsely accused Rodgers of not being upfront about his jabbing status.

As discussed in a previous article, he explained his status, the protocol he's following and reasons why.

The Times lied claiming otherwise. It also ignored the right of privacy, including about health.

Although not explicitly expressed in the Constitution, Supreme Court decisions ruled for an implicit constitutional right of privacy, including for all things health-related.

"(T)he right of a person to be free from intrusion into or publicity concerning matters of a personal nature called also right to privacy… has been held to be encompassed in the Bill of Rights, providing protection from unwarranted governmental intrusion into areas such as marriage and contraception."

"A person's right of privacy may be overcome by showing that it is outweighed by a compelling state interest" — a rare exception clearly not related to the jabbing status of any American.

The Times falsely claimed the following, a bald-faced Big Lie it repeated time and again in defiance of science debunking it, saying:

They also greatly heighten the risk of becoming ill from one or more other potentially fatal diseases.

What's crucial for the Times to explain, it suppresses.

What it reports is state-approved propaganda intended to harm and eliminate maximum numbers of unwanted people.

By sticking to the fabricated official narrative and concealing indisputable science-based facts, the Times and other MSM are accessories to the crimes of planned genocide on an unparalleled scale and abolition of what remains of greatly eroded freedoms.

Nothing the Times and other MSM report on issues mattering most can be taken at face value — especially what relates to flu/covid and health-destroying jabs they consistently lie about.