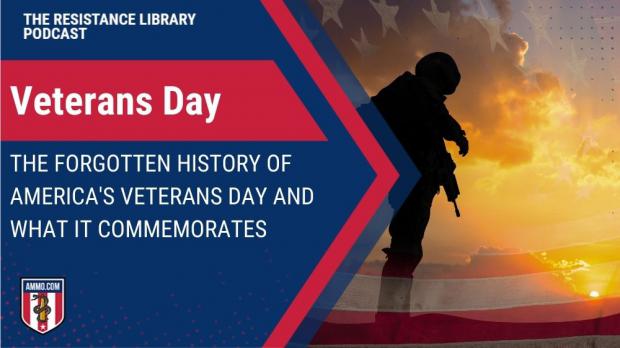 Veterans Day: The Forgotten History of America**Q**s Veterans Day and What It Commemorates

On this episode of The Resistance Library Podcast, Sam and Dave discuss Veterans Day. Veterans Day, celebrated each year on November 11th, was first celebrated on this same date in 1919, under the name of Armistice Day. The holiday was named in remembrance of the temporary ceasefire that brought about the unofficial end to World War I when, the year before, the Allied forces entered into an armistice with the Germans, stopping live battle on the 11th hour of the 11th day of the 11th month of 1918.

A year later, and nearly five months after the official end of the First World War (which occurred on June 28, 1919, with the Treaty of Versailles), President Woodrow Wilson proclaimed November 11th the first commemoration with the following:

"To us in America, the reflections of Armistice Day will be filled with solemn pride in the heroism of those who died in the country's service and with the gratitude for the victory, both because of the thing from which it has freed us and because of the opportunity it has given America to show her sympathy with peace and justice in the councils of the nations…"

He called for parades and public gatherings and a brief moment of silence at 11a.m. Two years later, on November 11, 1921, an unidentified American soldier was buried at Arlington National Cemetery in what became known as the Tomb of the Unknown Soldier.

You can read the full article "Veterans Day: The Forgotten History of America's Veterans Day and What It Commemorates" at Ammo.com.

And check out our sponsor, Libertas Bella, for all of your favorite 2nd Amendment shirts at LibertasBella.com.

Unvaccinated Troops Now Threatened With Losing All Their Veterans Benefits

Russia Has a Problem With Its Veterans

Memorial Day: The Forgotten History of America's Memorial Day and What It Commemorates

The Wounded Knee Massacre: The Forgotten History of the Native American Gun Confiscation