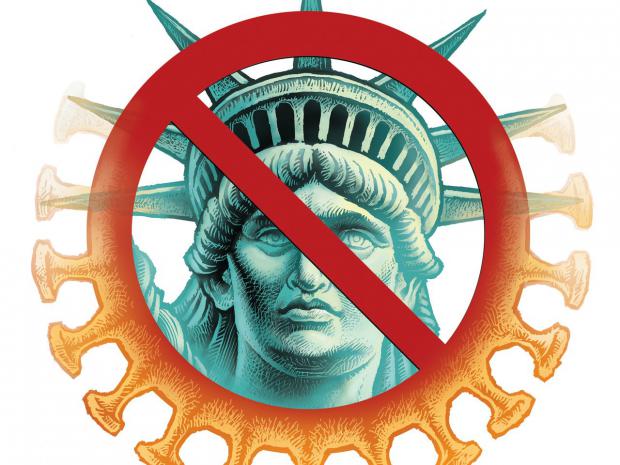 On November 6, a 5th US Circuit Court of Appeals three-judge panel issued a restraining order.

It temporarily blocked the Biden regime's tyrannical mandate for private entities with 100 or employees "to ensure their workforces are fully (jabbed with health-destroying toxins) or show a negative test at least once a week."

The same holds for healthcare facilities that receive Medicare and/or Medicaid payments, US contractors and Pentagon military personnel.

Complying with what no one should tolerates increases outbreaks, other illnesses, hospitalizations and deaths — the aim of US dark forces.

On November 6, the Fifth Circuit's Court of Appeals ruled as follows:

"Because the petitions give cause to believe there are grave statutory and constitutional issues with the mandate, the mandate is hereby STAYED pending further action by this court."

Showing no signs of changing its Nov. 6 ruling on Friday, Judge Kurt D. Engelhardt said the following for the Court's three-judge panel:

"From economic uncertainty to workplace strife, the mere specter of the mandate has contributed to untold economic upheaval in recent months," adding:

"Of course, the principles at stake when it comes to the mandate are not reducible to dollars and cents."

"The public interest is also served by maintaining our constitutional structure and maintaining the liberty of individuals to make intensely personal decisions according to their own convictions — even, or perhaps particularly, when those decisions frustrate government officials."

The Occupational Safety and Health Administration (OSHA) has no authority to "make sweeping pronouncements on matters of public health affecting every member of society in the profoundest of ways."

"The mandate is staggeringly overbroad."

It "fails almost completely to address, or even respond to, much of this reality and common sense."

Friday's ruling requires OSHA to "take no steps to implement or enforce the mandate until further court order."

While the agency may issue a public health-related "emergency temporary standard (ETS)," only once since Richard Nixon signed into law the Occupational Safety and Health Act on Dec. 29, 1970 — establishing OSHA — did this standard survive legal scrutiny.

Explaining why, Engelhardt stressed that US courts and OSHA agreed that because an ETS exerts "extraordinary power," issuance must be "delicately exercised, and only in those emergency situations which require it."

The draconian Biden regime's mandate "is anything but a 'delicate exercise' of this 'extraordinary power.' "

The Fifth Circuit's view suggests that it'll order the Biden regime to rescind its mandate when issuing a final ruling.

The battle for justice is far from over if this occurs.

The Supremes will likely have final judicial say.

Based on four previous unconstitutional rulings that upheld the draconian mandate, will they add a fifth?

It'll surprise if go the other way by upholding a likely — but clearly not certain — Fifth Circuit's ruling against the mandate.

Even if things turn out this way, Biden regime dark forces surely won't back off from their diabolical aim to destroy public health and abolish what remains of greatly eroded freedoms.

Congress, controlled by undemocratic Dems, can pass legislation for enactment into law to counter whatever the High or lower courts rule.

This action if taken would reverse things to square one.

It could make courts to the highest level leery about challenging the law.

My view is unchanged. The only way to defeat the Biden regime's diabolical scheme is by popular revolution.

Nothing less will work.

The scheme unveiled in early 2020 followed years of planning and refining strategy that included enlistment of MSM support.

Challenging, halting and driving a stake through its heart is crucial.

Draconian power yields nothing without demands with teeth.

Now is the time to get mad as hell and refuse to accept what no one should tolerate.

Thousands took to the streets in protest against pending legislation to harden them.

Victoria's bar association warned that the measure would give the Andrews regime "unlimited power to rule the state by decree."

It's crucial to defeat along with related mandates.

If otherwise, will similar ones be adopted in US/Western countries on the phony pretext of protecting public health — that their dark forces are going all-out to destroy?

What's going on throughout the West, in Australia, Israel and elsewhere is all about what I and others stressed repeatedly.

The diabolical made-in-the-USA scheme is all about wanting to eliminate millions and billions of unwanted people at home and worldwide.

It's also all about wanting the world community of nations transformed into masters and impoverished wage slaves.

If that's not enough to arouse rebellion against the worst of all possible worlds, what will?

It's crucial to kill the most diabolical scheme ever conceived against humanity by driving a stake through its heart — and act now.

It's the only viable option. No others can work.