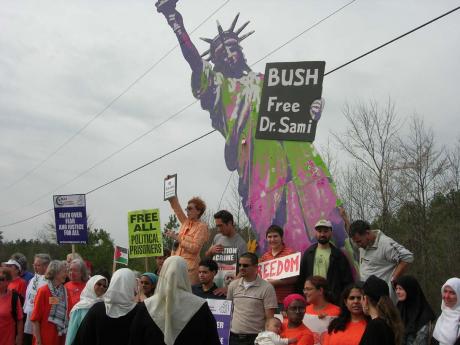 Sami Al-Arian is a political prisoner in Police State America. This article reviews his case briefly and updates it to the present.

Because of his faith, ethnicity and political activism, the Bush administration targeted Al-Arian for supporting "terrorism." In fact, he's a Palestinian refugee, distinguished professor and scholar, community leader and civil activist.

Nonetheless, the FBI harassed him for 11 years, arrested him on February 20, 2003, and falsely accused him of backing organizations fronting for Palestinian Islamic Jihad - a 1997 State Department-designated "Foreign Terrorist Organization (FTO)."

A week later, in spite of his many awards, impeccable credentials and tenured status, University of South Florida president Judy Genshaft fired him under right wing pressure.

Since February 20, 2003, Al-Arian has been imprisoned - first at Tampa, Florida's Orient Road jail, then on to more than a dozen different maximum and other federal prison facilities. He's currently on hunger strike at Warsaw, Virginia's Northern Neck Regional jail after being transferred back March 18 from Butner, North Carolina's medical prison.

Al-Arian's trial began in June 2005 and was a travesty. It lasted six months, cost an estimated $50 million, and the prosecution called 80 witnesses, including Israeli intelligence agents and victims of suicide bombings to prejudice the jury. It introduced portions of hundreds of wiretapped phone calls from over a half million recorded; "evidence" from faxes, emails and what was seized from his home; quotes from his speeches and lectures; conferences, events and rallies he attended; articles he wrote; books he owned; magazines he edited; and various publications he read - all legal and in no way incriminating unless falsely twisted to appear that way.

After years of effort and millions spent, Al-Arian was exonerated. On December 6, 2005 after 13 days of deliberation, the jury acquitted him of all (eight) "terrorism" charges. They were deadlocked 10 - 2 for acquittal on nine others. All of them were false and unjust.

Nonetheless, within days, the Justice Department said it would re-try him on the lesser charges. His lawyers called it legal but a highly unusual move. At the same time and in secret, a plea bargain deal was struck. It stipulated:

-- Al-Arian neither engaged in or had any knowledge of violent acts;

-- that he would not be required to cooperate further with prosecutors; and

-- that he would be released on time served and deported voluntarily to his country of choice.

In the meantime, Al-Arian remained in custody pending sentencing and deportation on May 1, 2006. He expected to be free and his ordeal ended. Instead, the presiding judge changed the deal. He sentenced Al-Arian to the maximum 57 months, gave him credit for time served, and ordered him held for the remaining 11 months, after which an April 2007 deportation would follow. Now it's extended as explained below.

In October 2006, assistant prosecutor Gordon Kromberg violated plea bargain terms by subpoenaing Al-Arian before a grand jury. His defense attorneys tried to block it by citing his "no-grand jury cooperation" provision to prevent DOJ from springing a perjury-obstruction trap. Defense's motion was denied, and on November 16 Al-Arian refused to testify and was held in contempt.

A month later, the grand jury expired, a new one was convened, and Al-Arian was again subpoenaed to testify. He continued to refuse, was held in contempt, and had his sentence increased without mitigation to April 7, 2008.

On March 3, 2008 Kromberg ordered Al-Arian before still another March 19 grand jury, three weeks before his scheduled release and deportation. On the same day, Al-Arian began a hunger strike against the government's continued harassment. It's his third one but is life-threatening for a man in his condition. He's diabetic and needs regular sustenance to avoid serious health problems. His January through March, 2007 strike depleted one-fourth of his body weight, gravely harmed him, and ended only at the urging of his family.

He's now 20 days into his latest fast, lost 30 pounds, is weakening, and his life is endangered. On March 12, Al-Arian was transferred to the Butner, North Carolina medical facility where treatment is poor, the staff indifferent, and in Al-Arian's case hostile to a designated enemy of the state. On March 18, he was returned to Warsaw, Virginia's Northern Neck Regional jail ahead of his third grand jury appearance. Again, he refused to testify, so he'll likely face new contempt charges and continued confinement.

"On behalf of Mr. Olson and Mr. Meitl and the entire legal team, (we are greatly disappointed by) the Justice Department('s) continu(ing)....effort to mete out punishment that it could not secure from a jury. Having lost (its) case (it's) openly sought to extend (Al-Arian's) confinement by daisy-chaining grand juries. As in other cases, the government has given Dr. Al-Arian the choice of an obvious perjury trap or a contempt sanction. (Either way assures his imprisonment. This) choice....is obnoxious to our legal system and contrary to any standard of decency. The mistreatment of Dr. Al-Arian remains an international symbol of how the Bush Administration has discarded fundamental principles of fairness in a blind pursuit of retribution against this political activist. We stand committed to fighting this great injustice and hopefully reuniting Dr. Al-Arian with his family and friends."

In the meantime, his long ordeal continues at a time lawlessness prevails over justice, and we're all Sami-Al-Arians in America's "war on terrorism."

Also visit his web site at sjlendman.blogspot.com and listen to The Global Research News Hour on RepublicBroadcasting.org Mondays from 11AM to 1PM US Central time for cutting-edge discussions with distinguished guests.

Everything you read here is the unvarnished truth. I was appalled at the Soviet style show trial that took place to convict this guy. I am even more appalled I then subsequently forgot all about it within six weeks like a good American.