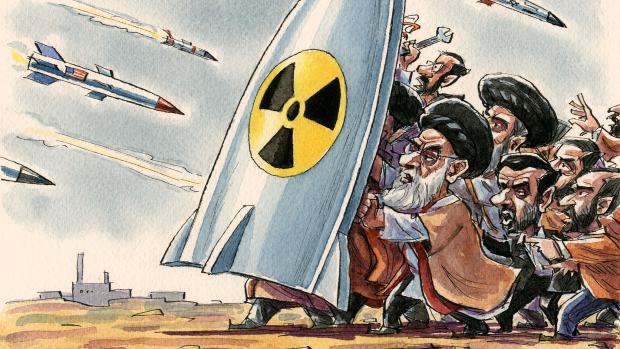 At times, Haaretz is on the right side of key issues — then ruins it by featuring fake news like US/Western MSM.

Falsely claiming that Iran is "sneaking its way to the bomb" reads like rubbish the NYT, BBC and other MSM feature about all nations free from US/Western control.

Not a shred of credible evidence suggests that Iran seeks to develop and produce nukes it deplores and wants eliminated everywhere.

The same goes for its banned chemical, biological and other terror weapons — used at its discretion, especially during preemptive wars on Gaza to cause maximum pain and suffering of defenseless civilians.

Like hegemon USA and its key NATO partners, Israel is an international outlaw.

It's a rogue state threat to regional peace and stability.

It's at war with its own people by pushing kill shots and freedom-destroying policies, along with neoliberal harshness to transfer maximum wealth from ordinary Israelis to privileged ones.

According to professor of nonproliferation and terrorism studies Avner Cohen's reinvention of reality:

"Iran is not going to have a breakout. They are sneaking toward the bomb (sic), cutting the distance slice by slice (sic)."

The above claim was unaccompanied by evidence.

Since none exists, Cohen had no facts to support is claim without substance.

At the same time, he virtually admitted that Israel is the only regional state with nukes.

Saying its ruling regimes fear losing their advantage, he added:

"(T)his monopoly is terribly important for Israel's place in the Middle East, and losing it would undermine Israel's position in the region significantly."

This view is shared by all Israeli prime ministers in recent decades.

Saying the Biden regime is "eager to go back to" the JCPOA ignored its efforts to kill the deal as affirmed by SC Res. 2231 — making it binding international and US constitutional law.

Before usurping power, the JCPOA was dead. Dominant Biden regime hardliners want an agreement that no responsible Iranian governments would accept.

That's why talks dragged on endlessly since last April with no prospect for resolution, according to the rule of law and what protects Iranian rights.

Haaretz and so-called experts it quoted and cited ignored that US sanctions on Iran and other nations flagrantly breach the UN Charter — rendering them illegal.

Before and after Trump's illegal pullout, Iran fully complied with all JCPOA provisions — in stark contrast to flagrant breaches by the US, Britain, France and Germany (the E3).

He lied claiming that "Iran wants to reach the status of a nuclear threshold state, which will leave it a very short distance from manufacturing a bomb if it wants to (sic)."

Saying Iran has enough near-weapons-grade uranium to produce a bomb in three weeks (sic) is part of no end to demonizing a nation free from US control.

Whenever accusations like the above and similar ones are made about Iran, its abhorrence and banning of these WMDs is left unexplained.

Also ignored is that the Islamic Republic of Iran never attacked another nation since established in 1979.

Its military is solely for self-defense, the UN Charter right of all nations.

In stark contrast, US-dominated NATO and Israel are perpetually at war against invented enemies.

Harel's claim that "that we are in a much more dangerous situation now than we were a year or two ago" has nothing to do with Iran.

UCLA's Burkle Center for International Studies senior fellow Dalia Dassa Kaye unjustifiably criticized Iran's legal right for removal of all illegally imposed sanctions, as well as assurances against reimposing them and others ahead.

"Iran wasn't coming clean on many issues that were hidden from the world (sic)."

He also said if Israel "decide(s) to get rid of (Iran's legitimate nuclear program with no military component) we will have to do it."

Preemptively attacking Iran would assure strong retaliation and high risk of greater war that could inflame the region more than already and beyond its borders.

If the Biden, Israeli and partnered regimes have launching WW III in mind, preemptively attacking Iran, Russia, and/or China could set the world ablaze in short order.

Resumption of Going-Nowhere JCPOA Talks Ahead

The Hawks Are Encircling Iran…Again