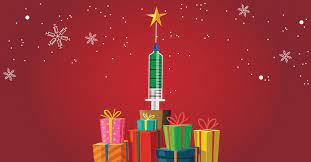 Bah humbug adherents — and all others — take note.

All things flu/covid is the grinch that's stealing holiday season 2021 and others to follow if what's going on isn't challenged and stopped while there's time to resist dark forces behind the most diabolical scheme ever rolled out against humanity with destroying the unwanted and enslaving survivors in mind — worldwide.

On Tuesday, monster Fauci was at it again.

Calling on the "overwhelming majority" of Americans to be jabbed, double-jabbed and booster-jabbed for the holidays, he repeated the long ago debunked claim about their nonexistent safety and effectiveness.

Yet once again he pushed the fake claim about "substantial" protection from jabs designed to destroy health, not shield from infection or protect against harm to health in any form.

In pushing boosters, he cited the waning immunity hoax.

He doubled down on Big Lies, falsely claiming that toxic boosters "really do work (sic)."

He's been incrementally moving the fully-jabbed goal posts from double-jabs to boosters, with forever-jabbing once of twice annually in the wings to be rolled out, likely early in the new year.

Claiming no sign of safety concerns about kill shots for 5-to-11-year-old kids, belies many thousands of children aged-18 and younger already seriously harmed by jabs designed to destroy their health.

"It is especially important for older populations who may be more vulnerable to severe disease and individuals with underlying medical conditions to get boosted now" — to finish them off faster, she left unexplained, adding:

The Pharma-controlled CDC she heads "is continuously monitoring the state of the pandemic"— that exists for the jabbed alone.

With malice aforethought, she lied like many times before, falsely claiming that "safety data showed that serious adverse events after a booster dose are rare (sic)."

Millions of adverse events, many serious ones, and hundreds of thousands of deaths from jabs don't lie.

Statistics and obits do their talking for them.

Claiming boosters designed to irreversibly harm health "are an important public health tool to strengthen our defenses against the virus" is another Big Lie whopper.

So is saying that the unjabbed "are at 14 times greater risk of dying from (flu/covid) than people who are" jabbed (sic).

According to indisputable facts, the vast majority of outbreaks, serious illnesses, hospitalizations, ICU admittances, and deaths are among the jabbed — not their unjabbed counterparts.

Like co-monster Fauci, Walensky is a serial liar and fraudster.

In cahoots with Biden regime dark forces and Pharma profiteers, nothing they say can be taken at face value.

Virtually everything they say about kill shots — and all things flu/covid overall — is with destroying health and eliminating maximum numbers of unwanted people domestically and worldwide.

Unparalleled genocide is their diabolical aim, kill shots their bioweapon of choice, fear-mongering mass deception their strategy — with lots of help from MSM press agents.

On Wednesday, the NYT pushed the Big Lie claim of over 770,000 US flu/covid deaths since last year.

The true figure is less than 10% of the fake one, likely around 5%.

Most falsely reported deaths from the virus are from kill shots.

Doing the job they're designed for, the toll so far is a tiny fraction of what's virtually certain ahead.

The more taken, the greater the harm, the more years of life lost, the more immiserated end of life can become with likely greater pain and suffering than by staying jab-free.