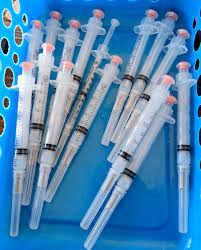 According to NYT fake news — based on state-approved talking points — "waning immunity" means that "booster jabs (are) strongly recommended" in perpetuity.

Pharma profiteer Pfizer "said that two (jabs alone) may not be sufficient (enough) to protect against (the more scariant than variant) omicron."

Invented evidence — that does not exist — shows that "omicron seemed to dull the power of two" jabs, according to Times fake news, falsely adding:

"(R)ising omicron outbreaks in…Europe" and elsewhere…suggest that it may move twice as fast as delta (sic)."

By March, the drug giant "expect(s)" to introduce a "variant-specific (jab) for omicron."

The fake Biden, fraudsters Fauci and Walensky et al urged booster jabs — for greater destruction of health than what double-jabbing alone can achieve.

On Monday, Fauci once again defied science and medical ethics by falsely claiming that "it's absolutely essential for those who have been (jabbed) and fully (jabbed) to get their booster shot" — with forever-jabbing in mind based on phony claims of waning immunity.

On Wednesday, the latter is what he meant by virtually saying that the definition of "fully" jabbed is a moving target.

It will certainly change. "It's gonna be a matter of when, not if."

A so-called three-jab regime is prelude to coming calls for annual forever-jabbing.

What's called for in Britain is prelude for pushing them throughout the West, the US included.

According to the UK state-owned and controlled BBC days earlier:

Booster-jabbing is the new abnormal.

Brits aged-18 and older will be offered boosters to be followed by pushing them for younger children.

The interval between jabs will be cut from six to three months.

According to Britain's Joint Committee on Vaccination and Immunization member Anthony Harden:

The Boris Johnson regime most "likely (will) require an annual boost" ahead — perhaps twice annually henceforth.

Ignored is that it's virtually no different from other flu/covid strains — none more scariant than others.

Britain is pushing things for annual or semi-annual boosters.

It's just a matter of time before what's to be suggested becomes mandatory.

US and other Western regimes are likely to replicate Britain's anti-public health policy legislatively if courts rule otherwise.

Pushing toxic flu/covid jabs with destruction of public health in mind,  WHO head Tedros Adhanom Ghebreyesus defied science by falsely claiming that omicron "underlines just how perilous and precarious our situation is (sic)."

On Wednesday, toxic drug-peddling Pfizer CEO Albert Bourla said "we will need a fourth dose (sic)" — with forever-jabbing in mind one or more times annually in the US and abroad.

Pushing them in its latest edition, the pro-toxic mass-jabbing NYT featured fake news by a Pharma-linked ER doc.

Turning truth on its head, he falsely claimed that "un(jabbed) people are filling hospital beds" in a West Michigan hospital where he works.

MAN ALIVE! My penis SHRANK more than an inch 'due to damage from Covid'...