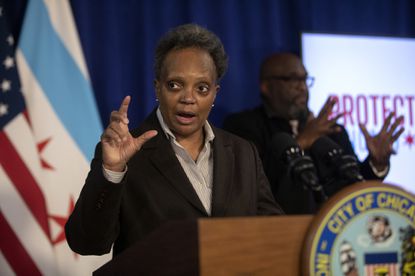 The price of a restaurant meal, spirits, workouts and public entertainment jumped exponentially in Chicago.

Straightaway after the new year's holiday weekend, city residents aged-5 and older must show proof of being fully-jabbed for protection against what flu/covid jabs don't provide.

It's required "to dine indoors, visit gyms, or enjoy entertainment venues where food or drink are served."

It applies to "(i)ndoor entertainment and recreation venues where food or beverages are served."

For Chicagoans aged-16 and older, a valid photo ID, jab card, a photocopy of the card, or a printed record from a jab provider is required for entry to any of the above facilities.

For businesses covered by the city's mass-jabbing policy, employers and establishments must check the jabbing status of everyone aged-5 and older on their premises.

No one is allowed entry without proof of being fully jabbed — unless have a valid exemption.

Employers and business establishment that fail to comply with the above mandate will be fined.

Masking that doesn't protect and risks respiratory harm is also required in all public indoor venues.

Defying science, international and constitutional law, Lightfoot falsely said she's "leav(ing) no options off the table when it comes to protecting the safety of our residents (sic)" — irreparably harmed by toxic jabs.

Claiming "no choice" other than what she ordered turned truth on its head.

If more Chicagoans are jabbed and multi-jabbed to comply with her mandate, flu/covid outbreaks will be infinitely greater than if no one in the city allowed toxins to be jabbed into their bodies.

Will more extreme measures than the above be imposed?

Future city policy depends on "whether or not they stop being hesitant and get" jabbed (sic), falsely adding:

Most all Chicagoans know someone diagnosed with flu/covid "because (we're) in the middle of the biggest (outbreak) surge (sic)."'

The vast majority of individuals declared infected with flu/covid are well, not ill — because claimed outbreaks are based on PCR test results that when positive are nearly always false, what Arwady left unexplained.

New city mandates will more greatly harm public health than already — while doing nothing to protect it.

They're also an incentive to stay away from where toxic jabs are required.

Protecting health demands shunning them. City policy is going the other way.

Last spring I lamented that Chicago where I live is no longer Frank Sinatra once called "my kind of town."

Nor are most other US states and cities nationwide.

Medical tyranny made them unsafe and unfit to live in — based on anti-science, the real thing ignored.

"Scientific data (sic) shows that those who are fully (jabbed) and have received their booster are better protected to fight the disease (sic), but the latest (more scariant than) variant is extremely contagious (sic), and we need to do everything we can to guard against spread (sic)."

The above rubbish is pseudo-science, not the real thing.

The emailed message to residents added that masking is required in common areas — ignoring that they don't protect and risk respiratory harm.

Residents "should continue practicing…social distancing in common areas" — despite no scientific evidence that shows it helps protect health.

Any resident (PCR) testing positive — that's nearly always false — must notify the management office and self-quarantine for 14 days, even if asymptomatic and healthy.

All of the above and much more reflects the deplorable state of today's brave new world that's unsafe and unfit to live in.

What's going on is all about destroying health and what remains of fundamental freedoms.

My constitutional rights are even breached where I've lived for over half a century.

Despite doing nothing to harm the health, well-being and rights of other building residents — or anyone outside it — I and others in the city and my building are ordered to follow practices that cause harm and don't protect.

A Nation at War on its People Cannot Stand

Decline and Fall of the US-Dominated West