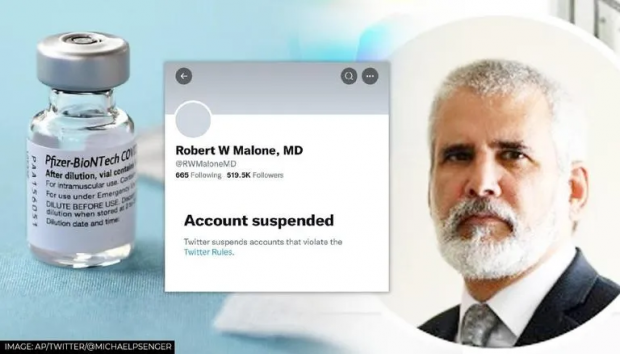 What's going on aims to silence truth-telling on what's vital for everyone to know.

It's about preventing truth-tellers from exposing and countering the fabricated official narrative.

What's unconstitutional and in breach of international law is the new abnormal in the US, throughout the West, in apartheid Israel and elsewhere.

It includes thought police monitoring what we say and do.

It's controlling the message by filtering out truth-telling content with electronic ease.

It's egregious censorship at a time when communicating online is the main way of connecting with others.

Free societies cherish diversity of opinions and actions according to the rule of law.

Restricting things for mass conformity, according to what higher powers demand, is tyranny — how hegemon USA and its vassal states operate.

Inventor of mRNA technology used in Pfizer and Moderna kill shots, Malone earlier expressed "grave concerns about the lack of transparency of side effects, censored discussion, and lack of informed consent that these bring."

He explained that the hazardous "spike protein (in Pfizer and Moderna kill shots) causes severe problems."

They include "bleeding disorders, blood clots throughout the body and heart problems."

They show up in individuals jabbed with the gene-altering technology.

Their lipid nanoparticles (LNPs) risk pathologic neuro-inflammation that can cause multiple sclerosis, ALS, cancer, heart disease and/or other serious diseases.

He compared toxic mass-jabbing to illegal Nazi-era medical experiments — in the name of "experimental medical research" and extermination of unwanted untermenschen.

Nothing about what's going on is related to "the common good," just the opposite, Malone stressed, adding:

Jabbed individuals are "super-spreaders" of health-destroying toxins to others.

The jabbed are "spreading the virus like crazy" by close contact with others, including to members of their own family.

There's nothing noble about what Malone called the "noble lie (and) paternalistic authoritarianism."

Immunization is supposed to protect, not harm.

That's not what mRNA jabs are designed for.

When taken as directed, mRNA jabs destroy health and hasten death — what they're being used for.

"Before you inject your child – a decision that is irreversible – I wanted to let you know the scientific facts about this genetic vaccine, which is based on the mRNA vaccine technology I created:

There are three issues parents need to understand:

The first is that a viral gene will be injected into your children's cells.

These proteins often cause permanent damage in children's critical organs, including:

Their brain and nervous system

Their heart and blood vessels, including blood clots

Their reproductive system, and

This (kill shot) can trigger fundamental changes to their immune system.

The most alarming point about this is that once these damages have occurred, they are irreparable.

You can't fix the lesions within their brain.

This (kill shot) can cause reproductive damage that could affect future generations of your family.

The second thing you need to know about is the fact that this novel technology has not been adequately tested.

We need at least 5 years of testing/research before we can really understand the risks.

Ask yourself if you want your own child to be part of the most radical medical experiment in human history.

One final point: the reason they're giving you to (jab) your child is a lie.

Your children represent no danger to their parents or grandparents.

It's actually the opposite.

Their immunity, after getting (flu/covid), is critical to save your family if not the world from this disease.

In summary: there is no benefit for your children or your family to be (jabbed) against (what poses at most (minor) risks (to health).

Given the known health risks of (kill shots), as a parent, you and your children may have to live with for the rest of their lives.

The risk/benefit analysis isn't even close.

As a parent and grandparent, my recommendation to you is to resist and fight to protect your children."

The above warning applies to all age groups for all branded jabs.

They cause irreversible harm by destroying health.

Silencing Malone by Twitter aims to keep peer-reviewed scientific facts about kill shots off its platform.

It's support for state-sponsored mass-extermination and tyrannical social control.

Malone reportedly had over half a million followers on Twitter.

His credentials are impeccable, his truth-telling on kill shots indisputable.

Suspending his account is part of Twitter's war on truth-telling.

It's another shot across the bow against speech, media and academic freedom.

It's about growing tyranny throughout the West.

It's about waging war on views that conflict with the fabricated official narrative.

It's about unsafe and unfit to live in US/Western societies.

It's about what no one anywhere should tolerate.