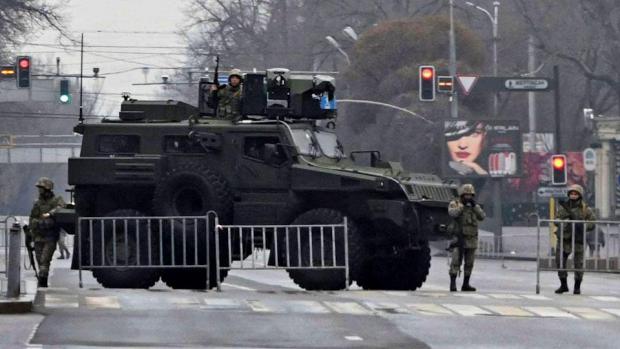 "Under the guise of spontaneous protests, a wave of unrest broke out" on January 2.

"It became clear that the main goal was to undermine the constitutional order and to seize power."

"We are talking about an attempted (made-in-the-USA) coup d'etat."

"The main (assault) was directed against Almaty," Kazakhstan's largest city.

Its "fall…would have paved the way for a takeover of the densely populated south and then the whole country."

"Then they planned to seize the capital," Nur-Sultan.

Tokayev added that he'll soon provide proof to the international community of the diabolical US/Western plot.

Participating on Sunday with other CSTO leaders, Vladimir Putin minced no words, saying that "Maidan methods" were used to try toppling Kazakhstan's government.

In April 2017, Putin vowed to prevent a US/Western color revolution in Russia or other CSTO member states, saying:

"We know different theories that are implemented in various regions of the world and lead to serious destabilization in these regions."

"Certainly, we must not allow this, and will make every effort to behave in a proper way in Russia and provide all support to our partners in the CSTO."

On Sunday, he explained that Kazakhstan turned to Russia and other CSTO nations to put down an "unprecedented challenge to its security, integrity and sovereignty," adding:

Violence was unrelated to high fuel prices, as falsely reported in the West.

Launched by "destructive internal and external forces," it posed an unprecedented threat to the nation and its people.

Moscow will not allow a "color revolution to be implemented" against Kazakhstan or other CSTO countries, Putin stressed.

He called for CSTO development of joint security measures to counter external and/or internal terrorism if occurs — to be "fully mobilized and ready to rebuff any provocations."

He described elements behind Kazakh violence as "terrorists, criminals and marauders."

Praising mutual trust, cooperation and readiness of CSTO member states to respond in time of Kazakhstan's need, he added:

"A contingent of collective peacekeeping forces of the CSTO (was) sent to Kazakhstan and, I want to emphasize this, for a limited period of time, for as long as the president of Kazakhstan, the head of state…finds possible to use it."

According to Kazakh authorities, "7,939 people (were) detained across the country."

Head of one is a foreign citizen with "connections to foreign terrorist groups."

"(H)e arrived in Kazakhstan to devise mass illegal action and attacks on the authorities and law enforcement."

"The search for his accomplices is underway."

According to Kazakh State Secretary Yerlan Karin on Monday:

"We encountered a hybrid terrorist attack on Kazakhstan that, as its end goal, sought general destabilization and possibly a coup (by) internal and external forces."

As mopping up operations continue, CSTO leaders will further discuss "the situation in Kazakhstan and measures to normalize it" on Monday, Kremlin spokesman Dmitry Peskov explained.

No evidence given, plenty of new world order projections, though.