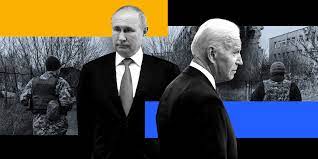 As expected, hours of talks in Geneva on Monday ended with no agreement on Russia's security demands.

Russia's main concerns "are on hold, and we do not see the American side's readiness to resolve them in a way that suits us."

At the same time, he stressed that "(i)t is very important that Ukraine can never join NATO in the future."

"We need iron, legal obligations, not promises, but guarantees."

"This is a matter of Russia's national security."

It must be addressed without "additional delays."

"We will not forego bilateral cooperation (sic) with sovereign states that wish to work with the US (sic)."

"(W)e will not make decisions about Ukraine without Ukraine, about Europe without Europe, or about NATO without NATO (sic)."

Sherman added that she offered to meet with Russian officials again for further discussion.

Talks accomplishing nothing on Monday showed the futility of continuing what doesn't work.

At this time, Russia intends to meet with NATO and OSCE officials on Wednesday and Thursday respectively.

If held, further talks this week and thereafter will accomplish nothing toward Russia's sought security — nothing toward normalizing relations with the US-dominated West.

It's long past time for Russia to shift from talks going nowhere to tough actions with teeth.

It's the only language that hegemon USA and its vassal states understand.

Talks on Monday again proved that diplomacy with the US is a colossal waste of time when undertaken.

Continuing what doesn't work is self-defeating.

If Russia wants to participate in talks with NATO and OSCE officials this week, so be it.

It wants legally binding guarantees of its security — likely in treaty form.

It demands no further NATO expansion eastward toward its borders, no deployment of hostile forces nears its territory, no nearby war-making rehearsals, no Pentagon bases in former Soviet republics, no Eastern Europe nukes aimed at its heartland.

The Kremlin should show in clear and unequivocal language — understood by Biden regime hardliners — that it'll accept nothing less than the above.

It should proceed with this type toughness, knowing that no matter what hegemon USA agrees to — even in binding treaty and/or Security Council resolution form — its ruling regimes consistently and repeatedly renege.

Both right wings of the US war party can never be trusted.

Their word is never their bond.

Vladimir Putin and other Russian officials should paste or otherwise affix the above reality to their bathroom mirror to see and understand daily when shaving or washing hands and face.

The above reality applies to all nations free from its control — especially Russia, China and Iran because of their importance on the world stage, notably when united against the imperial threat posed by US-dominated NATO.

After talks concluded on Monday, Ryabkov stressed that Moscow "cannot back away from" its security demands, adding:

On Monday, "(w)e spent a lot of effort…explain(ing) to (Biden regime delegates) why playing with fire is not in their interests, why the potential disregard for our absolutely justified presentation of the problem that things cannot any longer go the way they were in the past decades, cannot continue in relations with NATO."

"We need drastic changes in the narrative or our relations, its matrix, its framework."

What Russia sought diplomatically on Monday, it did not get.

Nor will further diplomacy succeed ahead.

Vladimir Putin and other senior Russian officials should conclude that diplomacy with hegemon USA and its European vassal states must end.

Not according to a statement by Russian Foreign Ministry spokeswoman Maria Zakharova, saying:

"We proceed from the premise (that) differences of opinion still have a chance and should have a chance for a professional, constructive, business-like conversation."

We…demonstrated and displayed this spirit (on Monday). We are ready for further work."

If Russia continues diplomacy with the US-dominated West — that can drag on endlessly like going nowhere JCPOA talks in Vienna — impasse will follow.

Nothing, positive will be achieved.

Actions, not futile diplomacy, is the only way ahead.

Will the Biden Regime's War of Words on Russia Turn Hot Ahead?

Lavrov/Blinken Talks in Geneva: A Waste of Time and Effort for Russia