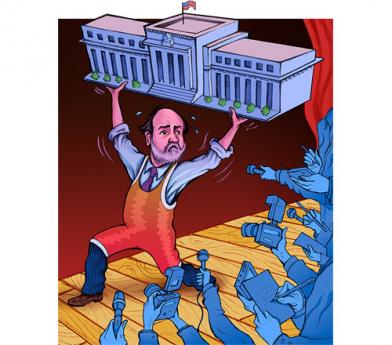 It's April Fool's day, and the joke's on us, the fools.

Beginning late Friday evening, March 29, we have been in the midst of an end run by the Federal Reserve System around Congress.  The FED is about to be given authority to regulate the nation's largest non-commercial financial institutions, including stocks and commodities.

The goal of the FED, as with all central banks, is three-fold: (1) to protect the largest commercial banks from their depositors, who occasionally exercise their contractual right to withdraw currency (the ungrateful cads); (2) to control entry of newcomers into the bankers' cartel (interlopers); (3) to keep the stock market from collapsing in a panic, thereby persuading depositors to withdraw currency.

The FED has always been the representative agency of the largest commercial banks.  Ever since 1787, it has been the goal of the large banks to gain control over the entire financial sector.

After President Jackson's defeat of the Second Bank of the United States in 1832, commercial bankers have sought to get a third bank.  This campaign escalated in 1896, in response to the Presidential campaign of William Jennings Bryan.  The decade-old movement to create a national central bank escalated even higher in 1907.  The immediate setting for this was the so-called bankers' panic of 1907. It was a recession.  Stock prices fell like a stone.  J. P. Morgan personally and corporately intervened to prop up stock prices, but the panic was too strong.  The stock market fell.  The economy went into a recession.

The Morgan banking interests and the Rockefeller banking interests joined forces to persuade Americans to accept the creation of a central bank.  They knew the voters were opposed to this, so they created a central bank that was disguised as a series of regional banks, which, apart from the New York Federal Reserve Bank, have had no real decision-making authority.  The organizers called this central bank the Federal Reserve System.  The ploy worked, although it took over six years and a new President to pull it off.  It also took the recession of 1913-14.

The ploy worked so well that Bryan lobbied Congressmen to vote for it.  He later said this was the greatest mistake of his political career.  This was an exaggeration. His greatest mistake was giving his "Cross of Gold" speech at the Democratic National Convention in 1896.  He personally destroyed the limited-government position of the Democratic Party, moving it sharply leftward, just as he was.

This story of the origins of the Federal Reserve System has long been available to the American public, but it has never been told by the mainstream media or the schools.  A comprehensive summary, with full documentation, was written by economist-historian Murray Rothbard, and was published posthumously in 1999.  You can download it here.

So, what we are being told about the absolute necessity of transferring regulatory control over the securities industry to the FED is merely an extension of a program that is well over a century old.  Same tune, new lyrics.

The Secretary of the Treasury, Henry Paulson, is the front man for this centralization of regulatory power under the FED.  He is the former chairman of Goldman Sachs, one of the largest investment banks in the world.  He saw a competitor, Bear Stearns, collapse within a one-week period, March 11 to March 17.

Investment banks do not take deposits.  They do not have the degree of economic protection from bankruptcy which commercial banks possess.  The trade-off to get such protection is surrender of control.  In hard times, entrepreneurs who are facing bankruptcy are willing to surrender autonomy for protection.

In a story run on Bloomberg on March 31, we read of the opposition to this end run by John Reich, director of the Office of Thrift Supervision.  This organization was created by Congress in 1989, after the collapse of the Savings & Loan industry in the mid-1980's.  It was one more example of locking the barn door after the horses had escaped.  Reich is now fighting to retain independence for his bureaucracy.  Reich has pointed out to reporters that this is not the first time that regulatory centralization has been attempted.


A dozen similar efforts by presidents, legislators and others over the last 60 years never "became reality," Reich wrote. His office distributed the letter to reporters on the weekend.

Despite his opposition, the proposed legislation is likely to pass this time.  Congress and the voters have been told for months that the subprime mortgage crisis threatens to topple the financial structure.  In other words, the horses are again out of the barn.  The new regulatory system will not get them back.

The insiders have always used stock market declines to scare Congress into surrounding power to the FED.  The FED is presented as a seemingly neutral third party -- beyond politics and beyond the money-grubbing ways of Wall Street. The Treasury Secretary is once again reinforcing the FED's insistence that it needs more power.

The FED created the housing bubble under Greenspan. Then Bernanke's tight-money policy popped that bubble.  The FED now claims that it needs more power to oversee who does what with the fiat money it creates.

In this debate over whether to transfer regulatory power to the FED, one word will not be uttered: "cartel." The FED has always functioned as the screening agency for the bankers' cartel.  Now the largest commercial banks and investment banks are clamoring for extending this control over the entire non-banking sector of the economy.

There will be very little opposition to this inside the Washington Beltway.  There will be none outside the Beltway.  The public has been frightened into submission. The head of the Security Exchange Commission has already capitulated.

The central bank's response to the credit freeze and the near bankruptcy of Bear Stearns shows how the role of regulators is being redefined by events, regardless of Paulson's review, which began nine months ago. SEC Chairman Christopher Cox isn't protesting the proposed merger of his agency -- formed during the Great Depression -- with the CFTC, saying that regulation would be better served by fewer organizations.      "Just as systemic risk cannot be neatly parceled along outdated regulatory lines, the overarching objective of investor protection can't be fully achieved if it fails to encompass derivatives, insurance, and new instruments that straddle today's regulatory divides," Cox said in a statement on March 29.

In other words, the main bureaucracies that would normally oppose this move have fallen into line.  Mr. Reich is an exception.  He is a minor figure in a marginal agency. WHAT WILL HAPPEN NEXT?

There will be hearings in Congress.  The media will announce bipartisan support for the restructuring.  A bill will pass.  It will become law. Then a massive, years-long restructuring will begin. No one will be fired from existing agencies.  They will be placed under the FED's titular control.  Lots of new economists and lawyers will be hired by the Board of Governors of the FED.

The politicians may think they can change things in Washington.  They can, but only marginally.  Bureaucracies move slowly when they move at all.  They protect themselves.  They use red tape to hide their activities and smother attempts by outsiders to interfere with their operations.  They use delay as their main weapon of defense.

The FED has no existing structure to oversee the non- banking financial system.  It will have to design it and then implement it.  It will then have to integrate this with existing agencies.  Lawyers inside and outside the Federal government will gum up the transfer of power.

Meanwhile, the horses are out of the barn.  The spread of bad debt through the world's financial system will continue.  The figure of $200 billion of bad debt has been tossed around.  This is a low-ball estimate.  A Reuters report (March 29) announced:

The financial market crisis could cause losses of up to $600 billion at banks and other financial institutions worldwide, a German magazine reported on Saturday, citing an internal report by German financial watchdog BaFin. . . .      "Based on current knowledge and the market situation, we believe $430 billion is more likely," the magazine quoted what it said was a 16-page report by BaFin as saying.

A report on BaFin's paper first appeared in German's Establishment magazine, "Der Spiegel."  The losses may not be able to be contained inside the banking system.

However, the magazine also said BaFin cited the risk that the financial crisis could spread beyond the banking sector to affect hedge funds, insurance companies, pension funds and even some non-financial companies.

So, we are facing falling dominoes around the world. This is the result of the carry trade: borrowing short and lending long.  This is what brought down the American savings & loan industry in the 1980's.  Decade by decade, carry-trade investing has spread to wider areas of the economy.  It has spread across borders and across industries.
The hoopla in Washington over having the FED lock the barn door is not going to get the horses back.  The loans were made.  They cannot be recalled.  Foreclosing on two million households at tens of thousands of dollars of legal fees per home is not feasible.  The loans may be able to be renegotiated in some cases, but this takes time.  It takes trained personnel.  Meanwhile, 244 of the companies that initially made the loans are bankrupt or have merged. Renegotiated terms of repayment at lower rates will impose capital losses.  No company wants to post these losses on its balance sheet.

The Federal Reserve System was always the lender of last resort for the commercial banks.  It is about to become the lender of first resort for the investment banks. The 20 largest investment banks act as the agents of the New York Federal Reserve Bank in implementing the Federal Open Market Committee's instructions.  These are the FED's primary dealers:

The FED must not allow a primary dealer to collapse. It owes the FED money.  So, the FED will do whatever is required to keep these investment banks alone.

We are moving into a situation where the FED will become the regulator.  It is already the de facto rescuer. It wants power to accompany its growing responsibility to prevent financial panic.  Responsibility without power is suicidal.  The FED is not deliberately suicidal.

This unelected, tenured, money-creating, privately owned cartel will create a committee to write the rules for other committees to regulate a financial structure that is so complex that no committee can possibly foresee everything that can go wrong.  This will substitute the palsied hand of regulation for the invisible hand of the free market.

The horses are out of the barn.  We are in the early phase of a public relations program to persuade investors to turn over more horses to the companies that the FED promises to protect.

Moral hazard -- guaranteed bailouts -- is alive and well in Washington.  It is about to be expanded extensively.  The presence of the FED, as the lender of first resort, will persuade entrepreneurs to take risks that they would not consider if the FED were not there as the guarantor.

Ludwig von Mises wrote decades ago that the results of government intervention into the free market will produce results opposite to those announced to justify the intervention.

The justification for this transfer of power to the Federal Reserve System is that the FED will provide greater stability for the capital markets.

Conclusion: prepare for more instability than we have seen since the Great Depression, which the FED was created to avoid.