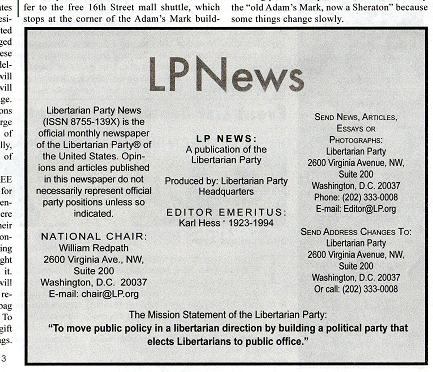 From this line of thinking comes the idea that we can best advocate against the Economic and Social Engineering of Americans via taxes and regulations, by making use of the political welfare made available through federal matching funds. We can also expect such a Mission Statement to not oppose an electoral system with new laws that would limit free speech and freedom of association, for fear of not having access to these federal handouts, instead of aggressively opposing these restrictions on our members and “defending the rights of the individual.”
But the most damaging aspect of this issue is the fact that the Libertarian Party is committing fraud. Plain and simple. I can't imagine how you could convince the ultimate judge (the general public) that the “Party of Principle” isn't being fraudulent with this blatant misrepresentation. Any success we may experience in the political process at a national level would be lost in a moment with a single featured segment on any number of national media programs. A public relations fiasco from which I fear the LPUS would never fully recover.
I hope many are asking how this could have happened. Many of you may have reacted with colorful language as I did. But I hope that you will direct your energy in helping me to make it clear that we do not support the direction the Libertarian Party of the United States has taken.
The original purpose for the creation of the Libertarian Party has never been more pertinent than it is right now. The r3VOLution is already well under way and if the LPUS were to aggressively challenge the Bad Guys and defend the Good Guys I guarantee that we'd have a great deal more fun and would enjoy tremendous support.
===============================
ADDITIONAL INFORMATION:
I have been informed from where the new "Mission Statement" was generated. Originally it started working its way into the LP as an LNC "policy" in the mid 90's and eventually would be added to a rewrite of the LP's bylaws. I remember this being just as controversial as the gutting of the 2006 Platform. It was another back door way of being able to accomplish exactly what has been done.
From this...
Statement of Principles
We, the members of the Libertarian Party, challenge the cult of the omnipotent state and defend the rights of the individual.

Governments throughout history have regularly operated on the opposite principle, that the State has the right to dispose of the lives of individuals and the fruits of their labor. Even within the United States, all political parties other than our own grant to government the right to regulate the lives of individuals and seize the fruits of their labor without their consent.

Since governments, when instituted, must not violate individual rights, we oppose all interference by government in the areas of voluntary and contractual relations among individuals. People should not be forced to sacrifice their lives and property for the benefit of others. They should be left free by government to deal with one another as free traders; and the resultant economic system, the only one compatible with the protection of individual rights, is the free market.
----------------
To This....
The Mission Statement of the Libertarian Party:
“To move public policy in a libertarian direction by building a political party that elects Libertarians to public office.”
Using this...
ARTICLE 3: PURPOSES
The Party is organized to implement and give voice to the principles embodied in the Statement of Principles by: functioning as a libertarian political entity separate and distinct from all other political parties or movements; moving public policy in a libertarian direction by building a political party that elects Libertarians to public office; chartering affiliate parties throughout the United States and promoting their growth and activities; nominating candidates for President and Vice-President of the United States, and supporting Party and affiliate party candidates for political office; and, entering into public information activities.
----------------------
Because those hoping for their chance at the wearing of "The Ring" are not able to get around this...
ARTICLE 4: STATEMENT OF PRINCIPLES AND PLATFORM
1.       The Statement of Principles affirms that philosophy upon which the Libertarian Party is founded, by which it shall be sustained, and through which liberty shall prevail. The enduring importance of the Statement of Principles requires that it may be amended only by a vote of 7/8 of all registered delegates at a Regular Convention.
--------------------
From David Nolan (co-Founder of the Libertarian Party):
Ernest:  Here is the text of a comment I just posted at TPW.


"The LP¹s Statement of Principles, written in 1972 by John Hospers, was adopted by the delegates to the party¹s first convention. It was modified slightly in 1974, and has remained unchanged ever since.

The ³Mission Statement² was written by Scott Lieberman and adopted by the National Committee (NOT by party members in convention) in 1994 or 1995. It is, in my opinion, a very poorly conceived and worded statement, as it implies that the party¹s primary objective should be the one thing we are not good at: winning elections. The LP has had considerable success in other endeavors, but not in the one area that the "Mission Statement" states as our primary mission. It is being used by "reformers" within the LP as a reason to water down our platform because telling people our true philosophy and goals will "scare people" and impair our redefined "mission."

Hopefully, the delegates to the 2008 convention will vote to specifically disavow the "Mission Statement," which has never been voted on by the membership. Our Statement of Principles and the Preamble to the national platform are the only "mission statements" that we need. The bogus, narrow statement approved by the LNC in 1994 (or thereabouts) is unnecessary and counterproductive."

1 Comments in Response to Now!... as in Not later

An excellent evaluation of the LP - thank you for expressing the truth so eloquently. "Now!" is indeed the time for true libertarians to adhere to libertarian principle and fight for it.