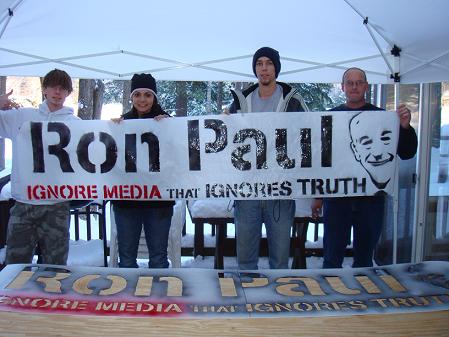 Ron Paul is still running for President of the United States, collecting convention delegates and going to the Republican National Convention in September. Why would  Dr. Paul endorse a 3rd party candidate that endorses the Flat Tax he opposes?
The Ron Paul campaign knows that there has been Internet traffic on the issue of Ron Paul getting involved with Libertarian Party politics from the beginning of the r3VOLution. My being an LP National Chair candidate in 2006 obligated me to make it very clear to the Ron Paul campaign as we began the Ron Paul Revolution in Phoenix, AZ that we had absolutely no expectation or desire for Ron Paul to get involved in Libertarian Party politics. Dr. Paul knows first hand what most libertarian activists know, that the Libertarian Party is just as prone to internal party politics as the R's and D's and that the r3VOLution is about the freeing of as many individual minds as possible.
Individuals have their own goals and no one in the r3VOLution felt that they were able to control the actions of other r3VOLutionaries or had a desire to be controlled, but know that support of Dr. Paul's libertarian message through the Republican convention process is a very rational decision for many.
There are many libertarian r3VOLutionaries that understood the opportunity that Ron Paul's campaign provided in the spreading of the libertarian message but they are not limited to Republican politics. The May 23rd - 26th 2008 Libertarian National Convention in Denver is known to all libertarians paying attention as the convention that will determine the future of the Libertarian Party and its future viability.
Without boring non-libertarians with too much detail I can sum up the divide as being between those that 'Oppose an all Powerful Government' and those that want 'Their Turn Being in Charge of an all Powerful Government'.
Former Republican congressman Bob Barr was recruited, placed on the Libertarian National Committee and promoted as a possible Libertarian Party candidate by LP insiders as someone that might spark the activism experienced by Ron Paul. But Bob Barr's initial support of such things like the PATRIOT Act and his current endorsement of the Flat Tax has proven to be a larger handicap than his supporters anticipated. When compared to Ron Paul it is clear why so many libertarians are supportive of a sitting Republican congressman.
I am of the opinion that Bob Barr's presidential hopes has come up against a fast approaching deadline and something must be done now for him to be considered by the Libertarians in Denver this May. He must have a campaign, and those supporting his effort are not the 'volunteer' types that work for free. Substantial sums of money must be raised immediately or there will be no Bob Barr campaign and the carefully woven plans of well placed insiders will disappear. So a month and a half from the nomination something must be done to save the effort.
All across the Internet there has been 'reported' rumors, insider information and wishful thinking that has elevated the issue of a Ron Paul endorsement to the point that the Ron Paul campaign has to get involved. If every thread of discussion on Internet Forums and Blogs concerning Dr. Paul were to be responded to by Paul's campaign they wouldn't be doing anything else. But his silence has elevated this rumor to a point that it must be addressed.
It's not going happen, and never was. Ron Paul is running for President of the United States, he's a sitting and just re-elected Republican congressman, his positions on several issues are very much different from Bob Barr's, Dr. Paul and many of his supporters have seen the workings of the LP from the inside and know many of the players personally, they know how the media would react and now I expect a statement from the Ron Paul presidential campaign to be imminent. And that he will make it very clear that while he is still running for president (all the way through the Republican National Convention) he will not be endorsing another candidate for President,... DUH!
I have made it very clear that I will have nothing to say about the selection of the Libertarian Party nominee. As a candidate for National Chair of the Libertarian Party at the 2008 Denver convention I don't think it appropriate. Bob Barr has every opportunity to present himself to libertarians and has done so several times across the country as a guest speaker at LP state conventions. But he has chosen not to announce his candidacy and has not participated in any of the debates with other LP candidates for President. However, just this last weekend he did announce his creation of an exploratory committee.
Ernest Hancock
Publisher – FreedomsPhoenix.com
Candidate for Libertarian Party National Chairman
www.ErnestHancock.org