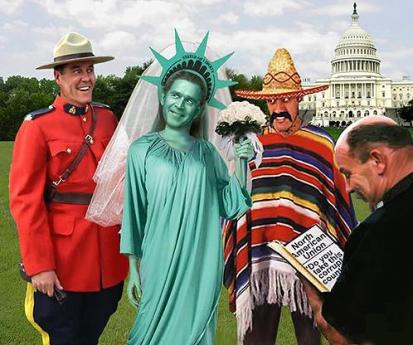 Terri Hill founded TURF, Texans United for Reform and Freedom, to fight for the rights of all Americans. She along with other Texans had been shocked at the move to turn the highways paid for by tax payers in Texas over to corporations, to be operated for corporate profit, on a lease that would last longer than most Texans expect to live. Located in San Antonio, Terri and TURF continue their battle against the looming specter of what is variously known as the Trans Texas Corridor, the North American Union, and the Security and Prosperity Partnership. By any name this long term grab for corporate hegemony over the whole of America by foreign based corporations is simply another form of fascism. We see fascism everywhere today.

Now, TURF and Terri fight continuously just to hold on to what Americans have always believed was theirs by right. Their enemy was spawned by our own movement. America is being 'privatized' out from under Americans, sold in plain sight to foreign corporations.

There was a time when the term, 'privatization' was thought to mean a return of control to individuals. Today those who have long been involved in the Freedom Movement are learning that it is something very different. How do you react to betrayal that is decades long? What do you say when suddenly you see the logic of a line of action that you once supported? That is the question that now confronts all of us who understand that the foundation on which the Revolution stands is the sovereignty of the individual and the individual's right to exercise power over their own life. Freedom does not equal efficiency. Corporations are not individuals and have no rights.

We have been betrayed by the familiarity of those who we trusted. The reasons for that betrayal are profit and ego; they go deep into the history of our movement and even deeper into the emotional investment that those in positions of power come to feel in their own work, even when that work is revealed to be the antithesis of everything they, and we, profess to believe.

No one involved in the original Freedom Movement would have expected that one of their original heroes would be haunting the offices of state legislators in a vigorous campaign to see this naked grab for profits by corporations installed in Texas and throughout America. But that is exactly what Terri has witnessed. Over and over she heard the word, 'privatization' used to describe what she well knew was actually the corporatization of assets paid for by people like herself, hard working Americans who now would be expected to pay in perpetuity for something financed through taxes that grow ever higher.

The Security and Prosperity Partnership is one component of a larger plan by global interests. It is represented by the Bush Administration, intended to convert America into one large plantation filled with serfs. We, the serfs, are intended to be virtual slaves. There is no need for direct ownership because everything we do can be monitored and controlled by the same corporations who, through the Real ID, will own the very information that determines who we are. Under the SPP we move under the control of corporations and effectively outside of the Bill of Rights. The Real ID, reinforced by biometrics that were fraudulently sold to Congress as reliable, are the lynch pin of the plan that is now reaching its full fruition. All of this is being rapidly brought on line.

The man appointed by Governor Rick Perry, the man who coined the word, 'privatization,' and founded Reason Magazine and Reason Foundation is Robert Poole. If you have been in the movement for very long you know his name. Once, Robert Poole was admired for his work, looked up to as a hero for freedom. Today he is on the other side, opposed by the out-gunned and indomitable activists like Terri Hill. Terri, the mother of five children, is fed up with all forms of government. She also chose to home school her children. For Terri freedom is personal.

Most people who knew Bob through the last decades would not have believed this possible. But it is the voice of Bob Poole that you hear advising the frustrated Texas Senate Committee on how to evade the law after they spent the 2 – 2 ½ hours discussing the Federal prohibitions for the kind of agreement Poole urged be adopted. This happened in the afternoon of February 5th, 2008. Terri reports that she often saw Poole talking to legislators there, working to persuade them to pass into law a measure that their constituents begged them to stop. Poole, who retired to Florida some years ago to play with his model trains, has been very busy, using the respect according him to sell fascism in Texas.

That outcry began as soon as the public learned what was being considered. The legislature reacted by hiring lobbyists, another move that was clearly proscribed by Texas law. The original law enabling the grab, HB 3588, was passed by the Texas legislature in 2003.

In Texas the legislature meets only every two years for a few months beginning on January 1st and continuing for around four months. When the ordinary people found out there was hue and cry you could hear across the state. Immediately people like Terri became active. A new generation of freedom fighters launched their own battle. Their activism resulted in a measure, HB 792, in 2007. But according to Terri Hill that was at best a partial victory. While hundreds of thousands of Texans emailed and called to complain what was achieved was a partial moratorium, a measure that leaves Texas, and America, vulnerable today.

What Poole is promoting is called a Comprehensive Development Agreement, or CDA, a measure that, if not defeated, will result in the conversion of the entire infrastructure of government to the control of corporations, control that cannot be ended by a vote, even if such was possible given the presence of Diebold's Vote Stealing Machines. Such agreements allow corporations to control and profit from their contracts for fifty years with another fifty years available at their option.

What this provides to corporations is a safe haven for their money, money stolen from Americans that is then 'invested' through bonds that protect their ill-gotten gains for another four generations.

Bob's motivations are clear. This phase of 'privatization' is a natural extrapolation of his previous work, begun in the early 1970s with his book, “Cutting Back City Hall.” Then, we believed that freedom, not fascist profits and efficiency was the point of the exercise. Seeing the ugliness of the truth takes a special kind of courage, a courage that few possess. Over the last thirty plus years Bob has been heaped with honors, lauded and celebrated as a defender of freedom. It would take a better man than Bob Poole to acknowledge his mistake. That is why the biggest lies die last.

This is what Bob Poole has done with the trust invested in him. He either failed to see, or seeing, could not confront the contradiction lacking the courage. The failure to acknowledge mistakes when the emotional investment extends across an entire lifetime is, perhaps understandable. But it is cannot be overlooked. This is the failure to objectively see and acknowledge that drove Ignaz Simmelweiss, an obstetrician in Vienna in the middle 1800s, to infect himself with child bed fever. His fellow butcher – surgeons refused to follow his example and save lives by simply washing their hands because to do so would leave them with a monumental burden of accountability. Too many had died for them to see. Ideas are powerful. Because they are powerful those who build new institutions bear a terrible responsibility. Along with the praise and profits they must bear the consequences and shoot their own dog when it proves to be rabid, which 'privatization' has proven to be.

Poole has long been associated with those we now understand to be the architects of fascism, “Robert Poole founded the Reason Foundation in 1978, and served as its president and CEO from then until the end of 2000. He was a member of the Bush-Cheney transition team in 2000. Over the years, he has advised the Reagan, George H.W. Bush, Clinton, and George W. Bush administrations on privatization and transportation policy.”

Next time you get a fund raising letter from Reason Magazine or Reason Foundation remember who is supporting the Trans Texas Corridor; remember to look more closely at all of the ideas they have spawned, including another Poole brain child, the right to pollute. If the idea does not return control to the individual, affirming that inherent autonomy, ask yourself who is receiving the profits.

Terri Hill and TURF will continue their fight for freedom. They must. Freedom is the one thing you do not have until you give it to everyone, now and always and they see and understand what freedom is.