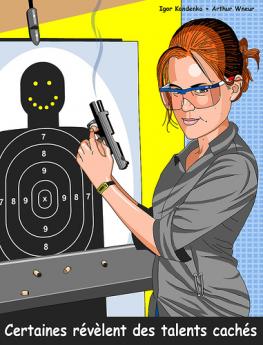 by Carma Jackson, Executive Director, Armed Females of America
On February 25, 2008 I was convicted in the Mesa Municipal Court for a criminal offense that does not exist in Arizona.
I am a seasonal resident of Arizona and my automobile registration renewal was not forwarded to me and I just didn't give it any thought that my tags had expired.  After all, who really knows when their registration expires until they get the notice? Eventually I was pulled over for expired tags and received a citation and instructed by the officer to get the tags renewed, show proof to the judge and pay a $50.00 fine as stated in the Arizona statutes.

I appeared before a judge that decided it was his duty to legislate a new law from his bench.  The judge informed me that since I was a "non-resident" of Arizona this is a criminal matter, not civil.  That judge convicted me of a class 2 misdemeanor, fined me $107.00 with an admonishment that it could have been $750.00, 4 months in jail and 2 years probation.  I was stunned and literally speechless by his attempt at benevolence.

The judge did tell me that when I pay my fine I could file a motion to vacate the judgment.  I did and it was promptly rejected by the Mesa City Prosecutor.

My search of Arizona statutes do not reveal such a law, but ARS 28-2532 clearly states "resident or nonresident"… is subject to a fine of $50.00 upon presentation of current registration, which I did.

I am not disputing the fact that I violated the requirement to have a valid out-of-state registration.  I am outraged over this absurd conviction and my denial of Due Process.

I am not sure at this point if the actions by this judge stemmed from ignorance of the law, ignoring the actual law, or judicial terrorism.  In any event any member of the state judiciary should exercise more diligence before meting out convictions on any scale.

Getting this class 2 misdemeanor charge thrown out, I am sure, will become a nightmare.  So far, my calls to the offices of state elected officials have resulted in calls not being returned or just blunt advice to see an attorney.  And why should I spend my money on an attorney when the judge could reverse this conviction the same way it got there…with a stroke of a pen!

A little cursory checking in the AZ statues I found that if I had on my person a concealed firearm I would only be charged with a "Petty Offense"! Go figure!

It should be clear to everyone at this point that "snowbirds" are second class citizens in the eyes of Arizona and I have been singled out for additional penalties for simply being a resident of another state.

This is a violation of the 14th Amendment to the US Constitution.

Next week I will be returning home with a criminal conviction from Arizona…Who's going to be next?