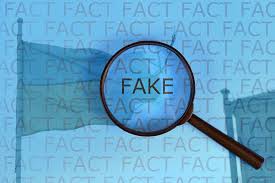 Update on Day 78 of Russia's SMO in Ukraine

Reality on the ground in Ukraine is worlds apart from MSM fake news regurgitation of the fabricated official narrative.

The US-installed Kiev regime is so desperate to conceal reality from its repressed, exploited, impoverished and immiserated people that state-controlled Unian top-features the following fiction.

Updated with more of the same rubbish, it falsely claims:

US/Western MSM rubbish consistently turns truth on its head about things on the ground in Ukraine — but nowhere near outlandishly as the above bad fiction.

Separately on the ground, the Zelensky regime wants its Nazified Azov thugs inside Mariupol's Azovstal steel plant back.

According to its so-called deputy prime minister Iryna Vereshchuk:

"We have proposed to the Russians the following swap:"

"We evacuate our boys (sic) from Azovtsal via a humanitarian corridor" — what Russia established days ago when offered Azov Nazis life over certain death if remain inside the plant.

Instead of explaining the above, Vereshchuk added:

"In exchange, we give back captured Russians under the standard rules of prisoners of war exchange."

"There has been no agreement at the moment."

"The talks are ongoing."

They include torturing to death and dismembering the bodies of Russian POWs.

They committed similar atrocities against Ukrainians with Russian roots and others believed to be sympathetic toward the country.

Nothing less than accountability for their high crimes is justifiable.

Separately in stark contrast to MSM fake news about Russia's SMO in Ukraine, the latest update from its Defense Ministry explains reality on the ground, what's suppressed in the US/West.

Through Wednesday, Russia destroyed the following targets in Ukraine since its SMO began on Feb 24:

In the last 24 hours, Russian forces struck 33 Ukrainian command posts, as well as 407 areas where troops and military equipment were concentrated.

Another five ammunition and fuel depots were destroyed.

Hundreds of Nazified fighters were eliminated.

Another Ukrainian warplane, a helicopter and nine UAVs were shot down.

Dozens of armored and motor vehicles were destroyed.

When what remains of Ukrainian warplanes and drones are spotted airborne, Russian air defenses and aircraft have been systematically destroying them.

When Ukrainian artillery and other weapons are spotted on the ground, they're attacked and destroyed.

Kiev almost never airs videos of military triumphs by its forces because there's nothing triumphant to crow about, Johnson adding:

"Given the dire situation confronting Ukraine, I do not think they would hesitate for a minute to publish a video touting their success."

"Once again, it is the dog that did not bark. No bark, no victory to show."

Its forces have been significantly battered and degraded.

Claims otherwise by puppet Zelensky, Britain's BoJo, other Western officials and their MSM press agents don't hold up in the light of day, Davis saying:

"One would think that all these (rosy scenario) optimistic statements were borne out of tangible evidence that Russia is losing."

"Instead, (polar) opposite is happening."

"Russia's strategy in Donbass is (clear) with the capture of each major town, and it doesn't bode well for Kiev."

"Militarily speaking, there is very little hope that promised (US/Western) heavy weapons and ammunition…can be…brought to bear…to change the course."

Davis left unexplained how Russian forces are destroying what US/Western regimes are supplying when crossing into Ukraine or shortly after arriving.

Claims by Kiev and US/Western regimes about Ukrainian forces holding their own and pushing Russian forces back are worlds apart from reality on the ground.

Davis chalked them up to the "unwillingness" of the West and Ukraine "to face hard (indisputable) truths," adding:

"As a result," Ukrainian forces will continue being battered, degraded and eliminated.

They'll be more destruction on the ground, along with an exacerbated "economic and food crisis" in Ukraine for its people.

Davis also expressed concern about what I fear and wrote about, saying:

For the US/West, the longer Russia's SMO continues, "the risk (of) miscalculation, (an) accident or foolish act (could result in) a direct clash between Russia and NATO."

According to the principle of collective defense as stated by Article 5 of the North Atlantic Treaty:

Triggering Article 5 "could drag the US into war with a nuclear superpower," Davis warned.

For what, he asked?

There's "nothing at stake in (Ukraine or) Eastern Europe (overall) that is worth getting drawn into a potential nuclear war with Russia…a war from which we may not survive."

To prevent potential disaster, Davis called for negotiating conflict resolution to avoid the risk of things spinning out of control.

"(D)o whatever it takes to end fighting," he stressed.

The alternative poses too great a risk to the US/West, Ukraine, Russia and humanity.