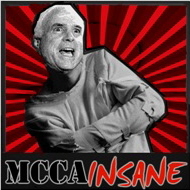 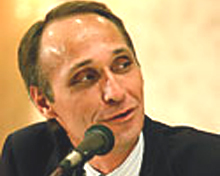 Barry Hess, the Glendale resident who sought the Libertarian presidential nomination in 2000, told our reporter today he thinks McCain is "nuts."

In assessing the presidential race with Yellow Sheet this morning, Hess, who also has run for governor several times, said Clinton, Obama and McCain are all members of the "Republican-Democrat Party" and while they are zeroes as far as future presidents, he least prefers McCain.

"Obama can say nothing better than anyone I've met," Hess said, adding, Hillary is "delusional." "[Think about] waking up [that] groggy old lady at 3 o'clock in the morning for an emergency," he said.

McCain, Hess said, lied to his face in the 2004 campaign for Senate when the senator denied he prevented Libertarian opponent Ernest Hancock from taking part in a public debate in Tucson.

Hess said he does not agree with Green Party positions, but thinks its qualification for the ballot in Arizona is a good thing. "I certainly like the competition of ideas," he said.

The Libertarian Party is "getting the screamin' Greens and neo-cons" as new members, including former Cong. Bob Barr and Sen. Mike Gravel.

2 Comments in Response to McCain labeled as 'nuts'

McCain? Nuts? Who knew! Actually, I think McCain accurately represents a persona of the Baby Boomers; a Boomer archetype if you will--The Angry White Guy With Nothing Left to Lose. Fits right in with the archetypical Oppressed black Man and the archetypical Angry Feminist. these choices do in fact represent quite accurately a sizable cross section of the Baby Boomers. God help us all!

McCain! Nuts?
He is being ushered right into the oval office.His lies go unheard,his corruption is unchecked,and nobody has the nerve to question him....SO! Who are real "NUTS".
The American people,that`s who.