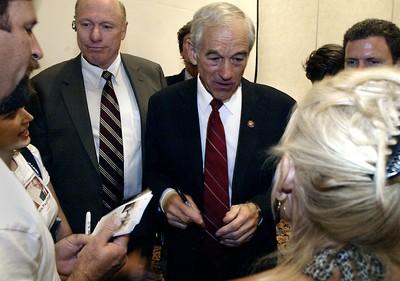 RENO, NEVADA — The Nevada State Republican Convention was called to an abrupt halt on Saturday, after delegates supporting Texas Congressman and presidential candidate Ron Paul were elected to the 2008 Republican National Convention.

Prior to the recess, the John McCain campaign asked for and was not granted a recess to meet with their delegates. In response, Convention Chairman Bob Beers unexpectedly announced that the contract on the convention hall had expired and the convention would be reconvened at some future date.  The Ron Paul campaign is confident that the Nevada State Republican Party will ensure that the votes cast by of all of the delegates at the April 26th Nevada State Republican Convention will be respected.

In Congressional District 3, Ron Paul supporters Arden Osborne, Carl Bunce, and Elizabeth BelCastro were elected, followed by Bruce Woodbury, the County Commissioner for Clark County.  State Senator Barbara Cegavske, a candidate for national delegation in her Congressional District, initialed the credential badges of state delegates as they cast their votes and observed the vote counting.

In Congressional District 2, Congressman Dean Heller was in the lead, followed closely by Paul supporters Robert Terhune, Pat Kerby, and Marla Criss.  When the count was halted, the remaining (approximately 50%) of the uncounted ballots were placed into seven sealed envelopes, signed by supporters of both John McCain and Ron Paul, and deposited in a safe at the Peppermill Casino in Reno.  The Ron Paul campaign obtained Xerox copies of the signatures and drivers licenses of those who signed the sealed envelopes and deposited them in the safe.