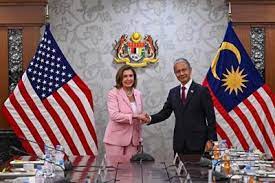 Pelosi to Visit Taiwan As Expected

Ignoring what China considers its sovereign territory, warning Pelosi to stay away, an unnamed Biden regime and Taiwanese official said she's expected to visit the island — during her provocative Asia/Pacific tour.

While it's unclear when she'll arrive, it may be after her final scheduled stop in Japan.

Once again on Monday, China's Foreign Ministry spokesman, Zhou Lijian, warned her against coming where she doesn't belong, saying the following:

"The Chinese side has repeatedly made clear to the US side our serious concern over Pelosi's potential visit to Taiwan and our firm opposition to the visit."

"We have been stressing that such a visit would lead to serious consequences."

"As President Xi Jinping stressed to (to the fake) Biden (when they spoke by) phone (last week), the position of the Chinese government and people on the Taiwan question is consistent."

"Those who play with fire will perish by it."

"We believe that the US side is fully aware of China's strong and clear message."

"We are closely following (Pelosi's) itinerary."

"A visit to Taiwan by her would constitute a gross interference in China's internal affairs, seriously undermine China's sovereignty and territorial integrity, wantonly trample on the one-China principle, greatly threaten peace and stability across the Taiwan Strait, severely undermine China-US relations and lead to a very serious situation and grave consequences."

"We want to once again make it clear to the US side that the Chinese side is fully prepared for any eventuality, and that the People's Liberation Army of China will never sit idly by."

"We will make a resolute response and take strong countermeasures to uphold China's sovereignty and territorial integrity."

"What the US should do is to abide by the one-China principle and the stipulations of the three Sino-US joint communiques, fulfill (the fake) Biden's commitment of not supporting 'Taiwan independence' and not arrange for a (Pelosi) visit to Taiwan."

"We would like to tell the US once again that China is standing by, and the Chinese People's Liberation Army will never sit idly by."

"China will take resolute responses and strong countermeasures to defend its sovereignty and territorial integrity."

"As for what measures, if she dares to go, then let's wait and see."

"We shouldn't be intimidated by (China's) rhetoric or…potential actions (sic)."

"This is an important trip for the speaker to be on (sic), and we're going to do whatever we can to support her (sic)."

And this Kirby perversion of reality:

"There is no reason for the Chinese rhetoric (sic)."

"There is no reason for any actions to be taken (sic)."

"It is not uncommon for congressional leaders to travel to Taiwan (sic)" — where they don't belong..

"It is very much in keeping with our (global drive for hegemony) and consistent with our support to Taiwan under the Taiwan Relations Act (sic)."

The 1979 The Taiwan Relations Act  terminated US relations with Taiwan's ruling authorities."

According to Freeman, unacceptable US policies toward China since Trump's tenure "ensure(d) that virtually no one on the China mainland believes a purely peaceful resolution is still feasible."

"It's been a long time since the danger of war over Taiwan has been as great as it is now."

By breaching its commitments to Beijing, the US "established a reputation in China for faithlessness that precludes anyone there trusting    (its) further commitments."

Beijing, Taipei, and Washington are "nearing the point at which we can no longer avoid very unwelcome choices."

"Beijing now sees no credible prospect that the issue of Taiwan's relationship with the mainland can be resolved by peaceful means without at least some element of military coercion."

With the illegitimate Biden regime sticking to policies initiated by Trump, the risk of Sino/US confrontation is ominously high.

Where things are heading against Russia may also occur against China in the Asia/Pacific.

At a time when an everything bubble is deflating throughout the West, when a protracted Main Street Depression looms, when near-record high US inflation appears heading higher, when US national debt is unrepayable, when draconian policies are increasing, when an unparalleled perfect storm is just beginning, the empire of lies may try shifting public attention from homeland misery by changing the subject.

If hegemon USA launches WW III, it'll likely be against Russia, China, Iran or perhaps all of the above.

On Monday, the WSJ said the Biden regime is "weighing new measures" against Iran, a UAE businessman and various companies "suspected of helping export of Iran's" legitimate sales of oil to willing foreign buyers.

Like other MSM, the Journal ignored that US sanctions are illegal against all targeted nations.

The empire of lies is increasingly pushing things for direct confrontation with Russia.

If Pelosi affronts China's sovereignty by going to Taiwan and Beijing reacts strongly to her hostile action, the risk of Sino/US confrontation would increase.

And if the empire of lies goes all-out to halt Iran's legitimate oil exports — and/or allies with or OK's Israeli strikes on Iranian nuclear facilities with no military component — all bets are off on what may follow.

Hegemon USA poses an unparalleled threat to world peace and stability — by its rage to dominate the world community nations by brute force.

If global war erupts for the third time in world history, it'll be made-in-the-USA like the last time around — this time when opposite sides have thermo-nukes able to end life on earth if enough are detonated.

If Pelosi ignores repeated stern Chinese warnings against visiting Taiwan on her provocative Asia/Pacific tour, "(a) new…crisis could" follow, adding:

Her hostile action could "push China's reunification" with what it considers a breakaway province.

Whatever follows her visit to sovereign Chinese territory — defying stern Beijing warnings to stay away — "will definitely have a huge(ly) (negative) impact on the remaining foundation of cooperation in China-US relations."

According to an old Chinese saying:

"Avoid being too pushy to avoid being pushed aside."

Hegemon USA has a long, disturbing history of trampling on the rights of other nations — and its own people — in pursuit of its diabolical aims.

Her extremist agenda is militantly hostile toward what the vast ordinary Americans hold most dear.

Her voting record proved it, including by backing:

The scourge of neoliberal harshness.

Tax cuts for the rich — to benefit her, her husband and super-rich interests she supports.

The 1999 Gramm-Leach-Blily Act repeal of Glass-Steagall, permitting some of the most egregious financial abuses in the modern era.

The September 2001 Authorization for Use of Military Force (AUMF) against invented enemies threatening no one — permitting endless wars of aggression in multiple theaters:

Kill shots and all else related to flu/covid — with depopulation, increased social control and elimination of what little remains of greatly eroded freedoms in mind.

All things related to the worst of apartheid Israel.

The above and much more of the same pockmarks her pro-wealth, power and privilege record — a growing divide between super-wealth and increasing poverty, between forever wars and abhorrence of peace, between the rule of law and the other way around.