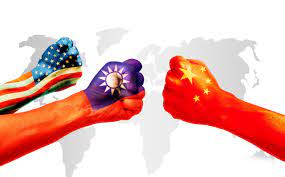 The Unparalleled Scourge of US Imperial Arrogance

On Wednesday, US-dominated G7 foreign ministers pretended to support "peace and stability across the Taiwan Strait and beyond" — ignoring their complicity with perpetual US wars of aggression on invented enemies.

At the same time, they unacceptably slammed China's right to protect and defend its sovereign territory from foreign interference in its internal affairs.

In response, China's Foreign Minister, Wang Yi, firmly refuted their Taiwan-related statement — in support of US imperial arrogance instead of denouncing its scourge.

The Biden regime and Pelosi bear full responsibility for heightened tensions in the Asia/Pacific — what risks crossing the line to East/West confrontation.

According to China's Foreign Ministry on Wang's August 4 remarks, US-dominated G7 foreign ministers "reversed black and white, confused right and wrong, and made groundless accusations against China's reasonable and legitimate measures to safeguard its sovereignty and territorial integrity."

"What gives them the right?"

"Who makes them feel entitled to do this?"

"Today's China" is worlds apart from its 19th century status.

Its ruling authorities will "never" allow foreign hegemons to trample on its sovereign rights again.

They'll do whatever it takes to remain free and independent from foreign control.

And in sharp contrast to the US-dominated West, China supports world peace, stability, cooperative relations among all nations and respect for the rule of law.

In response to Pelosi's arrival in Taipei on Tuesday, Wang called her "manic, irresponsible and highly irrational" — further evidence of US imperial arrogance.

"Reading (its) statement is like being transported back in time."

US-dominated G7 foreign ministers "clearly believe that they still live in the days of the Eight-Power Allied Forces over 120 years ago."

"We no longer live in a world where the imperialist powers could run roughshod over Chinese people on Chinese soil."

"Today's China is not the old China humiliated and bullied over 100 years ago."

"It is time for these people to wake up from their imperial dream."

Those days are gone and won't return.

Pelosi's provocation reflected the "bankruptcy of US politics, (its head-fake) diplomacy and credibility."

Hegemon USA pretense about support for the people of Taiwan, Ukraine and other nations is defied by its war on humanity at home and abroad — by its rage to dominate independent states by brute force and related dirty tricks.

Separately on Friday, Sergey Lavrov slammed US imperial arrogance, its rage to dominate other nations, saying:

"(L)awlessness" defines US policymaking on the world stage.

"(E)veryone" keeping track of its actions knows how it operates.

They know "the futility of (its imperial) policy" longterm.

They know how hegemon USA instigates one "crisis" after another in pursuit of its imperial aims.

Its ruling regimes are hellbent "for cracking down on any form of self-sufficiency."

"This was the case when (the US) turn(ed) Ukraine into a threat for the Russian Federation and ignored the racist policies of (Nazi-infested) Kiev regime."

With US encouragement and  complicity, Ukraine continues going all-out "to eliminate everything Russian."

"This was also the case with Pelosi's visit to Taiwan (by) ignor(ing) principles (the US) publicly declared and assured everyone of (its) steadfast commitment to."

"This was exactly the case in Ukraine, when (it) violated the principles of indivisible security, which (it) signed at the supreme level, and later simply trampled over them" in pursuit of its diabolical aims.

"(O)ur strategic partnership is one of the pillars of the movement for the triumph of international law…above all the UN Charter."

It affirms "the fundamental principle of sovereign equality of states."

Hegemon USA (tramples on) this (core) principle…daily…everywhere, and this demands a response."

In March 2021, Russia, China and 17 other nations formed a Group of Friends in Defense of the UN Charter.

It's "a promising idea that deserves expansion, and we are confident that new members will join its work," said Lavrov.

In support of the rule of law over how the US-dominated West tramples on it, the group said the following:

"The UN Charter and its purposes and principles remain timeless, universal…"

They're "indispensable, not only to preserve and promote international peace and security, the rule of law, the economic development and social progress, but also human rights and to achieve a more peaceful, prosperous, just and equitable world."

In support of what Friends in Defense of the UN Charter stand for, Lavrov Russia and China meet regularly, tak(ing) every opportunity to do so," said Russia's foreign minister, adding:

"(W)e find more and more things that require our constant attention and practical decisions of our states."

Russia and China are attending an ASEAN event in Phnom Penh, Cambodia together with the group's 10 member states — Brunei, Vietnam, Indonesia, Cambodia, Laos, Myanmar, Malaysia, Singapore, Thailand and the Philippines.

Their "goal is to create a stable, prosperous and highly competitive ASEAN economic region in which there is a free flow of goods, services, investment and a freer flow of capital, equitable economic development and reduced poverty and socio-economic disparities."

Hegemon USA's goal is worlds apart from the above.

The same reality applies to its Western vassals.

Together, they represent an unparalleled threat to what the vast majority of people worldwide most cherish — what they want replaced by ruler/serf societies everywhere, along with elimination of billions of unwanted people.