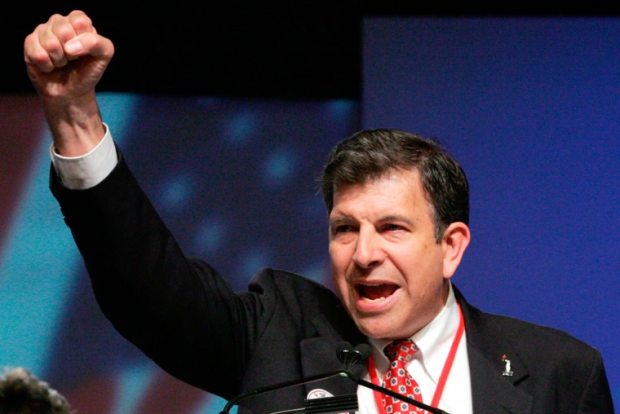 Michael Badnarik (Libertarian Party nominee for President of the United States in the 2004; Individual Liberty Advocate) understood what true freedom really is and spent his life advocating for it. We honor him for his consistent and persistent devotion to making this world a better place.

Please enjoy some of the moments we (and others) have had with Michael over the years...

Michael wrote his own eulogy...

Michael at his 68th birthday party on August 6th - he had a full house of visitors and stayed true to the planned party... from 12PM until 12AM - in true Michael fashion. "It was just so FUN being ME" is something I will never forget him saying about his amazing life.

My name is Michael Badnarik, and apparently, I am dead.  I am not communicating with you from "the great beyond".  I merely had the foresight to write this while I was still a viable consciousness, and I asked a friend of mine to post this to my website for me after I was gone.  This gives me the opportunity to write my OWN eulogy.

If you knew me while I was still warm, you probably noticed that I lived my life by MY rules, and never allowed someone else to dictate what my values were going to be.  Now would be a good time to cue Frank Sinatra's "I did it my way", which I frequently sang in the shower.  It disappoints me to think that this quality made me so unique.  I encourage everyone to stop being so submissive, especially to nonsensical government edicts.  In short, grow up and "grow a pair".
The things that I hope I am remembered for are my honesty and integrity.  I often told people, "Don't ask questions that you don't want the answers to."  It never helps anything to be in denial.  My father was a role model for integrity, and my experience in Scouts reinforced the idea that a truly good and respectable man was someone who was trustworthy.  I tried very hard never to make promises I couldn't keep, and I definitely never made any idle threats.  Most people could tell by the look in my eyes that I was more than willing to carry out the "negative reinforcement" that I was promising.

From an early age my life was one adventure after another.  Scuba diving, sailing, mountain climbing, white water canoeing and rafting.  Don't forget skydiving, but that came later.  I was lucky enough to go through life without much fear of anything.  Keep in mind that fear is a symptom of ignorance.  If you are afraid, the simple solution is to learn as much as you can about that subject.  When you know what you are doing, the fear simply goes away.

Michael on the Declare Your Independence with Ernest Hancock

Michael Badnarik was a man of many talents, but his greatest gift was his ability to inspire others with his passion for freedom. In this video I'll share some of the things that he taught me about life and liberty. FREE How to Know & Defend Your Rights Course | Michael Badnarik https://marketplace.autonomyagora.com/ Richard Grove's FREEDOM Vault https://library.grandtheftworld.com/o...

I am told this morning that Michael Badnarik died in his sleep of heart failure last night.

Michael was a great believer in and defender of freedom and the United States of America and its Constitution. He represented the Libertarian Party as presidential candidate against George W. Bush and John Kerry in 2004. I am proud to have served as his foreign policy adviser during his campaign.

He spent his life inspiring other people's interest in liberty, winning numerous people over to our cause.

He leaves a proud legacy and will not be forgotten.

Michael is a titan when it comes to teaching the Constitution of the United States.

His work will resound into the future as people catch the fire of true Liberty and Natural Rights.

First guy I ever voted for in a general election. Our unlike victor, and a lover of life. Let us pray for the repose of his soul.

First guy I ever voted for in a general election. Our unlike victor, and a lover of life. Let us pray for the repose of his soul.