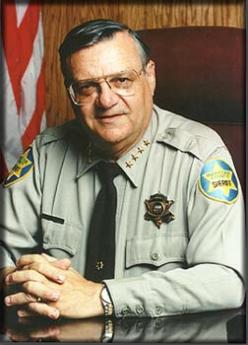 Just talked to Sheriff Arpaio about John Stuart
Sheriff Joe Arpaio and I have a long and interesting relationship that goes back to 1992 and his first run for political office (Maricopa County Sheriff). While almost always on opposite sides of many issues, I respect his ability to manipulate the system and he respects my understanding that he is just a side effect of that system rather than the source of it. It is this mutual understanding that keeps our relationship,... 'friendly'. A good example is a recent conversation to let Sheriff Joe know that we are seeking to recruit a Libertarian candidate for Sheriff to help educate the populace on the proper role of law enforcement and in particular the power of the Sheriff's office to help defend the people against the side effects of the coming “police state”. I made it clear that this campaign really had no need or desire to make it about him or his opponent and that we should just be seen as a 'public service announcement'.
Sheriff Joe and I know each other's abilities to inflict damage and I have always focused my efforts on the 'freeing of minds' and education about the truth of things on a philosophical level. So I am rarely seen as an immediate threat. I know that the ever expanding understanding of how things truly are is foundational to any lasting change the people would support anyway so the targeting of individuals is a waste of time in my opinion since there is a long line of successors waiting to take their place.
I share these things with you so you understand the decade and a half of interactions that Sheriff Joe and I share.
My wife and I are returning to Phoenix now as I write this from visiting friends out of state. My wife got a voice mail from the tearful fiancée of John Stuart being held in a County Jail under the control of Sheriff Arpaio. This call was followed by several emails and phone calls to me wanting to make sure that FreedomsPhoenix knew that they feared for Mr. Stuart's safety while incarcerated due to factors that I have no way of confirming.
I called Sheriff Joe's office and left a simple and short message asking him to please make an effort to insure Mr. Stuart's safety. The Sheriff was kind enough to return my call to let me know that Mr. Stuart had been moved into protective custody and even put the man in charge of the jail that Mr. Stuart was in on the phone with me. “Jack” confirmed that Mr. Stuart was fine and that they had taken steps to make sure he was physically safe.
My conversation with both Sheriff Joe and the head jailer Jack was very pleasant and I relayed my appreciation for their taking action so quickly for the peace of mind of many. I also made it clear that I had no personal opinion on Mr. Stuart's guilt or innocence but that FreedomsPhoenix simply wanted to make certain that all of the facts were allowed to be examined by anyone interested and that the entire process was open and fair.
Thank You Sheriff Joe.
Ernie