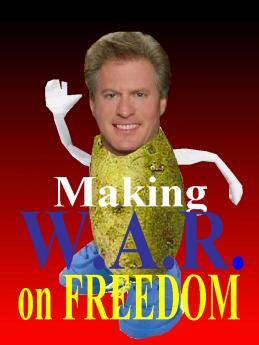 First, I want to say how it warmed my heart to read the postings that accumulated on the article by Wayne Allyn Root, or WAR, as I think of him, on Third Party Watch. It was heart warning to see comments from so many people who understand what the Libertarian Party was intended to accomplish. Even better, one of the links lead to LP Radicals, a site that actually uses the phrase, “Radical Abolitionism.” That brought back a wave of nostalgia.

My great-great-grandfather, Benjamin L. Pillsbury, was a Radical Abolitionist and stopped attending his local church in Sandown, New Hampshire, because the pastor supported the 'law' on slavery and the Civil War. Neither he or his sons served in the Civil War, instead paying the fine to stay home because as radical abolitionists they did not approve of the use of war as a means for promoting Federal power. The Civil War, is more correctly called the Morell (Immoral) Tax War.

The Radical Abolitionists were pro-succession, demanding that the New England states leave the Union and so end their relationship with slave-holders. Parker Pillsbury, his cousin and a good friend of William Lloyd Garrison, frequently stayed at the homestead before and after their basement was used as a stop on the Underground Rail Road.

It is well to remember that our own generation is not the first to deal with “gradualists.” Using the cause of freedom the radicals of the Abolitionist Movement also found themselves sidelined by a campaign that used their rhetoric to establish a Federal State from which we are still struggling to escape.

They tried and failed. We need to keep their example in the forefront of our minds. As Libertarians we need to remember all the ways in which we are enticed to compromise. We need to remember that until the State no longer passes laws that truncate our freedoms, until we are sovereign on our own land and govern ourselves using only persuasion and consensus at the most local level, we are still serfs.

The Libertarian Party came into existence at a time when civil disobedience was understood and respected as a tool in the war for our freedom. We need to remember those lessons.

What you do to thwart the misused power of the state is honorable whether or not it defies statute. Benjamin L. Pillsbury and his wife Sarah Jane knew that and taught the lesson to their children. I learned that from my father. When a conflict exists between statute and the foundation of values for which the Revolution was fought the honorable individual finds the courage that creates the moral example others may follow. This can cost you in many ways but that is the direction for freedom.

That shines a light for others to see.

The Libertarian Party was founded to be that point on the horizon that lights the way to the vision that is still America. After more than 30 years of constant attrition on our freedoms, thanks to predatory opportunists such as Ed Crane, Bob Poole, Koch Industries, and their moral ilk, it is time to think hard about what we have tolerated. Why are we tolerating those who would impede our forward progress by using the rhetoric of freedom for their own ends? Freedom is not about efficiency or profits, it is the power that shines into the life of each individual as they determine for themselves their own course.

For Americans to find that direction for freedom we need to show them, not just talk.

Freedom is for all of us, every one; it is an absolute.

Our most dangerous enemies are those who distort what it means to be free, who seek to use the moral power of Libertarianism for their own profit. They are the enemy within. Such a one is WAR.

In his attempts to eliminate the most consistent voice for freedom available to us as a Presidential candidate, Mary Ruwart, WAR and his cronies have attempted to discredit the vision that a free people govern themselves. They instead assert that only government can protect children. The body of evidence to the contrary is well documented. We are not perfect, any of us, but those who are most likely to ensure the well-being of children are those who love them. A free world does not guarantee that we will all do the right thing, but by empowering the individual we make the right thing far more likely to happen. Look to the children stolen by the State of Texas, look at Waco. Remember Ruby Ridge and the bleeding body of Sammy Weaver, if you doubt.

If WAR thinks his local social worker is more fit, and he may be right, he should, forthwith, send his kids to the state.

As the mother of five, all now grown, who has done advocacy work for families, I can tell him that the individuals' right to self determination must begin early. It is best learned with love and discipline and by protecting children from those who would harm them. That power should always be with those who love, not those who would convert our children into profits.

When I was raising my kids deciding to give birth at home was often seen as child abuse, according to the State. I twice did just that because I knew otherwise. Children born at home, nursed immediately, and kept close, receive benefits you cannot calculate in whatever currency WAR uses in his business.

But we should be grateful for what this has revealed. It does not matter that WAR did not write a word of what appeared under his name, he still told us who he and his supporters are. I agree with David Nolan that the letter sounds like Scott Lieberman or Aaron Starr. That makes perfect sense given their track records.

The WAR campaign doubtless held intensive strategy sessions that delved into possible issues and approaches to defame Ruwart. Hiding behind words is a favored strategy..

All those attempts tried to focus attention on what they present as an unsolvable problem without government, rejecting the idea that people can solve their own problems. These are the people working to continue the conversion of the LP into a tool that enriches them through hierarchy. They are using children to mask their intentions.

Government as it is today puts children, and us, at risk. It was the problem that brought the LP into being. Freedom is my right to live my own life, charting my own course without the interference of government. That is the issue.

Today government and their corporate partners are lurching towards the logical conclusion of viewing us as their property. Using Federalism, they have stolen the wealth that generations of Americans rightly earned, transferring that wealth into their own pockets. WAR and Co. want to pick up some pennies along the way.

WAR is just the latest in a long series of wanna-be power brokers who have tried to wedge themselves into a position that allowed them to profit from the essential truth of Libertarianism by selling our rhetoric in place of the reality of freedom. At best, they are Republican, or NeoCon-lite.

While there are still real 'conservatives,' the ideological position identified by Ron Paul, Goldwater, and Taft most recently, the present leadership of the Republican Party has long been non-ideological. Instead, the GOP focuses on how to position organizations to perpetuate an agenda intended to produce profits in place of individual happiness. Most particularly, they want to deflect attention from the unbridgeable chasm that exists between their own positions and those of a real Libertarian.

WAR and Co. want you to believe that government, Federal and State, are exercising power in the way laid out by the Constitution, that what we see today is in accordance with the vision that inspired the Revolution. They say that reforms are necessary but the system is essentially sound. Only through an ignorance two centuries deep could anyone believe that. The Constitution laid out a limited role for a Federal government, reserving the right of action directly to the people. In this way WAR would lead us to a perpetual serfdom because that is where his greed leads him.

The crew who have adhered themselves to the gravy train of a WAR campaign have an agenda. That agenda makes it essential that they persuade enough delegates that serfdom is freedom and WAR is peace. Therefore they obfuscate, position, and opine. They are all long practiced at the craft of deception by misdirection and fallacious argument.

Their hope is that jobs in the WAR campaign will be followed by jobs in the LP at the national level.

In his comment posted on the WAR article Stephen Gordon said that both he and Knapp are supported by the same organization. He provides a link to United Liberty. Notice that the site endorses Bob Barr for the nomination. Not only is Barr endorsed he is the only one with a listing. Look at the About US page. You will notice that the rhetoric is so bland as to give no one anything to think about. No solutions are suggested there. Now look at the 'solutions' suggested by Americans for Prosperity .

The whole site represents a strategy that deflects attention from the real issue, freedom. It talks about 'direction' but the direction is the same old thing, government. In the list of approved sites are five that are actually American Conservative Union, Americans for Prosperity , Cato Institute , Reason Magazine , The Federalist Society arguably working on enabling the NeoCon agenda through deflection from the real issues and ignoring the role of government in destroying the power of a truly free market.

David Koch is the brother of Cato founder Charles Koch. He is on the Board at Americans for Prosperity. When George Bush went into office in 2001 nearly 400 outstanding violations against Koch Industries were extinguished. The irresponsible behavior by the largest privately owned oil company in the US included a suit resulting from burning alive two teenagers. The company engineers admitted their gas lines were not properly maintained. The Koch and Bush families were linked by marriage at Camp David in 1992.

The issue for Libertarians is simple.

That remains a return to the Constitution, rescinding all statute, reviving the Common Law Court System, and allowing the people to take governance back into their hands at the most local level. Our rights are inherent, granted not by government but by God. Augments over legislation are pointless unless rescinding all law is the agenda.

Americans are daily more aware of their vital need for freedom. Starved of it, they can no longer ignore its absence. They are looking, desperate, ready to take the power into their own hands and live freedom. That is what we saw with the Ron Paul Revolution. Never have the prospects been brighter for relighting the flame of freedom so that its truth can take us home to the America that is yet to be. Go to Denver, relight the flame and extinguish the pretensions of such as WAR.

More WAR details. What other gamblers think of WAR. Where his donations go. Lieberman in 2006

2008, endorsed McCain and Lieberman. The next article will enlighten you to the heretofore unknown roots of Root prosperity.

Now about this CONstitution thingy.